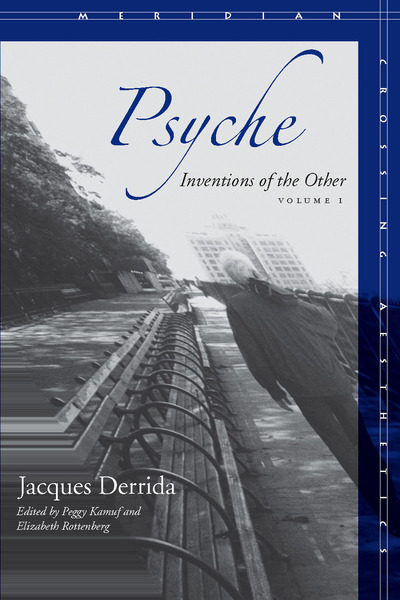 Included in the 2007 Best Books Award, sponsored by the Artforum.

Psyche: Inventions of the Other is the first publication in English of the twenty-eight essay collection Jacques Derrida published in two volumes in 1998 and 2003. In Volume I, Derrida advances his reflection on many topics: psychoanalysis, theater, translation, literature, representation, racism, and nuclear war, among others. The essays in this volume also carry on Derrida's engagement with a number of key thinkers and writers: Barthes, Benjamin, de Man, Flaubert, Freud, Heidegger, Lacoue-Labarthe, Levinas, and Ponge. Included in this volume are new or revised translations of seminal essays (for example, "Psyche: Invention of the Other," "The Retrait of Metaphor," "At This Very Moment in This Work Here I Am," "Tours de Babel" and "Racism's Last Word"), as well as three essays that appear here in English for the first time.

Jacques Derrida (1930-2004) was Director of Studies at the Ecole des Hautes Etudes en Sciences Sociales and Professor of Humanities at the University of California, Irvine. Among the most recent of his many books to have been translated into English are H. C. for Life, That Is to Say (2006), Paper Machine (2005), On Touching—Jean-Luc Nancy (2005), Rogues (2005), and Eyes of the University(2004). All of these have been published by the Stanford University Press. Peggy Kamuf is Professor of French and Comparative Literature at the University of Southern California. Elizabeth Rottenberg is Assistant Professor of Philosophy at DePaul University, Chicago.

"Derrida's writing is never easy, but the 16 pieces gathered here are exceptionally lucid and clearly translated, and they offer a useful, engaging entrée to Derrida's work for advanced undergraduates and all graduate philosophy students."

Named one of ArtForum's Best Books of 2007!"Psyche offers a wide-ranging introduction to Derrida's engagement with the ethicopolitical implications of deconstruction and psychoanalysis. Here, his meditations on mourning, specularity, memory, performativity, and much else are framed in what he describes as the 'quasi-epistolary situation' of the collected essays."

"A highly analytical and thoughtful compendium of meticulous reasoning, and a welcome addition to philosophy shelves and libraries."

"There is no better place to understand the astonishing scope, inventiveness, brilliance, and coherence of Derridean deconstruction than this magnificent collection. To reverse Plato's famous dictum identifying the body as but the sign or sepulcher of the soul, Psyche is today the most living sign of Derrida's singular and indispensable body of work."

"This monumental collection of essays shows Derrida at his brilliant best, across a vast and diverse range of topics, texts, authors and manners. From the hugely important essays around concepts such as invention, silence, translation or metaphor, on Heidegger, Ponge, Levinas, Flaubert, Benjamin, Freud or Barthes, through the densely beautiful and only apparently more occasional pieces on de Certeau or Laporte, to the important political interventions on racism, apartheid or nuclear deterrence, Psyche is among the richest and most diverse of all Derrida's books, and a testimony to the extraordinary depth and vigor of deconstructive thought." 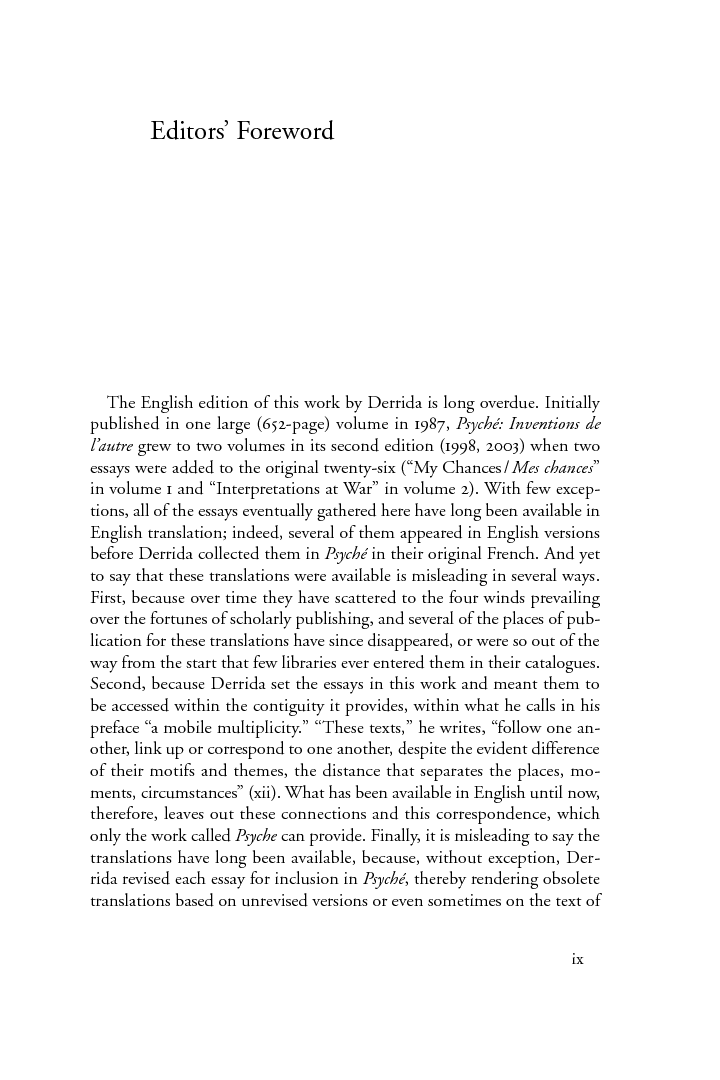 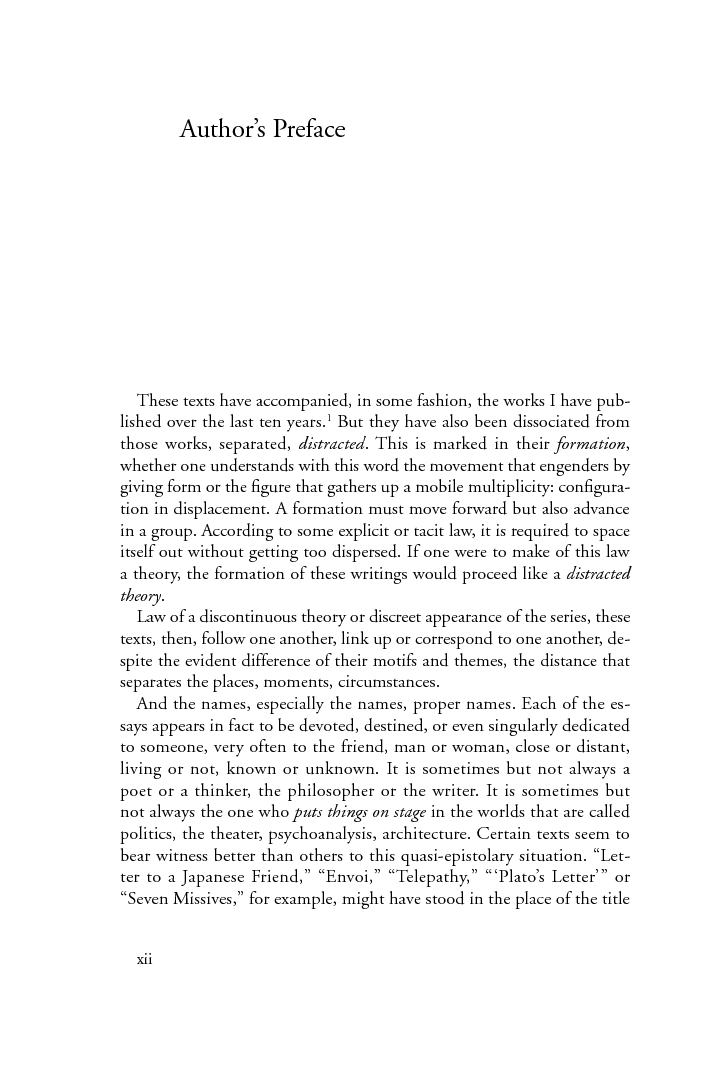 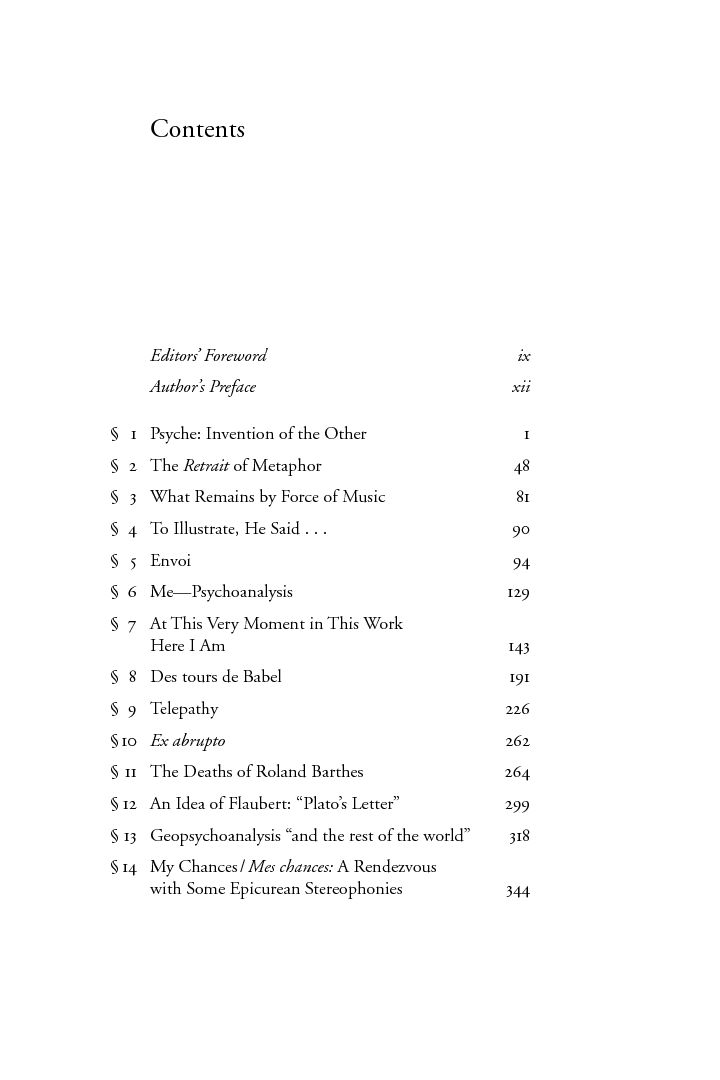