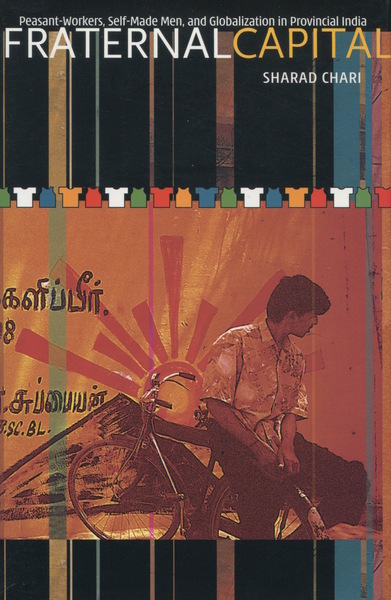 Fraternal Capital examines class, gender, and work in Tiruppur, South India, where export of knitted garments has been led by a networked fraternity of owners of working-class and Gounder caste origins, who explain their class mobility as hinging on their "toil." This book asks how these self-made men drew from their agrarian past to turn Gounder toil into capital, and how they continue to make an entire town work for the global economy.

Fraternal Capital decenters understandings of global capitalism by linking agrarian transition with the adaptation of a singular past in the interests of accumulation. As Tiruppur shifts to global production, this book tracks ways in which gender links sexed bodies to processes of differentiation, in the tenuous search for consent to increasingly despotic work politics. Tiruppur demonstrates the importance of gender and geography to the globalization of capital as it affects the lives of working people in provincial India and elsewhere. This book links the political economy of development to postcolonial and cultural studies, rooting the analysis of globalization ethnographically and geographically. Fraternal Capital provides a window into a decentralized capitalism and thereby critiques macroeconomic portrayals of globalization by showing how history, geography, gender, and work practice shape local sites of global production.

Sharad Chari is Lecturer in Human Geography at the London School of Economics and Senior Research Fellow in the School of Development Studies, University of KwaZulu-Natal.

"This important book... presents a theoretically and empirically elaborate refutation of the idea that forces emanating from a Western-derived and dominated global capitalism explain the forces of capitalist development in provincial sites such as Tiruppur."

"The boom fashion-town of Tiruppur in South India has attracted intellectual as well as manual workers. In the boom in scholarly literature, Sharad Charis meticulous ethnography is outstanding. It puts the concept of accumulation back onto the catwalk. It relates industrial accumulation to the agrarian origins not just of capital but also of the labour process and elaborates a peasant-worker route to accumulation. It also reveals the way culture shapes work and work shapes culture. These are not just major contributions to our knowledge of clusters and industrial districts, they are also very useful contributions to the critical understanding of globalised capital."

"Fraternal Capital is an exemplary study of the paradoxical formation of a class of peasant-workers in urban South India who drew on their agrarian past to fashion themselves as a community of fraternal capitalists. Chari examines this process genetically, revealing how the labor that produced this transformation is the synthesis of multiple relations and embodies the history of these relations. He brilliantly illuminates this history by weaving together its complex strands, linking town and country, individuals and communities, local and world markets, past and present. Through Charis caring intellectual labor, this capitalism appears as intimately fraternal and yet as violently divisive, as unusually distinct and yet as uncannily familiar, its singularity showing how the global history of capital is also always provincial."

"Rather than explaining capital accumulation as a consequence of global and national shifts, Fraternal Capital explores the agrarian and proletarian origins of the fraternity of decentered capital in Tiruppur. Charis marvelously insightful and original analysis shows how gendered hegemony functions in networks of small firms to convert Gounder toil into global capital, to make Tiruppur a centerpiece of globalization in provincial India. This book challenges dominant paradigms of development and late industrialization, transcending several disciplinary boundaries to provide a fascinating account of gender and capital in provincial India."

" . . . Fraternal Capital does an impressively nuanced, and theoretically rigorous job of foregrounding the local sites of the operation of global capital in Tiruppur, a small town in South India."