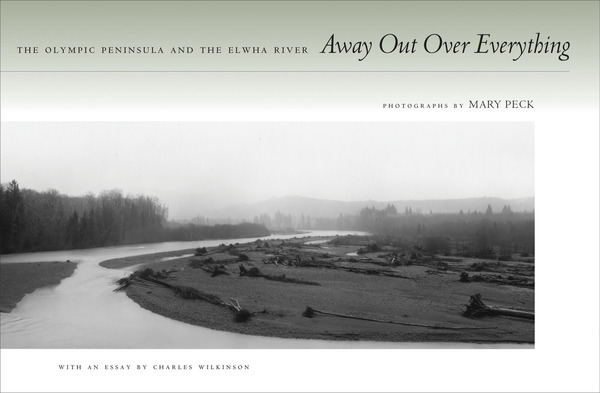 Away Out Over Everything
The Olympic Peninsula and the Elwha River
Photographs by Mary Peck, With an Essay by Charles Wilkinson

Inspired by long walks and extended backcountry trips on Washington's Olympic Peninsula, Mary Peck's contemplative photographs evoke the stillness and balance one can find by slowing down and simply paying attention. Neither idealized nor nostalgic, Peck's photographs point toward beauty and hope in a landscape that has suffered its share of environmental indignities, yet still carries the powerful mystery of wildness into an uncertain future.

Charles Wilkinson's illuminating essay traces historical attitudes toward land and water in the American West, and reflects on the now-outmoded laws that have governed development for nearly two centuries. With the impending removal of two dams, erected on the Elwha River almost one hundred years ago, wild salmon, long prevented from reaching upstream spawning areas, are about to return and restore their ancient runs on one of the most diverse and productive streams in the country.

Images and text afford us glimpses of the primeval power that still lingers in this wild place. Peck’s meditations on the roadless ocean beaches, the emerald river valleys with their old-growth temperate rain forests, and the denuded hillsides urge the reader to acknowledge the less tangible values we must consider in managing our natural resources.

Mary Peck has been photographing landscape in various parts of the world for over thirty years. Her work has been exhibited, and her photographs are held in many collections throughout the world, including the Museum of Modern Art in New York, the San Francisco Museum of Modern Art, the Museum of Fine Arts in Houston, the Denver Art Museum, and the Amon Carter Museum. She is the principal author of Chaco Canyon: A Center and Its World, and is currently completing work on a book of photographs from Bhutan. She lives on the Olympic Peninsula.

Charles Wilkinson, Distinguished University Professor and Moses Lasky Professor of Law at the University of Colorado, is the author of twelve books, including Crossing the Next Meridian, The Eagle Bird, and Messages from Frank's Landing.