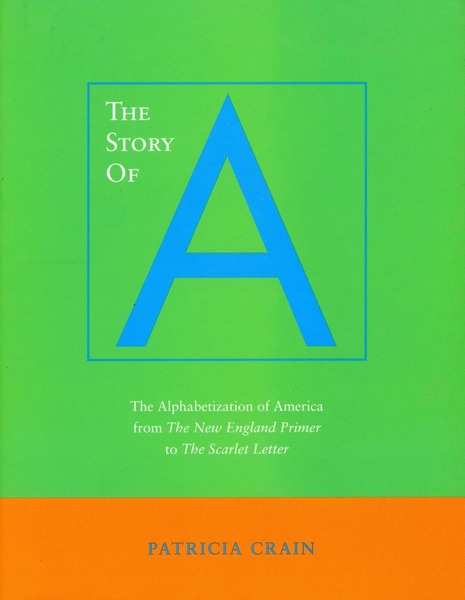 Richly illustrated with often antic images from alphabet books and primers, The Story of A relates the history of the alphabet as a genre of text for children and of alphabetization as a social practice in America, from early modern reading primers to the literature of the American Renaissance.

Offering a poetics of alphabetization and explicating the alphabet's tropes and rhetorical strategies, the author demonstrates the far-reaching cultural power of such apparently neutral statements as "A is for apple." The new market for children's books in the eighteenth century established for the "republic of ABC" a cultural potency equivalent to its high-culture counterpart, the "republic of letters," while shaping its child-readers into consumers. As a central rite of socialization, alphabetization schooled children to conflicting expectations, as well as to changing models of authority, understandings of the world, and uses of literature.

In the nineteenth century, literacy became a crucial aspect of American middle-class personality and subjectivity. Furnishing the readers and writers needed for a national literature, the alphabetization of America between 1800 and 1850 informed the sentimental-reform novel as well as the self-consciously aesthetic novel of the 1850s. Through readings of conduct manuals, reading primers, and a sentimental bestseller, the author shows how the alphabet became embedded in a maternal narrative, which organized the world through domestic affections.

Nathaniel Hawthorne, by contrast, insisted on the artificiality of the alphabet and its practices in his antimimetic, hermetic The Scarlet Letter, with its insistent focus on the letter A. By understanding this novel as part of the network of alphabetization, The Story of A accounts for its uniquely persistent cultural role. The author concludes, in an epilogue, with a reading of postmodern alphabets and their implications for the future of literacy.

"Imaginatively conceived, elegantly written, The Story of A is one of the most original works I have read in recent years. Through her insightful, witty account of alphabetization in America, Crain detects shifting views of childhood, women, the family, and the relations between the individual and society, thus illuminating central questions in social and cultural history. The Story of A will make Patricia Crain's name in literary studies and American studies."

"The alphabet is so foundational to the act of reading that scholars have tended to take it for granted. Crain's book is one of those rare and spectacular scholarly works that actually creates an object of inquiry and a new way of reading where previous scholarship has presumed there was nothing to see."

The Story of A is a richly rewarding book. . . . Through her skilled examination of images and texts, Crain has discovered the very real existence of historically distinctive modes whereby the alphabet was represented, then linked these changing modes to such historicalo phenomena as Puritan theology, the consumer revolution, and domesticity in ways that are always thought-provoking and ususally convincing."

—Journal of the Early Republic

"This is a most unusual book: fascinating, original, informative, amusing . . . not one's ordinary reading fare."

"Copiously illustrated and beautifully produced, Crain's The Story of A is a pleasure to hold, look at, and read. Playful and allusive in her treatment of texts, Crain's wide-ranging analysis includes commentary on such present-day communication technologies as postmodern art, children's television programming, and the World Wide Web."

"Just awarded the MLA's best first book award for the year 2000, the work is guided by philological savvy and bibliographical finesse, and cultural critics would do well to learn from what might be called a materialist history of imaginative language. But there are less grand and more profound pleasures in The Story of A. In a voice that casts a spell, Patricia Crain joins Spengemann and David Shields among early American literary criticism's best prose stylists. Through innovative research and iconographical analysis, the author has made alphabetization a new object of study."

"Of the recent path-breaking studies that have explored the material relations of word, image, and literary text in early American culture, Patricia Crain's book, The Story of A, has added a new dimension, as well as set a new standard in the field of early American scholarship."

"The book impresses constantly with its scholarly scope while dazzling the reader with its intensity and intellectual rigor. Aside from its fresh and incisive argument, the book's meticulously researched archive of early American primers, ABC books, and literacy manuals delineates (in 70 images!) the changing morphology of alphabetic education."

"In this highly original book, Patricia Crain transforms historical analysis and literary close-readings into a refreshing style of scholarship that is as lucid and pertinent as it is suggestive and provocative. Its conceptual and material range makes it a truly exceptional work that will become a required reading for students across the disciplines in literature, history, art history, and education. The Story of A is in a league of its own in the field of eighteenth-century transatlantic scholarship."

“The Story of A makes the alphabet a touchstone of cultural change in the United States and a key element in an expanding print culture across two centuries. . . . [It] points to exciting directions for future work on the interplay between the multiple forms of literacy, literature, and culture.”—American Quarterly