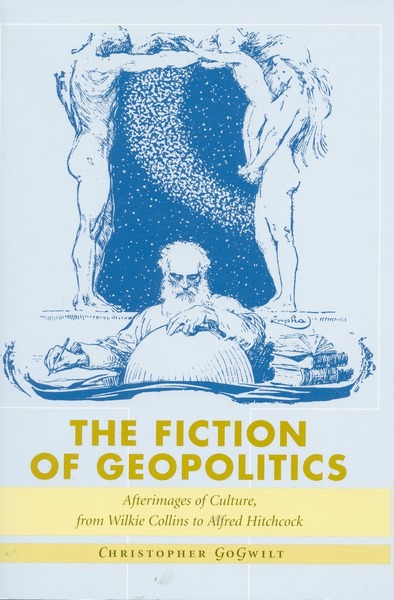 The Fiction of Geopolitics
Afterimages of Culture, from Wilkie Collins to Alfred Hitchcock
Christopher GoGwilt

Studying a range of writers, genres, and disciplines, this book interrogates the status of geopolitics as a powerful twentieth-century fiction. The first part argues, through a reading of anarchist and imperialist geographers, that geopolitics emerged as a pseudoscience from the breakdown of nineteenth-century ideas of culture.

The book’s second part addresses the fate of the European hypothesis of culture, beginning with a chapter that studies the novels of Wilkie Collins within the historical context of democratic reform and the formalization of Empire. The next chapter finds, in the affinities between Olive Schreiner and Friedrich Nietzsche, a shared diagnosis of the nihilist positivism and eurocentrism of the culture hypothesis.

The third part examines the relation between the utopian globalism of international socialism and the geopolitical dystopia of world war. One chapter delineates the geography of politics in the 1890s through the medium of R. B. Cunninghame Graham’s political journalism and early modernist sketch-artistry. The final chapter traces the meaning of “sabotage” from its anarcho-syndicalist origins to its geopolitical significance in early films of Alfred Hitchcock.

Charting the contours of the long turn of the century, from 1860 to 1940, the book moves back and forth from Victorian to modernist fields of study to show how the nineteenth-century European hypothesis of culture haunts the twentieth-century fiction of geopolitics.

Christopher GoGwilt is Associate Professor of English and former Director of Literary Studies at Fordham University. He is the author of The Invention of the West: Joseph Conrad and the Double-Mapping of Europe and Empire (Stanford, 1995).