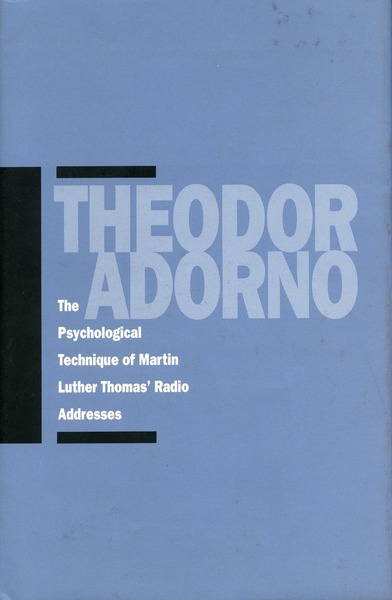 Theodor W. Adorno (1903-1969) was one of the twentieth century’s most influential thinkers in the areas of social theory, philosophy, aesthetics, and music. This volume reveals another aspect of the work of this remarkable polymath, a pioneering analysis of the psychological underpinnings of what we now call the Radical Right and its use of the media to propagate its political and religious agenda.

The now-forgotten Martin Luther Thomas was an American fascist-style demagogue of the Christian right on the radio in the 1930s. During these years, Adorno was living in the United States and working with Paul Lazarsfeld on the social significance of radio. This book, Adorno’s penetrating analysis of Thomas’s rhetorical appeal and manipulative techniques, was written in English and is one of Adorno’s most accessible works. It is in four parts: “The Personal Element: Self-Characterization of the Agitator,” “Thomas’ Methods,” “The Religious Medium,”and “Ideological Bait.” The importance of the study is manifold: it includes a theory of fascism and anti-semitism, it provides a methodology for the cultural study of popular culture, and it offers broad reflections on comparative political life in America and Europe.

Implicit in the book is an innovative idea about the relation between psychological and sociological reality. Moreover, the study is germane to the contemporary reality of political and religious radio in the United States because it provides an analysis of rhetorical techniques that exploit potentials of psychological regression for authoritarian aims.