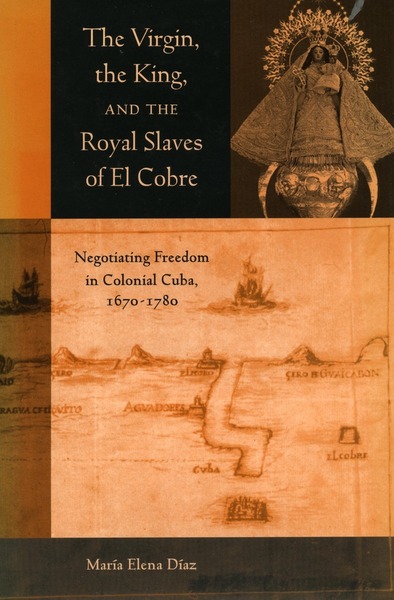 This book tells the extraordinary story of a village of peasants and miners in late seventeenth- and eighteenth-century Cuba who were slaves belonging to the king of Spain and whose local patroness was a miraculous image of the Virgin of Charity of El Cobre. In reconstructing this history, the book reveals that in Cuba’s eastern region, slavery to the King became a very ambiguous form of slavery that evolved into forms of freedom unprecedented in other colonial societies of the New World.

The author studies the relations that developed between the Virgin, the King, and the royal slaves as the enslaved villagers imagined and negotiated social identity and freedom in this Caribbean frontier society. In the process, she examines several dimensions of the royal slaves’ daily and imaginary lives. Drawing on a range of cultural, social, political, and economic sources, this book presents a multisided history of enslaved people as they remade colonial spaces and turned them into a new homeland in El Cobre. As they produced social memory and appropriated popular religious traditions centered on the Virgin of Charity, they reinvented their past and present as a new people within the structures and strictures of Spain’s colonial world.

María Elena Díaz is Associate Professor of History at the University of California, Santa Cruz.

"This fascinating book treats issues of broad, interdisciplinary significance in original and stimulating ways, lending historical depth and concreteness to problems that are often pursued too abstractly. This is the best sort of history, one that will have an impact on the historical study of Latin America and the Caribbean, as well as on the fields of anthropology and cultural studies."

"This is an excellent example of just how sophisticated scholarship on early Cuban history has become. . . . The book looks at a host of subjects: eastern Cuba (too often neglected by scholars); religious history through the emergence of the shrine of Our Lady of Charity; rural economic activity in a non-sugar-producing area; and the institution of Spanish slavery. Díaz's book will be a reference point for future studies in all these areas. . . . Professional historians will appreciate how Díaz extracts social and narrative history from a variety of disjointed and fragmentary materials. . . . The Virgin, the King, and the Royal Slaves of El Cobre provides its readers with surprises and puzzles at almost every turn."

"This outstanding history of colonial El Cobre during the seventeenth and eighteenth centuries explores the ways that royal slaves negotiated their condition, and the way that popular religion, focused on Our Lady of Charity, underwrote their efforts."

"María Elena Díaz's The Virgin, the King and the Royal Slaves of El Cobre examines a fascinating and little known episode of Cuban and Afro-Latin American history...In the process of telling this remarkable story, Díaz offers rich asides on the cobreros' social, economic, cultural, and religious life."

"This book is a gem. It is carefully researched, elegantly written, exquisitely crafted, and poignantly personal. . . . The most notable characteristic of Diaz's superb analysis is her adroit command of the conceptual fameworks of several conventional and crossborder disciplines, among them history, anthropology, sociology, and cultural studies. . . . Diaz has chosen to transcend the constraints of disciplinary demarcation to offer a remarkable adventure into the past."

"Diaz's study offers new insights into slavery and invites comparisons with other colonial slave societies of the Americas."

"In itself, this is a fascinating and perhaps unique story. The author, however, is to be congratulated for the extensive research that she undertook to flesh out the narrative and make her analysis all the richer and more satisfying . . . .This is a book that will naturally be read by those who study slavery but it will also be useful for those examining the creation of community identity and the engagement of the less powerful within a colonial society."

"This is an excellent book that represents a prime example of the jeux d'echelles of the historical view and the application of micro history, yet without losing sight of social history or other contexts...Without question, this is an important book that belongs in every research library."

“Using the intimate details of village life, Diaz brings historical insight to bear on the Virgin’s popularity, and, in the process, breaks down longstanding assumptions about slavery and colonialism in Cuba.”—David Sartorius, University of North Carolina