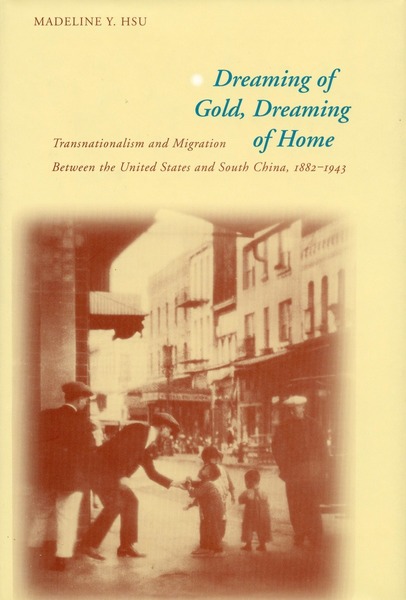 Winner of the 2001 Award in History, sponsored by the Association for Asian American Studies.

This book is a highly original study of transnationalism among immigrants from Taishan, a populous coastal county in south China from which, until 1965, the majority of Chinese in the United States originated. Drawing creatively on Chinese-language sources such as gazetteers, newspapers, and magazines, supplemented by fieldwork and interviews as well as recent scholarship in Chinese social history, the author presents a much richer depiction than we have had heretofore of the continuing ties between Taishanese remaining in China and their kinsmen seeking their fortune in “Gold Mountain.”

Long after the gold in California ran out and prejudice confined them to dismal Chinatowns, generations of Chinese—mostly men from rural areas of southern China—continued to migrate to the United States in hopes of bettering the family’s lot by remitting much of the meager sums they earned as laundrymen, cooks, domestic workers, and Chinatown merchants.

Economic hardships and U.S. Exclusion laws extended the immigrants’ separation from their families for decades, “sojourns” that in many cases ended only in death. Men lived as bachelors and their wives as widows, parents passed away, and children grew up without ever seeing their fathers’ faces. Families and village communities had to adapt to survive the stress of long-term, long-distance separation from their primary wage-earners.

At the same time, men raised in the rural communities of a faltering imperial China had to negotiate encounters with an industrializing, Western-dominated, often hostile world. This history explores the resiliency and flexibility of rural Chinese, qualities that enabled them to preserve their families by living apart from them and to survive the intertwining of their rural world with global systems of race, labor, and capital. The author demonstrates that through migration to dank and narrow enclaves, they came to live, and even to flourish, in a transnational community that persisted despite decades of separation and an ocean’s width of distance.

Madeline Y. Hsu is Associate Professor of History at the University of Texas, Austin, and Director of the Center for Asian American Studies.

"An outstanding book, and exemplar of how to do a transnational study that captures the often globe-spanning histories of migrants out of Asia. . . . Hsu's imaginative use of both English and Chinese language sources is impressive. . . . Besides being a wonderful archival historian, Hsu also writes well, and she weaves a tapestry of the larger contexts of historical events in both China and the United States by threading in the poignant examples of individual lives."

"A work of impressive scholarship—there is new and important information on almost every page of this book. It will be required reading for Asian Americanists, immigration historians, students of transnationalism and diaspora, and social historians of 20th-century China."

"This well-researched book is an important addition to the literature on Chinese American history; and as a well-written social history with insights into the key links between Taishan and America, it enhances our understanding of the richness and complexities of Taishanese transnational experiences."

"Most previous studies have tended to set the spotlight on the Gold Mountain, and had very little data on the impact of overseas Chinese immigrants on their homeland. The present volume fills this research gap. It demonstrates how a transnational approach can print a balance sheet showing how the Taishanese measured the long periods of hardship they endured in the Gold Mountain against the opportunities to actualize their committments to their families in Taishan and to thd Taishan community. Unlike other studies of the Chinese in America, this volume tells a complete story."

"Hsu, a third-generation Chinese American, has a facility in her ancestral language unusual for members of her generation, so that this work has the bilingual strengths usually associated with China-born scholars."

"A superior achievement. It is clearly written, based on a wide variety of sources in two languages from two continents, and closely and acutely reasoned. One hopes to see more work from this most promising young scholar."

"This imaginatively conceived and researched study illustrates the possibilities offered by a transnational approach to the study of migrant populations but also some of the fundamental problems it presents. The study draws skillfully upon contemporary reconceptualizations of migration that seek to overcome the limitations of nation-based approaches . . . .Hsu presents an informative and illuminating account of migration to North America from the Taishan county of Guangdong province on South China and its consequences for Taishan economy and society . . . .The author is successful throughout in bringing to light previously unknown material and adding valuable detail to earlier studies of Chinese migrant experience in China and the United States."

"This is a wonderful book. It is a work of the highest scholarly standards, impeccably researched, and is also readable, touching, and perceptive."

“Recipient of the 2002 Association of Asian American Studies’ book award, Hsu is able to call on her talents as both a Chinese and Asian American historian to weave a transnational analysis of the immigration history of Taishanese in both locations.”—Journal of Asian Studies