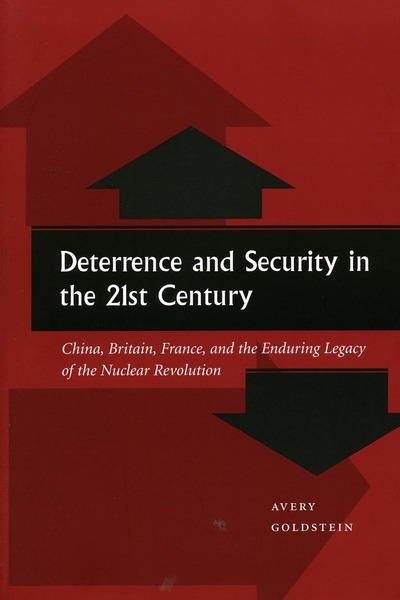 Deterrence and Security in the 21st Century
China, Britain, France, and the Enduring Legacy of the Nuclear Revolution
Avery Goldstein

Much recent writing about international politics understandably highlights the many changes that have followed from the collapse of the Soviet Union and the end of the Cold War. This book, by contrast, analyzes an important continuity that, the author argues, will characterize international strategic affairs well into the new century: nuclear deterrence will remain at the core of the security policies of the world's great powers and will continue to be an attractive option for many less powerful states worried about adversaries whose capabilities they cannot match.

The central role of nuclear deterrence persists despite the advent of a new international system in which serious military threats are no longer obvious, the use of force is judged irrelevant to resolving most international disputes, and states' interests are increasingly defined in economic rather than military terms. Indeed, the author suggests why these changes may increase the appeal of nuclear deterrence in the coming decades.

Beginning with a reconsideration of nuclear deterrence theory, the book takes issue with the usual emphasis on the need for invulnerable retaliatory forces and threats that leaders can rationally choose to carry out. The author explains why states, including badly outgunned states, can rely on nuclear deterrent strategies despite the difficulty they may face in deploying invulnerable forces and despite the implausibility of rationally carrying out their threats of retaliation. In the subsequent empirical analysis that examines the security policies of China, Britain, and France and taps recently declassified documents, the author suggests that the misleading standard view of what is often termed rational deterrence theory may well reflect the experience, or at least aspirations, of the Cold War superpowers more than the logic of deterrence itself.

Case studies assessing the nuclear deterrent policies of China, Britain, and France highlight the reasons why their experience, rather than that of the more frequently studied Cold War superpowers, better reflects the strategic and economic factors likely to shape states' security policies in the twenty-first century. The book concludes by drawing out the implications of the author's theoretical and empirical analysis for the future role of nuclear weapons.

Avery Goldstein is Professor of Political Science at the University of Pennsylvania and Director of the East Asia Program, Foreign Policy Research Institute, Philadelphia.

"Goldstein's excellent book helps explain why three very different countries—Britain, France, and China—all sought an independent nuclear deterrent despite, and, perhaps, because of their security alliances with nuclear superpowers. This accessible and well-crafted work will be useful not only to diplomatic historians and international relations theorists, but also to policy analysts who are examining why certain relatively weak states are currently pursuing the nuclear option."

"A decade after the end of the cold war, nuclear issues have come to the fore again, but the focus now is much less on superpowers and much more on middle or regional powers. In a subtle combination of theory and empirical cases, Professor Goldstein examines the trade offs confronting states considering the nuclear option. This book is essential reading for anyone studying deterrence theory or nuclear proliferation."

"This is a semitheoretical survey of the security policies of three middle powers . . . during the last half of the twentieth century, with an argument that their common experiences form a useful template for predicting the future role of nuclear weapons, including proliferation. The three case studies are superbly done."

"This book is welcome for the historical analyses of the smaller nuclear powers. . . ."

"Deterrence and Security in the 21st Century is a valuable and provocative contribution to the current debate about the future of nuclear deterrence."

Journal of Strategic Studies
More in Politics—Comparative and International Politics