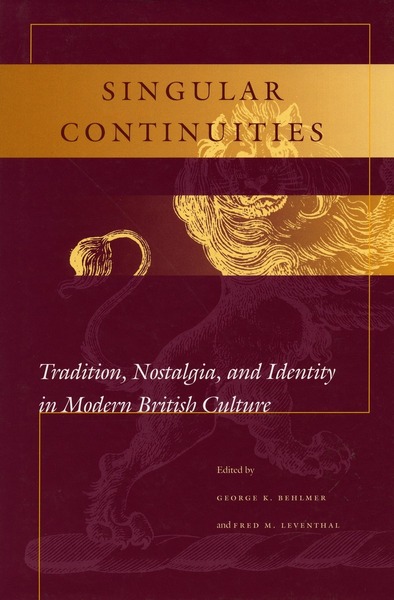 This volume explores the appropriation of the past in modern British culture. Today, at the beginning of a new millennium, the mass media would have us believe that Britain is suffering an identity crisis. If the pundits are correct, we are witnessing a manipulation of British history at the hands of those keen to project a new national image—or in the language of commodification, to "rebrand" Britain.

The twelve essays in Singular Continuities take a different tack. They argue that to distinguish between "the new" and "the traditional" in modern English culture often draws a false dichotomy, that British-ness, in fact, has been the product of continuous creation throughout the nineteenth and twentieth centuries. The contributors strongly suggest that "tradition" derives from constant reimagining, if not from calculated invention.

Such reimagining has often assumed surprising forms. Thus, for example, at the end of Victoria's reign, an "enemy" culture—that of the Boer farmer—was recruited to the British ideal of pastoral self-sufficiency. Similarly, the iconoclastic surrealism of the interwar artist Humphrey Jennings was actually suffused with a celebratory sense of the British past. And during the 1970s and 1980s, working-class autobiography eulogized not the triumph of character over circumstance but rather an industrial nostalgia that recalled a cityscape where slum neighbors once knew their turf and the people who occupied it. Related themes are pursued in essays that range from the demonizing of Irish immigrants in early-Victorian London to the impact of reading on suffrage activism, from the professionalization of social work to the selling of the past in Thatcher's Britain.

What has been termed "heritage-bashing" finds few echoes in this collection. "Heritage" is a remarkably protean notion, as useful to the political left as to the right, to feminists as well as to would-be patriarchs. It is the malleable nature of British cultural continuity that makes its heritage "singular."

"While each of these essays can be read individually, and a review summary cannot even begin to do justice to the richness of the themes and arguments that they contain, their collective impact is to provide a new level of understanding about the varieties and persistence of tradition and nostalgia in modern British history."