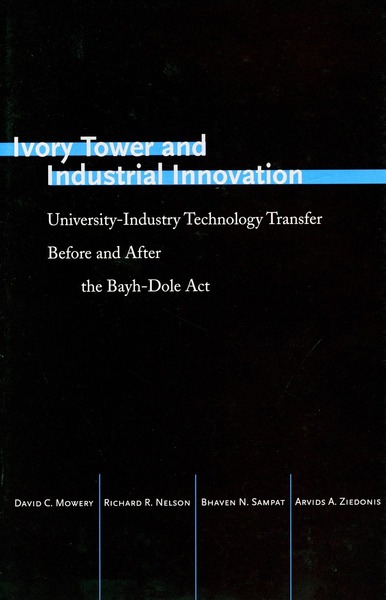 Since the early 1980s, universities in the United States have greatly expanded their patenting and licensing activities. The Congressional Joint Economic Committee, among other authorities, have argued that this surge contributed to the economic boom of the 1990s. And, many observers have attributed this trend to the Bayh-Dole Act of 1980. Using quantitative analysis and detailed case studies, this book tests that conventional wisdom and assesses the effects of the Act, examining the diverse channels through which commercialization has occurred over the 20th century and since the passage of the Act.

David C. Mowery is William A. & Betty H. Hasler Professor Emeritus of New Enterprise Development at the Walter A. Haas School of Business at University of California, Berkeley. Richard R. Nelson is George Blumenthal Professor of International and Public Affairs, Business, and Law at Columbia University. Bhaven N. Sampat is Associate in the Department of Health Policy and Management at Columbia University's Mailman School of Public Health. Arvids A. Ziedonis is a Visiting Scholar at the Stanford Institute for Economic Policy Research.

"This book addresses an important and timely topic which has garnered substantial interest among policymakers, academic analysts, and the broader scientific and technical community. It reflects over a decade of careful qualitative and quantitative research by these authors. This collection brings together their most interesting work in this important area."

"This clear and succinct volume convincingly overturns the conventional wisdom about university-industry relations in science and technology. The authors muster extensive historical and contemporary empirical evidence to build a robust and nuanced conception of the transfer of knowledge between the two sectors. This work warrants close attention from academic administrators, research managers, and public policy-makers in the U.S. and abroad."

"This splendid volume offers a nuanced and sophisticated assessment of the growing ties between universities and industry, arguing that public policy was a facilitator but not a catalyst and that university R&D faces threats from its growing proprietary emphasis. No student or analyst of the R&D process, or university administrator, should ignore the message of this book that the preeminence of U.S. universities rests upon a commitment to open science, and that it is precisely that openness that enhances industrial innovation."

"A welcome and thoughtful study that sheds light on an important contemporary policy area and reveals the facts behind some of the myths about successful technology transfer from university to industry in the United States. This book, written by some of the foremost experts in this area, should be required reading for all economists and policy makers concerned with innovation strategies."

"Ivory Tower and Industrial Innovation is an enormously important book for the simple reason that it provides extensive credible empirical data that have been hitherto missing in debates on the effects of Bayh-Dole."

"Critics of university patenting would be wise to read this nuanced analysis, and supporters would be equally advised to ponder the authors' misgivings."

—The Review of Higher Education