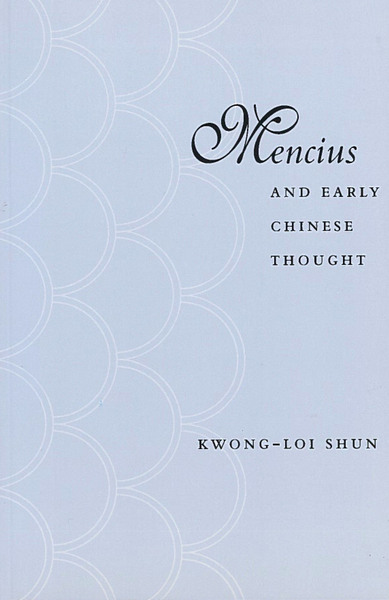 Throughout much of Chinese history, Mencius (372-289 b.c.) was considered the greatest Confucian thinker after Confucius himself. Following the enshrinement of the Mencius (an edited compilation of his thought by disciples or disciples of disciples) as one of the Four Books by Sung neo-Confucianists, he was studied by all educated Chinese.

This study begins a reassessment of Mencius by studying his ethical thinking (how one should live) in relation to that of other early Chinese thinkers, including Confucius, Mo Tzu, the Yangists, and Hsün Tzu. It is the first of three planned studies on Mencius: the second volume will examine the reception and development of Mencian ideas by later thinkers, and the third will be a general philosophical discussion of Confucian ethics.

"With this ambitious undertaking, Shun is trying to become the definitive modern interpreter of Mencius, and in this volume he succeeds. . . . The book works at many levels and satisfies at each. For the sinologist it is thorough and precise, and for the ethicist and comparative philosopher it has much to offer as well."

"This book is an excellent resource for those interested in Mencian philosophy. . . . The author has given us a textual study that is philosophically illuminating and thought-provoking."

"This impressive book studies Mencius's ethical though in its own terms and against competing contemporary thinkers. . . . Shun's scrupulous use of evidence gives full consideration to all possible views, not only those he favors. No one has heretofore treated this material with such convincing attention or sharpened our views of Mencius's thinking to this high glint."

"Valuable as a reference source, it proviedes a way for us to get acquainted with current Mencius scholarship. Shun's meticulous analysis of such key concepts as ren and yi in the Mencius and other ancient texts not only demonstrates his erudition but renders a wonderful service to any students of early Chinese thought."