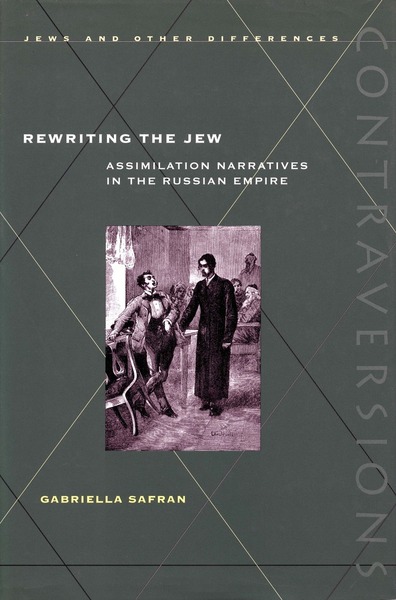 Winner of the 2001 Aldo and Jeanne Scaglione Prize for Studies in Slavic Languages and Literatures, sponsored by the Modern Language Association.

Winner of the 2002 Best Book in Literary/Cultural Scholarship Award, sponsored by the American Association of Teachers of Slavic and Eastern European Languages.

In the Russian Empire of the 1870s and 1880s, while intellectuals and politicians furiously debated the "Jewish Question," more and more acculturating Jews, who dressed, spoke, and behaved like non-Jews, appeared in real life and in literature. This book examines stories about Jewish assimilation by four authors: Grigory Bogrov, a Russian Jew; Eliza Orzeszkowa, a Polish Catholic; and Nikolai Leskov and Anton Chekhov, both Eastern Orthodox Russians. Safran introduces the English-language reader to works that were much discussed in their own time, and she situates Jewish and non-Jewish writers together in the context they shared.

For nineteenth-century writers and readers, successful fictional characters were "types," literary creations that both mirrored and influenced the trajectories of real lives. Stories about Jewish assimilators and converts often juxtaposed two contrasting types: the sincere reformer or true convert who has experienced a complete transformation, and the secret recidivist or false convert whose real loyalties will never change. As Safran shows, writers borrowed these types from many sources, including the novel of education produced by the Jewish enlightenment movement (the Haskalah), the political rhetoric of "Positivist" Polish nationalism, the Bible, Shakespeare, and Slavic folk beliefs.

Rewriting the Jew casts new light on the concept of type itself and on the question of whether literature can transfigure readers. The classic story of Jewish assimilation describes readers who redesign themselves after the model of fictional characters in secular texts. The writers studied here, though, examine attempts at Jewish self-transformation while wondering about the reformability of personality. In looking at their works, Safran relates the modern Eastern European Jewish experience to a fundamental question of aesthetics: Can art change us?

Gabriella Safran is Assistant Professor of Slavic Languages and Literatures at Stanford University.

"Intelligently and creatively, Safran compares closely the work of the Jewish author, Grigory Bogrov; the Polish author, Eliza Orzeszkowa; and the Russian writers Nikolai Leskov and Anton Chekhov with characterizations of Jews found in Russian letters throughout the whole of the century. In doing so, she demonstrates a familiarity and comfort with both critical themes of pre-Soviet Russian literature and literary criticism and with the broader context of Jewish life in the empire. Accordingly, her work is of genuine interest to students of Russian literature as well as for those committed to the investigation of both Jewish and Russian cultural history in the Tsarist empire."

"Writ[ten] in a clear, engaging and distinctive style. . . . [Safran] shares her insights on many important aspects of Jewish identity, issues of national identity, acculturation, assimilation, conversion, and anti-Semitism, among others, while she studies her four writers and their literary milieu. For academic libraries."

"[Safran's] work makes a serious contribution to our understanding of the complex nexus of Jew and Gentile in late Imperial Russia . . . .[It] should be read by anyone interested in the 'Jewish question,' national identities, and literature in the late Russian Empire. "