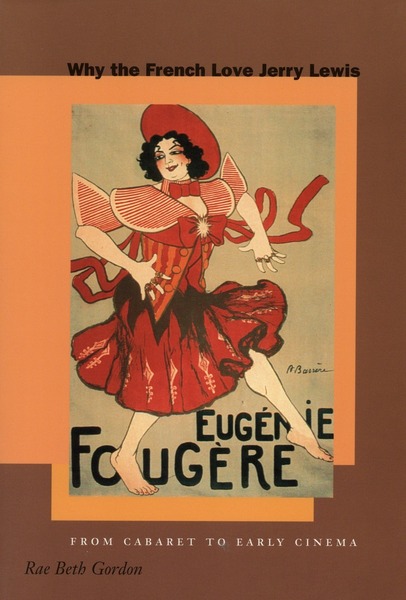 Vividly bringing to light the tradition of physical comedy in the French cabaret, café-concert, and early French film comedy, this book answers the perplexing question, “Why do the French love Jerry Lewis?” The extraordinary emphasis on nervous pathology in the Parisian café-concert, where the genres of the Epileptic Singer and the Idiot Comic took center stage, and where popular comic monologues and songs included “Man with a Tic” and “I’m Neurasthenic,” points to a fascinating intersection between medicine and popular culture. The French tradition of comic performance style between 1870 and 1910 nearly exactly duplicates the movements, gestures, tics, grimaces, and speech anomalies found in nineteenth-century hysteria; the characteristics of hysteria became a new aesthetics.

Early French film comedy carried on this tradition of frenetic gesture and gait, as most film performers came from these entertainments and from the circus. Even before Chaplin’s films triumphed in France, film comics were instantly recognizable from their pathological gait, just as Jacques Tati would be a half-century later. Comedy, a genre that dominated French cinema until World War I, has often been linked to a mass public for film; the author elucidates this link by proposing a broadly generalized cultural-medical phenomenon as the explanation for the dominance of the comic genre. Comic performance style drew from a group of nervous disorders characterized by the psychological automatism emanating from the “lower faculties”: nervous reflex, motor impulses, sensation, and instinct.

Building on her previous work on hysteria, the cabaret, and pathologies of movement in the films of Georges Méliès, and drawing on over 400 French films made between 1896 and 1915, the author contributes to a new theory of spectatorship at work in the cabaret, in shows of magnetizers, and in early French film comedy. Jerry Lewis touches a nerve in French cultural memory because, more than any other film comic, he incarnates this tradition of performance style.

Rae Beth Gordon is Professor of French and Comparative Literature at the University of Connecticut and the author of Ornament, Fantasy, and Desire in Nineteenth-Century French Literature.

"Why the French Love Jerry Lewis invites readers to consider the power of performance and cinematic illusion to tickle the funny-bone and agitate the senses, to produce involuntary laughter and shivers of delight."