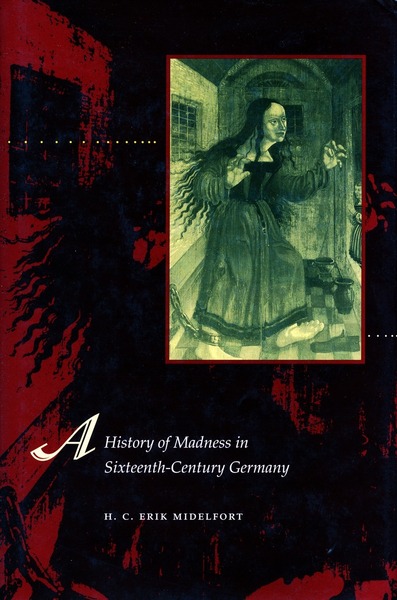 Winner of the 2000 Roland Bainton Award in History, sponsored by the Sixteenth-Century Studies Association.

This magisterial work explores how Renaissance Germans understood and experienced madness. It focuses on the insanity of the world in general but also on specific disorders; examines the thinking on madness of theologians, jurists, and physicians; and analyzes the vernacular ideas that propelled sufferers to seek help in pilgrimage or newly founded hospitals for the helplessly disordered. In the process, the author uses the history of madness as a lens to illuminate the history of the Renaissance, the Reformation and Counter-Reformation, the history of poverty and social welfare, and the history of princely courts, state building, and the civilizing process.

Rather than try to fit historical experience into modern psychiatric categories, this book reconstructs the images and metaphors through which Renaissance Germans themselves understood and experienced mental illness and deviance, ranging from such bizarre conditions as St. Vitus’s dance and demonic possession to such medical crises as melancholy and mania. By examining the records of shrines and hospitals, where the mad went for relief, we hear the voices of the mad themselves.

For many religious Germans, sin was a form of madness and the sinful world was thoroughly insane. This book compares the thought of Martin Luther and the medical-religious reformer Paracelsus, who both believed that madness was a basic category of human experience. For them and others, the sixteenth century was an age of increasing demonic presence; the demon-possessed seemed to be everywhere. For Renaissance physicians, however, the problem was finding the correct ancient Greek concepts to describe mental illness. In medical terms, the late sixteenth century was the age of melancholy. For jurists, the customary insanity defense did not clarify whether melancholy persons were responsible for their actions, and they frequently solicited the advice of physicians.

Sixteenth-century Germany was also an age of folly, with fools filling a major role in German art and literature and present at every prince and princeling’s court. The author analyzes what Renaissance Germans meant by folly and examines the lives and social contexts of several court fools.

H. C. Erik Midelfort is C. Julian Bishko Professor of History at the University of Virginia.

"Middlefort's latest book will not disappoint the many scholars in varied disciplines who have eagerly awaited it. This is mature, sensitive scholarship . . . [that] succeeds brilliantly in exploring the social and intellectual dilemmas posed by early modern insanity. . . It belongs in every academic library."

"This is the best book I have ever read on the border between cultural and social history in early modern Europe."

"The best book yet on madness in history. Erik Midelfort's study of madness in sixteenth-century Germany is an outstanding contribution to the medical, social and cultural history of the insane. Its impressively researched discussions of madness, melancholy, demonic possession, witchcraft, folly and the asylum give a more convincing and reliable picture of these subjects than we have ever had, for any European nation. Although aimed at a scholarly audience, the book is so well-written and so full of fascinating topics and colorful tales that it should appeal to general readers as well as to professional historians."

"In this long awaited book, Midelfort explores how sixteenth-century Germans understood madness and mental disorders during the age of the Renaissance and the religious reformations. Operating from the assumption that one cannot understand madness without understanding the social contexts in which it is defined, diagnosed, and treated, the author examines madness in seven chapters, each a model of th integration of intellectual and social history. . . . This important work should be in every university library."