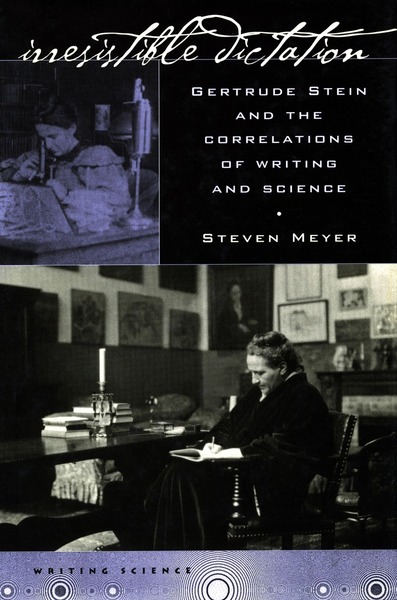 Before Gertrude Stein became the twentieth century's preeminent experimental writer, she spent a decade conducting research in both the leading psychological laboratory and the leading medical school in the United States. This book unearths the turn-of-the-century scientific and philosophical worlds in which the young Stein was immersed, demonstrating how her extensive scientific training continued to exert a profound influence on the development of her extraordinary literary practices.

As an undergraduate, Stein worked with the philosopher William James and the psychologist Hugo Münsterberg at the Harvard Psychological Laboratory, investigating secondary personalities and automatic writing. Later, at Johns Hopkins Medical School, she was involved in cutting-edge neuroanatomical research in the laboratory of Franklin Mall, the leading anatomist and embryologist of the day, and his assistant Lewellys Barker, the author of the first English-language textbook to describe the nervous system from the standpoint of the newly established neuron doctrine. Just as scientists reconceived relations among neurons as a function of contact or contiguity, rather than of organic connection, Stein radically reconceptualized language to place equal weight on the conjunctive and disjunctive relations among words.

In the course of a broad reevaluation of Stein's career, the author situates this major postromantic thinker in the lineage of poet-scientists such as Wordsworth, Goethe, and Shelley, as well as in an important line of speculative thinkers that extends from Emerson to William James, Alfred North Whitehead, and Ludwig Wittgenstein, and emerges today in figures as disparate as the bioaesthetician Suzanne Langer, the technoscience theorist Donna Haraway, and the neuroscientists Francisco Varela, Gerald Edelman, and J. Allan Hobson. These two lines share the perspective that William James designated radical empiricism.

A groundbreaking interdisciplinary study, Irresistible Dictation aims both to explicate Stein's radically experimental compositions and to bring the radical empiricist philosophical tradition into focus through the lens of her writing.

Steven Meyer is Associate Professor of English at Washington University in St. Louis.

"Irresistible Dictation is dazzling, original, and wonderful. A major work about Gertrude Stein and her radical creativity, it also brings together literature and science in compelling ways. Steven Meyer writes with lucidity, freshness, and authority, and I am very glad he has written this book."

—Catharine R. Stimpson, Dean of the Graduate School of Arts and Science, New York University, and editor of Gertrude Stein: Writings, 1903-1932 and Writings, 1932-1946

"What has been missing from the vast body of Gertrude Stein studies is an approach so holistic that it sheds light not only on the literary tradition of which she was a part, but the early neurological and philosophical background that contributed so much to her thought. Along comes Steven Meyer, who has somehow mastered the science and the philosophy so throughly that he presents us with exciting, dramatically new, and beautifully lucid concepts that are sure to fascinate scholars for decades to come."

—Sherwin B. Nuland, M.D., Clinical Professor, Yale Medical School, and author of How We Die, How We Live, The Mysteries Within, and Leonardo Da Vinci

"Irresistible Dictation is a fascinating new view of science, literature, and the art of writing. I suspect that Steven Meyer has outdone his protagonist, Gertrude Stein, in the subtlety of his philosphical and literary analyses and in his penetrating insights into the limits of the contemporary neurosciences. A marvelous tour de force."

—Israel Rosenfield, author of The Invention of Memory: A New Theory of the Brain, The Strange, Familiar, and Forgotten: An Anatomy of Consciousness, and Freud's "Megalomania"

"This groundbreaking work enters areas of Gertrude Stein research that once were considered marginal, but now must be considered central. Steven Meyer brings Stein back to science, reclaims her for good sense, and widens our understanding of her no longer peculiar originality."

—William H. Gass, author of The World Within the Word, Habitations of the World, Finding a Form, The Tunnel, and Cartesian Sonata and Other Novellas

"[Meyer's] discussions of [Stein's] writing are consistently superb. In his hands, 'Bee Time Vine' charms us all over again and 'Mrs. Emerson' yields new linguistic possibilities . . . .Meyer expertly shows how Stein attends to every aspect of writing: space, spelling, negation, sonority, sequence, psychology, intonation, rhythm, punctuation . . . .Well-written, cogent, and enlightening, Irresistible Dictation opens up areas of investigation long overdue in Stein scholarship while it returns us to the irresistible pleasures of Gertrude Stein, who confronted fate and rose—rises—to the occassion."