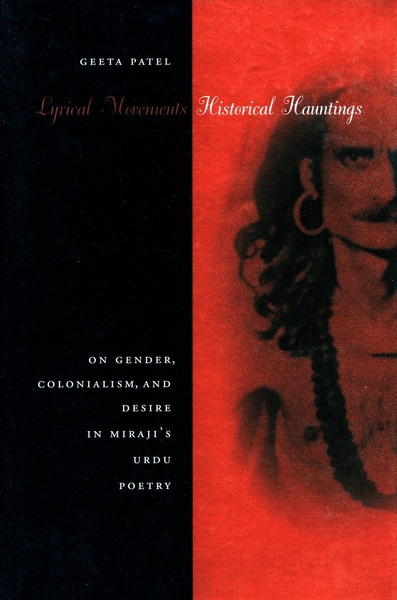 This is one of the first books in any language on the life and work of Miraji (1912-49), a member of the triumvirate of canonical Urdu poets of the twentieth century. Lyrical Movements, Historical Hauntings aims to unravel the paradox of an acclaimed modernist writer whose poems are widely regarded as impossibly difficult to comprehend. It also grapples with the vexed issue of how to speak of a Muslim male poet who wrote under a Hindu woman's name, and whom contemporary critics described as mad, sexually perverse, and a voyeur.

Miraji's short life spanned the final period of British colonialism in South Asia, and his work played a part in the nationalist struggle. This book locates Miraji's writings in the colonial milieu of his time by linking them to the literary and theoretical concerns of a prior generation of writers. By contextualizing Miraji's life and lyrics within a literary history of modernist poetry, it suggests new ways of conceiving modernizing nationalisms and their relationship to gender and sexuality. In a manner consistent with Miraji's own poetics, the author traces the logic of nationalist discourses in order to identify multiple intersections and possibilities foreclosed in the process of state formation in India and Pakistan.

Lyrical Movements, Historical Hauntings does more than delineate the construction of a modern Urdu literary canon from the 1920s to the 1940s. It teases out the threads that wove Urdu modernism into the global Marxist and progressive literary movements of the time; it resituates Miraji as an anticolonial, nationalist writer; it examines the way critics have played Miraji's life off his work and provides an alternative biography; and it presents close readings of some of his most compelling and challenging poems. In the process, the author reconceives the relationships among nationalism, gender, and sexuality. Appendixes offer a rich sampling of new translations of Miraji's poems, essays, and other prose works.

“Patel’s archival sensitivity is impressive: the details of Miraji’s everyday life make the story live in ways that few literary histories have done. This book provides a model to which contemporary students of literary and cultural studies should aspire.”—Lauren Berlant, University of Chicago

“This book will be of tremendous interest not only to specialists in Urdu literature, but also to those interested in colonial and post-colonial literature generally. Patel weaves biographical information into insightful and stimulating textual criticism, and her achievement as a translator of Miraji’s highly elusive verse deserves special recognition.”—Carla Petievich, Montclair State University