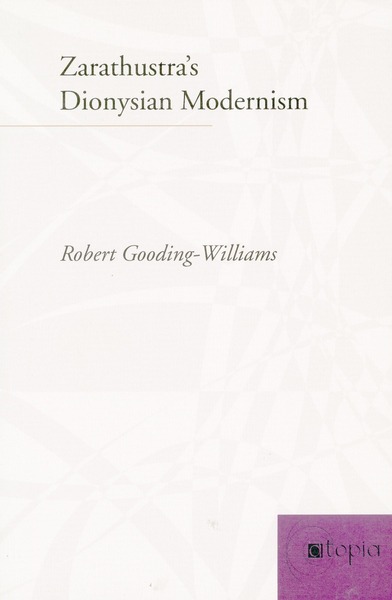 Nietzsche takes up the problem of modernism by inventing Zarathustra, a self-styled cultural innovator who aspires to subvert the culture of modernity (the repressive culture of the "last man") by creating new values. By showing how Zarathustra can become a creator of new values, notwithstanding the forces that hinder his will to innovate, Nietzsche answers the skeptic who proclaims that new-values creation is impossible. Zarathustra is a story of repeated clashes between Zarathustra's avant-garde, modernist intentions and figures of doubt who condemn those intentions.

Through a close reading of Zarathustra, the author reconstructs Nietzsche's explanation of the possibility of modernism. Showing how parody, irony, and plot organization frame that explanation, he also demonstrates the central significance of Zarathustra's speeches on the body and the will to power. The author argues that Nietzsche's critique of the modern philosophy of the subject revises Kant's concept of the dynamical sublime and makes allegorical use of the myth of Theseus, Ariadne, and Dionysus. He also proposes an original interpretation of the thought of eternal recurrence (according to Nietzsche, the "fundamental conception" of Zarathustra). Breaking with conventional Nietzsche scholarship, the author conceptualizes the thought not as a theoretical or a practical doctrine that Nietzsche endorses, but as a developing drama that Zarathustra performs.

Robert Gooding-Williams is Professor of Philosophy and Jean Gimbel Lane Professor of the Humanities at Northwestern University. He is the editor of Reading Rodney King, Reading Urban Uprising.

"This is an original and exciting interpretation of Nietzsche's most difficult, hermetic, and influential book. The interpretation is carefully articulated, moreover, in such a way that it situates Thus Spoke Zarathustra at the center of Nietzsche's life and career. The reader thus gains not only a wealth of unprecedented insights into the structure and flow of Zarathustra, but also comes to appreciate it within the context of Nietzsche's greatest philosophical challenge—his confrontation with modernity, in which he attempts to take the measure of all things modern."

"Robert Gooding-Williams's book is a dazzling achievement....elegant, erudite, and imaginative..."