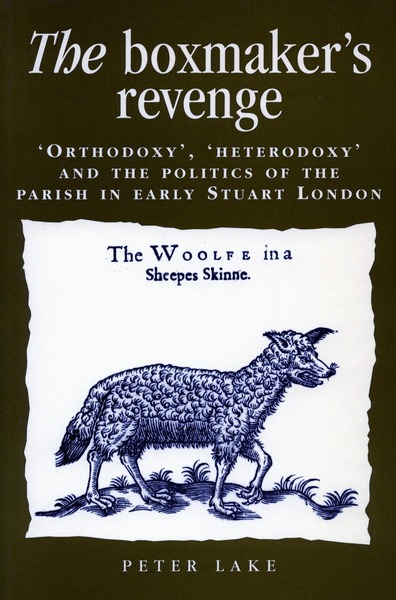 The Boxmaker’s Revenge
‘Orthodoxy,’ ‘Heterodoxy,’ and the Politics of the Parish in Early Stuart London
Peter Lake

By narrating a protracted and frequently bizarre altercation between a London minister and a member of his flock, this book provides a vivid picture of puritanism at the parish level in early Stuart England.

On February 11, 1627, Stephen Denison preached a sermon that violently denounced an erstwhile boxmaker, John Etherington, as a heretic, a sect master, and an Anabaptist. The accused stood before Denison and then was returned to prison, where he languished for another three years. Denison published his denunciation later that year under the title The White Wolf. By the 1630s, however, Denison himself was in trouble with the same Court of High Commission that had sentenced Etherington. Denison was deprived of his living after being denounced by parishioners who resented his irascible temper, his harsh pulpit style, and his belittling of their church activities. Then, in 1641, Etherington came back to haunt Denison when, taking advantage of the collapse of censorship, the boxmaker heatedly replied in print to the accusations made against him fourteen years before.

The book places this dispute in the multiple social, cultural, and political contexts necessary to understand it. What forces and what ideological and personal trajectories brought these two men into conflict? What issues did the dispute raise and what do they tell us about the religious history of early Stuart England? The story of Denison and Etherington provides an example, almost unique before 1640, of the interaction between a minister and a parishioner. We also gain a portrait of an arena of lay activities and at least potentially heterodox doctrinal debate in puritan circles.

The author challenges the bad name that polemic has acquired of late among scholars by using overtly polemical sources, arguing that polemical intensity allows us a privileged glimpse into a world we do not usually get to see. He reads his sources against the grain, collating and comparing them to overcome the biases, silences, and exaggerations that the polemical mode also produces. In the end, the polemical constructions through which the story of Denison and Etherington has come down to us become necessarily a part of the story itself.

Peter Lake is Professor of History at Princeton University. Among his works is Culture and Politics in Early Stuart England (co-editor, Stanford, 1993).

"This substantive investigation of parochial politics is not merely the story of a private vendetta, but rather a dynamic narrative about popular opinion in flux. . . . The Boxmaker's Revenge deserves a wide readership among serious scholars."

"...an investigative triumph, combining an extremely sophisticated analysis of rich textual material with a meticulous reconstruction of the local London context."

"...intelligent...sophisticated...This is one of the most important works on early modern English religion to have appeared for many years."