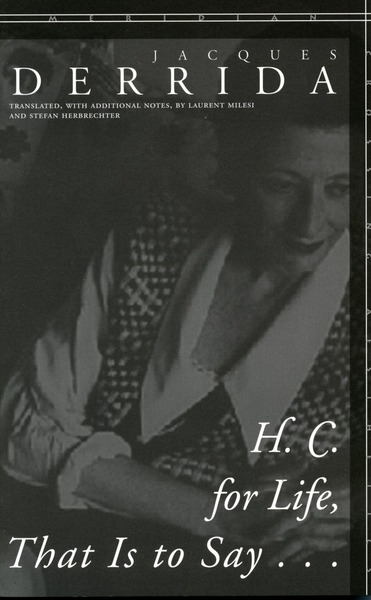 H. C. for Life, That Is to Say . . . is Derrida's literary critical recollection of his lifelong friendship with Hélène Cixous. The main figure that informs Derrida's reading here is that of "taking sides." While Hélène Cixous in her life and work takes the side of life, "for life," Derrida admits always feeling drawn to the side of death. Rather than being an obvious choice, taking the side of life is an act of faith, by wagering one's life on life.

H. C. for Life sets up and explores this interminable "argument" between Derrida and Cixous as to what death has in store deep within life itself, before the end. In addition to being a memoir, it is also a theoretical confrontation—for example about the meaning of "might" and "omnipotence," and a philosophical and philological analysis of the crypts within the vast oeuvre of Hélène Cixous. Finally, the book is Derrida's tribute to the thought of the woman whom he regards as one of the great French poets, writers, and thinkers of our time.

Jacques Derrida (1930-2004) was Director of Studies at the Ecole des Hautes Etudes en Sciences Sociales and Professor of Humanities at the University of California, Irvine. Among the most recent of his many books to have been translated into English are Paper Machine (2005), On Touching—Jean-Luc Nancy (2005), Rogues (2005), Eyes of the University (2004), For What Tomorrow... with Elisabeth Roudinesco (2004), Counterpath with Catherine Malabou (2004), Negotiations (2002), Who's Afraid of Philosophy? (2002), and Without Alibi (2002). All of these have been published by Stanford University Press.

"H.C. for Life, That Is to Say represents a vigorous volley within the series produced by the mutual provocation society of Hélène Cixous and Jacques Derrida. The particular provocation here--even more moving now that Derrida has gone--is his insistence that they fall on one side or the other of the question of life and death. She is for life, whereas for him one always dies in the end. Veritably incited, however, by Cixous' work, Derrida cannot avoid writing for her, on her side; and he cannot avoid provoking, in the sense of writing on behalf of, or on the side of her voice, reading and citing at length, playing off the polyphonic effects of a poetics that he considers to be among 'the most powerful and the most engaged in thinking in the history of literature.'"

"Because Hélene Cixous (the H.C. of the title) has a genius for making language speak and because no one knew better than Derrida how to mine the secret's of Cixous's profoundly complex and beguiling prose, this volume stands out as exceptional."

"H.C. for Life is, to be sure, a more than worthy homage to Cixous, all 173 pages of it, an homage that will incite the reader to read and reread the entirety of Cixous' difficult though fascinating and unique corpus. In this work, Derrida pays homage to the rich and powerful work of Hélene Cixous by rethinking the very concept of life in relationship to power, death, literature, and so on."