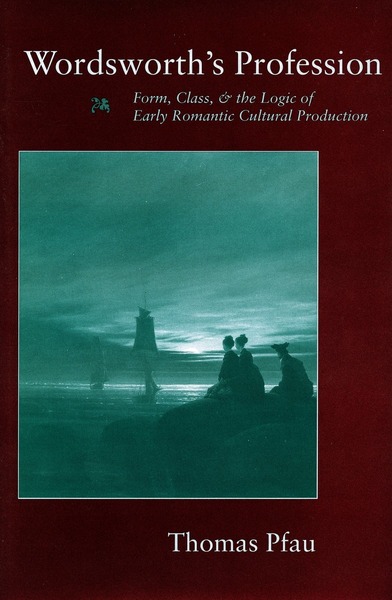 This book explores Wordsworth's professionalization as a writer in relation to the cultural and economic ascendancy of the English middle class between 1740 and 1820. Its wide-ranging interpretations are coordinated by a single, albeit highly ramified, critical hypothesis: that Romanticism's aesthetic forms simultaneously afforded the middle classes an imaginary furlough from the impinging consciousness of their tenuous socio-economic status.

Wordsworth's Profession analyzes and correlates changing paradigms of authorship, poetic genre, and tone with the demographic and spiritual aspects of middle-class life during the late eighteenth and early nineteenth centuries. The first of three parts explores Wordsworth's early descriptive poetry (An Evening Walk, Descriptive Sketches, and "Tinturn Abbey") in relation to inherited and contiguous aesthetic forms and practices, such as the landscapes of Lorrain and Gainsborough, Kant's theory of aesthetic communities, and the institutions of domestic tourism and the Picturesque in late-eighteenth-century England.

The second part addresses the construction of a distinctly middle-class paradigm of reading in Lyrical Ballads. It does so in relation to contemporary didactic fiction (Wollstonecraft), anti-didactic writing (Blake), speculative theories of education (Godwin, Coleridge, and Hegel), and the emergent so-called mutual tutor or "monitorial" systems of elementary schooling (Andrew Bell and Joseph Lancaster).

The book's final part, on The Prelude, focuses on representations of middle-class moral and economic anxiety as mediated in the spirited debate about populousness and public morality. Seen in this context, Wordsworth's autobiography appears less a confession than an attempt to simulate poetic answers to questions lingering in the national unconscious, questions too vast and threatening to bear conscious asking.