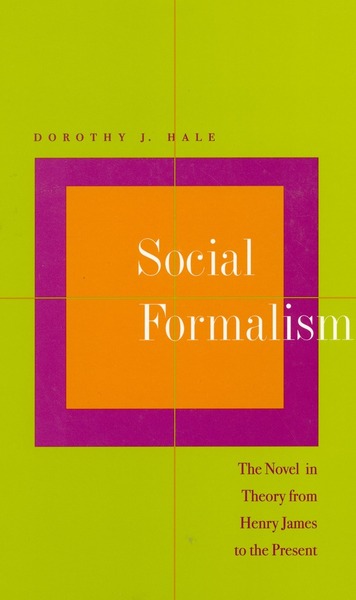 Social Formalism
The Novel in Theory from Henry James to the Present
Dorothy J. Hale

Winner of the 1998 Barbara and George Perkins Prize for the best book on narrative in 1998, sponsored by the Society for the Study of Narrative Literature.

In recent decades, literary critics have praised novel theory for abandoning its formalist roots and defining the novel as a vehicle of social discourse. The old school of novel theory has long been associated with Henry James; the new school allies itself with the Russian theorist Mikhail Bakhtin. In this book, the author argues that actually it was the compatibility of Bakhtin with James that prompted Anglo-American theorists to embrace Bakhtin with such enthusiasm. Far from rejecting James, in other words, recent novel theorists have only refined James's foundational recharacterization of the novel as the genre that does not simply represent identity through its content but actually instantiates it through its form.

Social Formalism demonstrates the persistence of James's theoretical assumptions from his writings and those of his disciple Percy Lubbock through the critique of Jamesian theory by Roland Barthes, Wayne Booth, and Gérard Genette to the current Anglo-American assimilation of Bakhtin. It also traces the expansion of James's influence, as mediated by Bakhtin, into cultural and literary theory. Jamesian social formalism is shown to help determine the widely influential theories of minority identity expounded by such important cultural critics as Barbara Johnson and Henry Louis Gates. Social Formalism thus explains why a tradition that began by defining novelistic value as the formal instantiation of identity ends by defining minority political empowerment as aestheticized self-representation.

“This book stages a powerful critique of the theory of narrative in general, and of the novel in particular. Hale’s arguments are convincing, she writes with an admirable lucidity, and she is fearless in taking on the central shibboleths of the last thirty years. This is a splendid, brave, bracing performance.”—Jonathan Freedman, University of Michigan