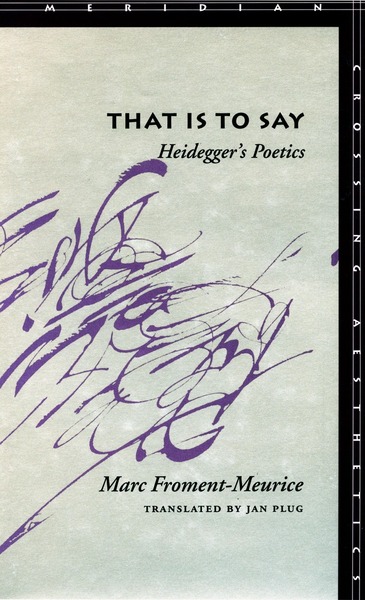 This is the first authoritative, book-length study of what Heidegger called "thinking poetics." That Is to Say conducts its analysis of Heideggerian poetics by expounding the sense of language from the perspective of fundamental ontology. This project is carried out in readings of the pertinent chapters of Being and Time, the lectures on Hölderlin, "The Origin of the Work of Art," and On the Way to Language. The book is guided by a question that no other writer on Heidegger has yet asked: Why should poiesis provide a privileged access to the specificity of the poetic?

With this question guiding his quite unorthodox analyses of Heidegger's texts on poetics and the work of art, the author sheds new light on every aspect of Heidegger's philosophy. The analyses devoted to Heidegger's idea of a proximity between thinking and poetry, his conception of Hölderlin as the poet, of poetic experience, and of the privilege he accords the name reveal a series of presuppositions and necessary assumptions in Heidegger's conception of poetry that not only remain unthought by Heidegger himself, but that, strictly speaking, cannot be thought in terms of what Heidegger understood by thinking.

That Is to Say points to the limits of poetics with regard to the work of art, and in particular the literary work. In doing so, it gestures toward new ways of doing justice to the literary and to art in general.