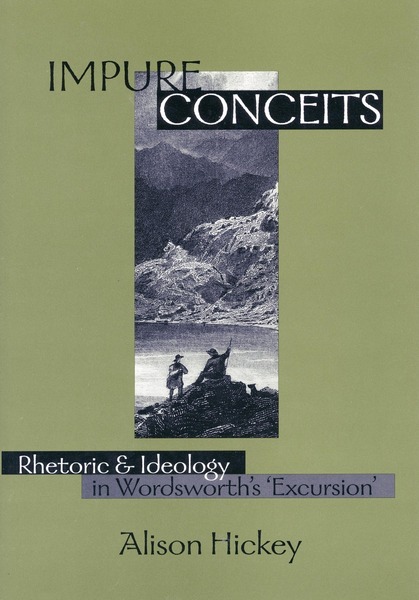 This book redefines the place of the Wordsworthian imagination in a cultural moment often classified as the transition from "Romantic" to "Victorian." Taking The Excursion and a constellation of related texts as a framework, the book suggests that the staggering critical neglect of Wordsworth's major project is correlated with the persistent inability of literary historians to chart that transition. To understand this elusive phase of literary and cultural history, the author proposes, we need to understand Wordsworth's role in it.

The book reevaluates the significance of The Excursion, both in Wordsworth's corpus and in the contexts of the French Revolution and the post-Napoleonic industrial/imperial order leading up to the Reform Bill of 1832. Through a series of theoretically informed readings of The Excursion alongside other Wordsworthian texts, the author reveals Wordsworth's ongoing vital engagement with questions of imagination and ideology, questions that persist, in ever-shifting forms, through the continuities and discontinuities of historical "context."

Foregrounding problems of rhetorical interpretation as The Excursion's central concern, this study focuses on the implications of these problems for the text's promotion of a social vision. It examines various figural systems—family narratives, property, education, and imperialism—and shows how diverse critical strategies of assimilating poetic text to doctrine meet with a resistant "blankness" at the heart of the figural production of meaning in the poem. This blankness is suggestive of the gap between Wordsworth's poetry and its simple appropriation by cultural or political analysis. Paradoxically it also suggests that an understanding of the dynamics of poetic figuration is crucially relevant to any study of Wordsworth's social and political theory.

"Hickey shows us what we have all been missing by accepting uncritically the dismissal of The Excursion. . . . She throws doors open in many directions. The writing is a model of how to conduct highly sophisticated argument in lucid prose."

"Impure Conceits is an important book, persuasive in many of its central claims, and one of the best answers yet to Jeffrey's complacent declaration that The Excursion places Wordsworth 'beyond the power of criticism.'"

"This book makes a convincing argument about a crucial, neglected poem. . . . [Impure Conceits] is an undoubted achievement."

"This is an important and thought-provoking study."