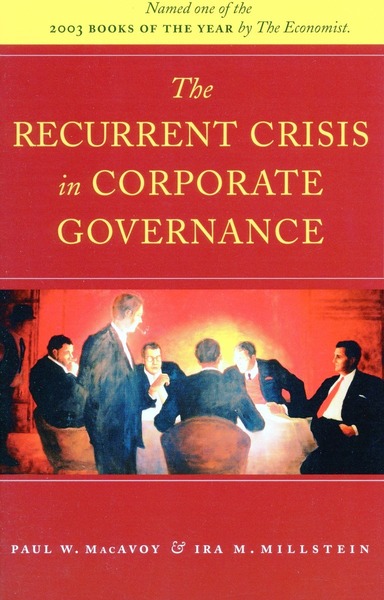 Named one of the 2003 books of the year in the Economist: "A convincing explanation of why, despite all of the recent reforms in American corporate governance, there will probably be more firms that go the way of Enron."

In the last thirty years, there has been a gradual erosion in the abilities and responsibilities of corporate boards. In addition to the ethics scandals that have plagued companies both new and established over the last three years, a number of over-diversified, over-staffed companies experienced failures that might have been avoided had there been proper oversight on the part of the board. While reform of the governance system has received considerable attention from the press, business leaders, and politicians, there have been few analyses of what is really happening on a systemic level, and even fewer workable suggestions for reform.

The Recurrent Crisis in Corporate Governance provides an expert assessment of what went wrong on corporate boards and how to fix them. The book begins with both a legal and economic examination of corporate governance during the last three decades, including the broad issue of boards taking on responsibilities without being able to fulfill their obligations because of the lack of access to information and people within the corporation. The authors then go on to show the correlation between strong board performance and strong company performance, make the case for separating the CEO and Chair positions, comment on the collapse of nine major corporations, including Global Crossing, K-Mart, Lucent, and Qwest, and provide suggestions on how boards can be more effective stewards of the shareholders' and public's trust.

Paul W. MacAvoy is a Thomas F. and William J. Gilbane President Fellow in the Department of Economics at Brown University. Professor MacAvoy served on

President Ford's Council of Economic Advisors and on the board of directors of several corporations including Lafarge, American Cyanamid, Alumax,

Combustion Engineering and the Chase Manhattan Bank Corporation. He is the author of twenty books and numerous journal articles focusing on government

regulation of the structure and conduct of the corporation. Ira M.

Harvard's Kennedy School of Government, and currently as a Visiting Professor at the Yale University School of Management. An Elected Fellow of

the American Academy of Arts & Sciences, he has counseled over 50 public and philanthropic boards, including General Motors, CalPERS, Tyco, and The Nature Conservancy, and has published numerous articles on corporate

Named by The Economist as one of six "best books" in economics and business for 2003.