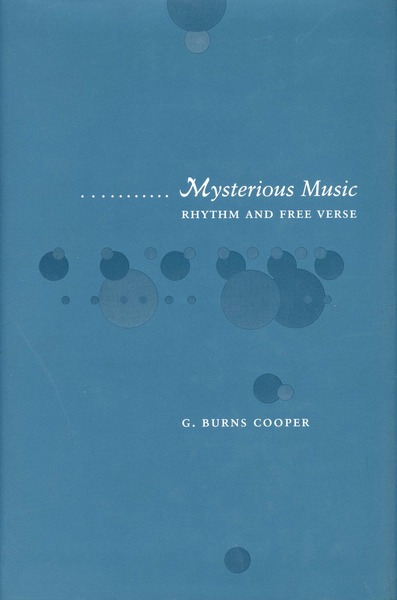 Though many recent poets insist on their poetry’s “musical” qualities, few offer linguistically satisfying explanations of that “music.” This book helps to fill that gap. It is a linguistically based study of rythmic structures, and of the nature of rhythm, in the free verse of T. S. Eliot, Robert Lowell, and James Wright. It was written for accessibility to readers who, although not necessarily specialists in linguistic poetics, have some knowledge of language and poetry.

The book begins with an examination of rhythm in language as a whole, and of rhythm as a basic mental structure. This discussion touches on concepts from metrical phonology, acoustic phonetics, Russian Formalist and New Critical ideas of rhythm and meter, and music theory. It then analyzes what the author (borrowing a phrase from Gerard Manley Hopkins) calls “rhythmic figures of sound,” syntax, line structure, and intonation in the poetry of Eliot, Lowell, and Wright.

Although the book focuses on these three writers, other poets are considered—notably Jimmy Santiago Baca, Denise Levertov, and Etheridge Knight—in order to illustrate the way different dialects use different intonation patterns for poetic effect. The book also contextualizes contemporary poems with brief comparisons to work from previous centuries.

The author argues that in discussions of rhythm and its structures, the old-fashioned way of analyzing types of “metrical feet” proves less than useful, and that the relatively new field of metrical phonology also has serious limitations. Instead, he advances a new approach based on “figures of sound” or “figures of rhythm,” both of which involve the repetition of some key linguistic component: a sound, a sequence of sounds, a method of forming words, a phrase structure, a line structure, or an intonational melody (literally, a tune—the movement of pitch through time).

In the simplest language possible, the author explains various linguistic concepts and terms as they occur. He has also provided a glossary of terms that may be unfamiliar to nonlinguists or that may carry different meanings in other disciplines.

G. Burns Cooper is Associate Professor of English at the University of Alaska, Fairbanks.