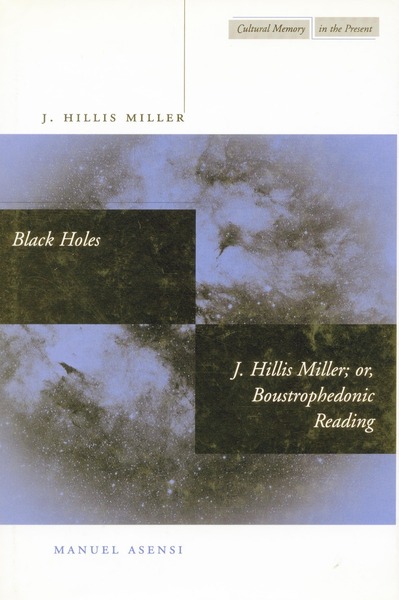 This innovative work sets two texts by two different authors on facing pages, designed so that they read in tandem—Miller's text on the right, Asensi's on the left. It makes a long trajectory, moving back and forth as an ox plows a field, boustrophedonically, to borrow the figure in Manuel Asensi's title.

Black Holes, by J. Hillis Miller, analyzes changes in the contemporary research university in the West. The mission of the research university has been profoundly influenced by the end of the Cold War and by globalization, advances in communication technologies, and shifts in funding from the federal government to transnational corporations. Miller aims to discover what the function of the humanities might be in this new kind of university. Echoing Bill Readings, he calls for a university of dissensus that would be made up of adjacent or overlapping communities, each fundamentally other to the others, each inhabited by its own otherness. Each of those opacities is a kind of black hole in the luminosity or enlightenment to which the university has traditionally been dedicated. Miller concludes with sections on Trollope and Proust that attempt to show how otherness is exemplified in the work of two fundamentally dissimilar authors.

Manuel Asensi's J. Hillis Miller: or, Boustrophedonic Reading is the first comprehensive interpretation of Miller's work, one that foregrounds its difference not only from the work of his associates—such as Paul de Man, Jacques Derrida, and Georges Poulet—but from European literary methodologies such as semiotics, Slavic formalism, Glosematics, narratology, structuralism, and reception theory. Bypassing or challenging conventional accounts of Miller's work, Asensi brings a fresh view to his readings of Miller's criticism. He finds there a complex and partially contradictory "matrix" that persists, throughout the apparent methodological changes, from Miller's earliest work to the most recent. According to Asensi, that matrix organizes itself around a fascination with the strangeness or otherness of literary works.