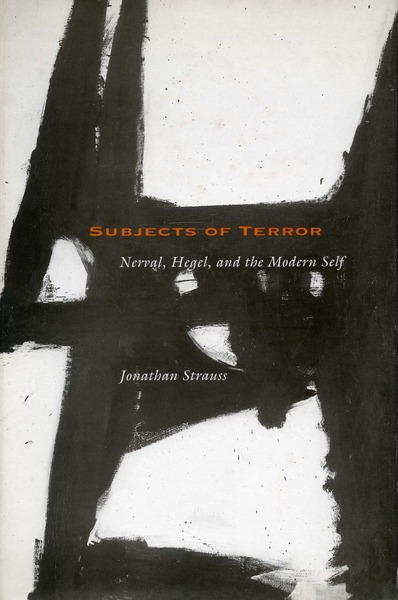 Subjects of Terror
Nerval, Hegel, and the Modern Self
Jonathan Strauss

Subjects of Terror uses a reading of the French Romantic poet Gérard de Nerval to elucidate and critique a death-based ideology of subjectivity that has remained in force from Kant to Lacan. This model, despite variations, is distinguished by three principal characteristics: that the subject is the self-sameness of individual experience, that as such it functions like language (or, more specifically, like writing), and that this self-sameness is the annihilation of all individual experiences.

Theorized by Hegel, Heidegger, Kojève, and Lacan, this abstract and ultimately impersonal notion of the self was not merely theoretical, however. It was, for example, long instantiated and enforced by the guillotine. Even in its more intimate and less spectacular forms, it provoked strong affective responses, as is evidenced by writers of the Romantic period, from Hugo to Mallarmé, Zola, and Nietzsche. As part of this affective reaction, Nerval's writings exemplify not only how this negative self-construction determines self-understanding but also how it determines self-experience, or, in other words, the way it feels to be a self in this cultural and historical context. That feeling is, fundamentally, terror, and the context is still in many ways our own.

The book demonstrates that Nerval's works constitute an aesthetic resistance to that ideology of terror and as such helped open the way for the ethical models of subjectivity that will appear in Kristeva, Aulagnier, and Levinas. Although for two centuries, social, theoretical, and aesthetic forces have coerced individuals into experiencing the world through the morbid filter of their own absolute destruction, the author argues through Nerval for the possibility of an alternate, open-ended model of experience based on the libidinization of language itself.

Jonathan Strauss is Assistant Professor of French at Miami University.

“This important book presents a remarkably thorough interpretation of Nerval’s work that does critical justice both to the intricacies of individual texts and to the evolution of his thinking and writing. . . . It is also a significant intervention in the difficult field of philosophy and literature.”—Thomas Trezise, Princeton University