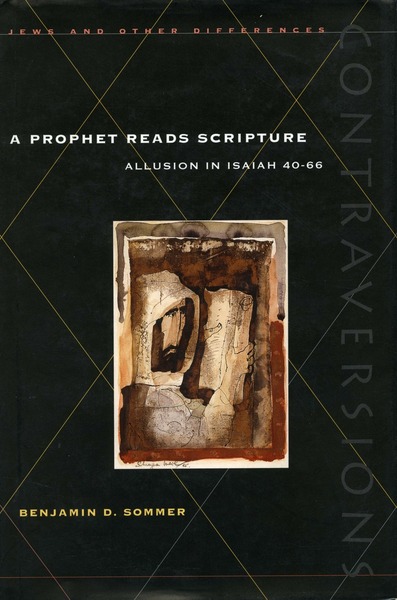 Winner of the 2000 Salo W. Baron Book Award, sponsored by The American Academy for Jewish Research.

This book examines the use of older biblical texts in Isaiah 40-66, notably the writings attributed to Deutero-Isaiah. Its discussion of allusions, influence, and intertextuality generates significant questions for both biblicists and literary critics: Why do authors allude? How does the presence of older material in a text affect readers? How can critics identify genuine cases of allusion? Are contemporary theories of intertextuality applicable to ancient texts? The author defends the controversial historical questions asked by scholars of inner-biblical exegesis, modifying some of the dominant (and, in some ways, misleading) categories other biblical scholars have created. In sum, the book aims to refine the study of inner-biblical exegesis through an extensive examination of the use of older texts in one corpus.

The redactional complexity of the Book of Isaiah has rendered it central to discussions of canon formation and the final shaping of biblical material. The author demonstrates that Deutero-Isaiah situated himself in a wide stream of tradition by no means limited to an Isaianic school, and that his most important literary precursor was not First Isaiah but Jeremiah. This finding necessitates a trenchant reappraisal of recent work on the unity of the Book of Isaiah. Further, the author shows that the strikingly consistent poetics of allusion running throughout all of Isaiah 40-66 testifies to the coherence of those chapters as a single corpus, arguing against multiple authorship.

Close readings of the use of borrowed material in Isaiah 40-66 sharpen our appreciation of Deutero-Isaiah’s originality and artistry, highlighting his attempts to convince Judean exiles that God had neither abandoned nor failed them. The prophet’s heavy dependence on earlier prophets illuminates the changes classical Israelite prophecy underwent in the Babylonian exile. These changes led to the disappearance of prophecy and the rise of exegetical forms of religious expression known from Qumran, early Christianity, and rabbinic Judaism.

"This book is a very careful and well-written consideration of how Second Isaiah uses scripture. It demonstrates a deep knowledge of literature and literary theory that is not often paralleled in the field of biblical studies, and it goes beyond earlier pathbreaking work on 'inner-biblical exegesis.' Especially provocative is Sommer's argument that the prophesies of Isa. 1—39 evidently did not bear any primacy of authority for Second Isaiah. The thesis is closely argued and will certainly attract much attention and further discussion."

“This very impressive work is an original and deeply instructive contribution to biblical studies. Sommer is a finely perceptive reader of biblical texts, has a real mastery of the immense body of biblical scholarship, and moves with remarkable assurance from literary to historical analysis. The book not only enables us to read the prophet Deutero-Isaiah in a new and illuminating way but also leads us to understand the development of later biblical history in a new way.”—Robert Alter, University of California, Berkeley

“Sommer has written a very detailed and precise account, arguing that the prophetic figure Deutero-Isaiah knew and used, by allusion and by various modes of reinterpretation, the very words of certain other biblical texts. He defines the different forms of allusion very exactly, and his study, interestingly, does not seek to overturn, but actually supports, familiar source-critical approaches. With present interests in canon and intertextuality, this is a work of first-rate importance.”—James Barr, Oxford University