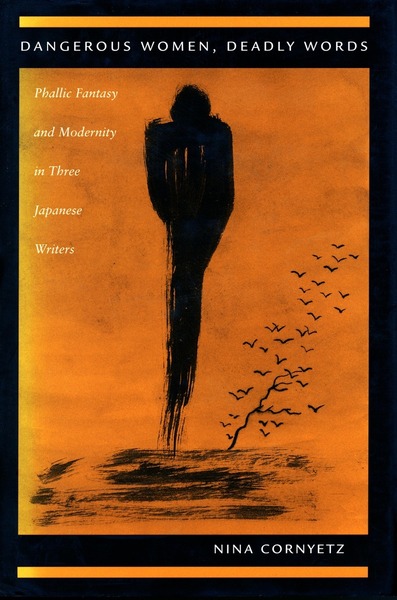 Dangerous Women, Deadly Words is a materialist-feminist, psychoanalytic analysis of a modern Japanese literary trope—the dangerous woman—in the works of three twentieth-century writers: Izumi Kyoka (1873-1939), Enchi Fumiko (1905-86), and Nakagami Kenji (1946-92). Linked to archaisms and magical realms, the trope of the dangerous, spiritually empowered woman culls from and commingles archetypes from throughout the Japanese canon, including mountain witches, female shamans, and snake-women.

In radical opposition to the conventional interpretation of the trope as a repository for transhistorical notions of "female essence" and "Japaneseness," the author reads the dangerous woman as connected in complex ways with twentieth-century Japanese epistemological upheavals: the negotiation of modern phallic subjectivity, modernization of a homosocial economy, the radically changed status of women, reified maternity, compulsory heterosexuality, and the function of literature.

Nina Cornyetz is Assistant Professor of Japanese at Rutgers University.

"Rigorous use of psychoanalytic and feminist theories, coupled with close textual analyses, make Nina Cornyetz's exploration of a literary trope of the "dangerous woman" a stimulating study. . . . Cornyetz's book marks a significant contribution, not only to the field of Japanese literary studies, but also to the psychoanalytic and feminist theories as well."