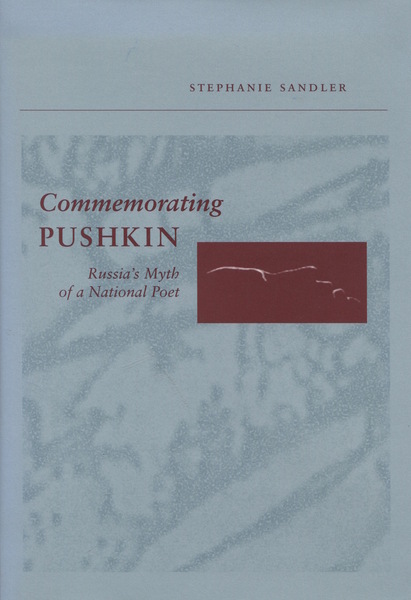 Commemorating Pushkin argues that the emotional complexity of Russia's relationship with Pushkin has informed both large-scale cultural institutions and the writings of talented individuals. It assesses twentieth-century museums, anniversary rituals, and films that keep the poet alive. It shows how Pushkin's self-fashioning was exemplary for Anna Akhmatova, Marina Tsvetaeva, Andrei Bitov, and Andrei Sinyavsky. And it goes beyond well-known figures to give names and histories to poets, novelists, actors, filmmakers, scholars, and museum workers who have sustained Russia's myth of a national poet.

Stephanie Sandler is Professor of Slavic Languages and Literatures at Harvard University. She is the author of a number of books, including Distant Pleasures: Alexander Pushkin and the Writing of Exile (Stanford, 1989).

"Stephanie Sandler's long-awaited book, Commemorating Pushkin: Russia's Myth of a National Poet, offers us a thorough and erudite look at the Pushkin phenomenon in Russia....Her comments and discussions are at all times perceptive and immensely well-informed, and her readings are nuanced and imaginative."--Slavic and East European Journal

"This book will be of interest to a wide range of Russian cultural scholars, offering both a valuable introduction to the subject of Pushkin's legacy and also detailed insights in specific areas, particularly with regard to visual culture."