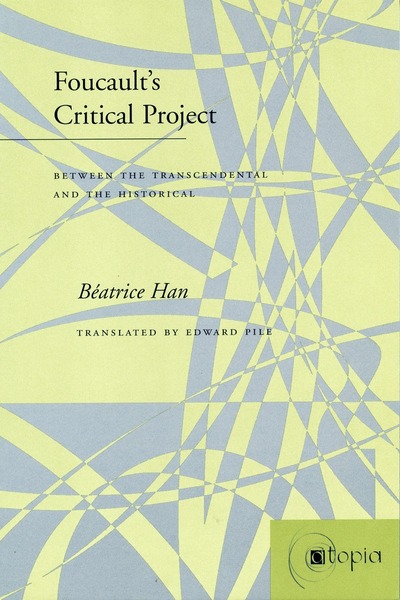 This book uncovers and explores the constant tension between the historical and the transcendental that lies at the heart of Michel Foucault's work. In the process, it also assesses the philosophical foundations of his thought by examining his theoretical borrowings from Kant, Nietzsche, and Heidegger, who each provided him with tools to critically rethink the status of the transcendental.

Given Foucault's constant focus on the (Kantian) question of the possibility for knowledge, the author argues that his philosophical itinerary can be understood as a series of attempts to historicize the transcendental. In so doing, he seeks to uncover a specific level that would identify these conditions without falling either into an excess of idealism (a de-historicized, subject-centered perspective exemplified for Foucault by Husserlian phenomenology) or of materialism (which would amount to interpreting these conditions as ideological and thus as the effect of economic determination by the infrastructure).

The author concludes that, although this problem does unify Foucault's work and gives it its specifically philosophical dimension, none of the concepts successively provided (such as the épistémè, the historical a priori, the regimes of truth, the games of truth, and problematizations) manages to name these conditions without falling into the pitfalls that Foucault originally denounced as characteristic of the "anthropological sleep"—various forms of confusion between the historical and the transcendental. Although Foucault's work provides us with a highly illuminating analysis of the major problems of post-Kantian philosophies, ultimately it remains aporetic in that it also fails to overcome them.

Béatrice Han is Lecturer in Philosophy at the University of Essex.

“This is a brilliant book that shows an admirable mastery of all the relevant texts—including the interviews—and proceeds to problematize Foucault’s work at its deepest level, i.e., its ontology of the order of the world and of the constitution of the subject.”—Hubert Dreyfus, University of California, Berkeley

“In this masterpiece of philosophical interpretation, Béatrice Han deciphers Foucault’s ‘unthought’ by means of an attentive confrontation of his work on Kant, Nietzsche, and Heidegger.”—Dominique Janicaud, University of Nice

“Han does a commendable job, then, of providing a sympathetic, yet critical, reading of Foucault’s philosophical projects. And in the end, this is the particular value and charm of her book: an analysis that never flinches from identifying shortcomings, vagueness, and contradictions in Foucault’s arguments, yet shows a reasoned appreciation for the ambitions, insights, and invaluable contributions of his work.”—Greg Eghigian, Penn State University