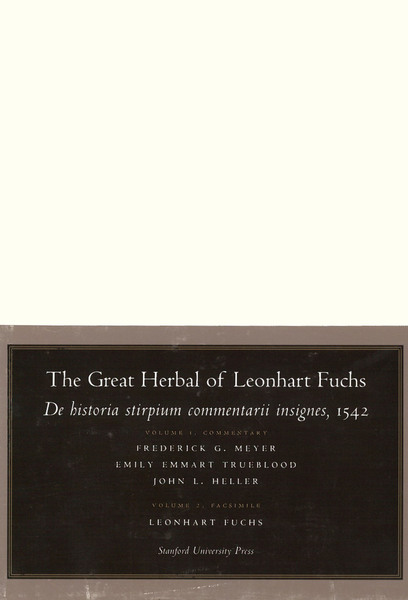 Leonhart Fuchs's herbal—recognized for more than four centuries as a masterpiece of Renaissance botany and one of the most beautiful books ever printed—now appears for the first time in a facsimile edition, accompanied by a volume of commentary based on three decades of historical and botanical research; the two volumes are published as a handsome boxed set. Only some 150 copies of the herbal are known to survive in rare book collections, and in the antiquarian book market it commands high prices (a copy was sold at Christie's for $17,000 in 1997).

The herbal, a compilation of information on the medicinal properties of plants, had declined in the Middle Ages. This changed in the early sixteenth century with the emergence in Germany of the new form of a printed, illustrated herbal, led by De historia stirpium commentarii insignes by Leonhart Fuchs (1501-1566). The plan and organization of the herbal was entirely original with Fuchs, although the work included a vast amount of material derived from his Classical predecessors.

Fuchs's book is of great splendor, without equal among sixteenth-century herbals. It is illustrated with 511 woodcut figures, all original and depicted from life. These figures established a standard of botanical illustration that has lasted to the present day, and more than 100 species were illustrated for the first time (including 12 New World plants such as maize, kidney bean, chili pepper, cactus, and tobacco). During Fuchs' lifetime, the herbal and its various abridgements went through 39 printings in Latin, German, French, Spanish, and Dutch. The original Latin edition of 1542 is here reprinted in a facsimile only slightly smaller than the original, as the second volume of this set.

The exhaustively detailed commentary will become the standard reference work for Renaissance botany. Of invaluable interest to historians of medicine, pharmacology, philology, art, and printing, it will also appeal to collectors of fine and rare books, gardeners, and proponents of alternative medicine. The commentary contains some 150 illustrations, 100 in color, that include contemporary hand-colored figures from printed copies of the herbal and woodcuts hand-colored under Fuchs' supervision for a projected, unpublished elaboration of the original herbal.

"A folio of breathtaking splendor."

—Herbals: Their Origin and Evolution

"Perhaps the most celebrated and beautiful herbal ever published."

—Printing and the Mind of Man

"Fuchs' woodcuts set a standard for botanical illustration that holds up to this day for clarity and directness."

"One of the greatest of all herbals."

"The commentary, a tribute from twentieth-century botanists to a famous sixteenth-century predecessor, will be consulted with profit and pleasure by botanists and by historians of botany, natural history, and late humanist scholarship. . . . The book is beautifully produced."

—Journal of the History of Biology