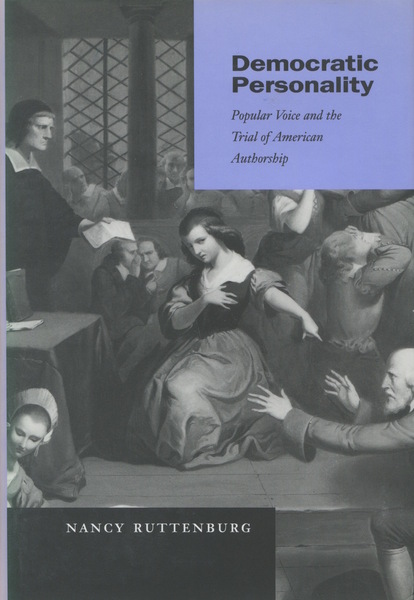 This book proposes a new view of the democratization of America by recasting democracy as a symbolic theater, historically realized in an untheorized and irrational public utterance that began with the Salem witchcraft crisis of 1692 and extended through the Great Awakening and the antebellum era. This discursive practice gave rise, as popular voice, to a distinctive mode of political and literary subjectivity, "democratic personality," which emerged without reference to the political-philosophical currents and attendant humanistic values that anticipated the formation of a liberal democratic society.

The author constructs a genealogy of democratic personality by examining the historical and, later, fictional theaters within which it emerged to redefine the relation of appearance to reality and thus challenge hierarchies of political and cultural power. Its history, as outlined in the first half of the book, traces how colonial culture forsook Puritan cosmology to embrace the complex cultural semiosis of a democratic society based on the representational potential of the individual. As a strategy for self-production that spurred an urgent inquiry into the ontological status of representation, democratic personality crucially influenced the rise of a national literature by complicating the ideological problem of establishing a "democratic" poetics.

The second half of the book examines the development—in the work of Brown, Crèvecoeur, Burroughs, Cooper, Emerson, and Whitman—of an American "aesthetic of innocence." As a platform for the production of a national literature that would claim a unique exemption from the deformations of fiction, the aesthetic of innocence evolved into the practice of a literary eugenics that intended to domesticate democratic personality by embracing its primitive energies as uniquely American while attempting to contain the subversive uncontainability of its voice. The book concludes with a reading of Billy Budd, Melville's novelistic rejection of liberal culture's attempt to domesticate democratic personality.

"This work is of the highest importance. The chapters on the Salem witch-hunt and the Great Awakening are filled with brilliant insights and constitute a significant new interpretation of popular religion in colonial America. The detailed treatments of Wieland, The Last of the Mohicans, and Billy Budd achieve something of a tour de force of literary criticism as Ruttenburg relates them to the problem of 'authorship' in Federal and antebellum America. In its originality and ambitious linkages, the study is sui generis."

"The study is a must for any American Studies scholar interested in the roots of American democracy not as an institution but as a popular and literary experience and representation."