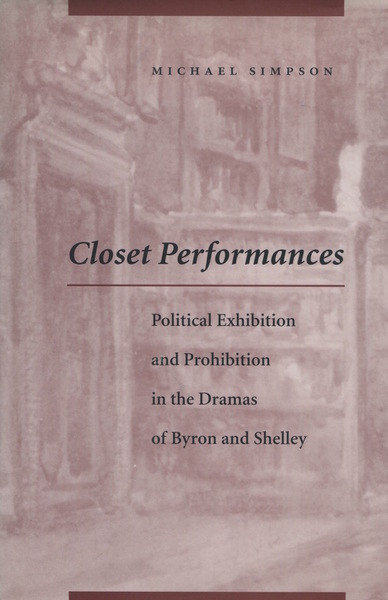 Displaced to Italy by their politics and morals, Byron and Shelley wrote, between 1816 and 1823, a series of closet dramas that the author reveals as being deeply embedded in contemporary radical culture. Why did they write dramas in Italy that were to be published in England but not to be produced theatrically? Why do these dramas invoke and apparently oppose textual and theatrical versions of themselves? In answering these questions, this book addresses other questions about the historical invention of English literature, the relation between literature and drama, and the relation between literature and political culture.

The plays are shown to acquiesce in, and yet also resist, subvert, and ironize by means of a parodic self-censorship, the political, theatrical, and ecclesiastical censorship of the post-Waterloo period. The author argues that they not only explore questions of political action in their plots but also reconstruct, by reconvening, a radical audience that had been virtually eliminated in England during the period of the counterrevolutionary and Napoleonic wars.

Like the radical culture of the 1790's, Byron and Shelley's plays are informed by a "new" politics of language. Focusing on the discursive conditions of radical culture and the plays, and bringing the procedures of cultural materialism into contact with those of deconstruction, the author highlights the political and literary operation of the plays' language. In the process, he shows how the plays contributed to the recrudescence of a polite radicalism that sought to align itself with and establish control over its plebeian counterpart.

Detailed discussion of individual plays—Manfred, Sardanapalus, Prometheus Unbound, Marino Faliero, Hellas, Cain, Heaven and Earth, The Two Foscari, and The Cenci—is supported by investigations into Romantic criticism of the drama, the dynamics of the reviewing journals, and the philosophical construct of the "closet" of reasoning and reading.

"Its impressively learned contentions from topics of historical fact are framed in a thoughtful context of literary-theoretical debate. . . . The scholarship and the critical perspicuity of Closet Performances make this book one of the best on its topic and one that is likely to be valuable as a resource and as a locus for contention for a long time to come."