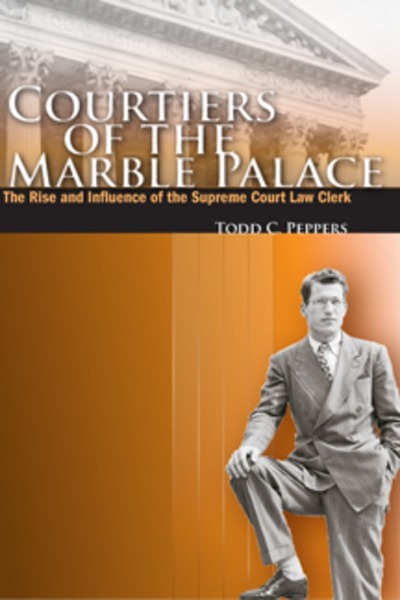 Courtiers of the Marble Palace
The Rise and Influence of the Supreme Court Law Clerk
Todd C. Peppers

Since the hiring of the first Supreme Court law clerk by Associate Justice Horace Gray in the late 1880s, court observers and the general public have demonstrated a consistent fascination with law clerks and the influence—real or imagined—that they wield over judicial decisions. While initially each Supreme Court justice hired a single clerk, today's justices can hire up to four new law school graduates. The justices have taken advantage of this resource, and in modern times law clerks have been given greater job duties and more responsibility. The increased use of law clerks has spawned a controversy about the role they play, and commentators have suggested that liberal or conservative clerks influence their justices' decision making. The influence debate is but one piece of a more important and largely unexamined puzzle regarding the hiring and utilization of Supreme Court law clerks.

Courtiers of the Marble Palace is the first systematic examination of the "clerkship institution"—the web of formal and informal norms and rules surrounding the hiring and utilization of law clerks by the individual justices on the United States Supreme Court. Todd Peppers provides an unprecedented view into the work lives of and day-to-day relationships between justices and their clerks; relationships that in some cases have extended to daily breakfasts, games of competitive basketball and tennis, and occasional holiday celebrations. Through personal interviews with fifty-three former clerks and correspondence with an additional ninety, as well as personal interviews with a number of non-clerks, including Justice Antonin Scalia, Peppers has amassed a body of information that reveals the true inner-workings of the clerkship institution.

Todd C. Peppers is Assistant Professor in the Department of Public Affairs at Roanoke College in Salem, Virginia.

"[This book], which [is] carefully researched and use multiple sources to confirm [its] findings, take us a long way toward a better understanding of the role of law clerks at the Supreme Court. . . [It] is an important addition to the scholarly literature on the Supreme Court."

"Law clerks have come to play an integral part in the work of the Supreme Court, and their role attracts considerable attention. Todd Peppers uses a rich body of information to illuminate who the clerks are and what they do in their work for the justices. Courtiers of the Marble Palace shows how and why the role of the clerks has evolved over the past century. In doing so it greatly enhances our understanding of Supreme Court clerkships and tells us much about the Court itself."

"This long-awaited book fills a huge gap in Supreme Court scholarship; information about Supreme Court clerks has heretofore been only patchy and anecdotal. Peppers's systematic efforts to gather information about this subject while remaining sensitive to the confidential relationship between Justices and their clerks pays off handsomely. The data he has gleaned through careful research are analyzed in a skillful and useful manner. Peppers's chapters on the stenographers and early clerks of the late nineteenth century are a particularly valuable contribution to Supreme Court history."

"This is a meticulous work of historical scholarship, tracing the evolution of the Supreme Court law clerk from its beginnings in the nineteenth century up to the present day. Refreshingly free of the gossip, politics, and rumors that have disfigured previous accounts of this important institution, the book manages to be not only scrupulous, but fascinating."

"This unique history of Supreme Court law clerks is a surprise gift to anyone who is fascinated by the Court as an institution. We have read or heard the recollections of individual clerks, but none of them could possibly tell this remarkable story of how the intimate work habits and thought processes of the Justices have evolved and been profoundly transformed over the last century."

"This is a fine piece of work, well and clearly written, and definitive as to the history and development of the position and work of Supreme Court law clerks. . . . It provides excellent background for understanding current debates about the role and influence of the clerks."

"Todd C. Peppers' Courtiers of the Marble Palace is a significant contribution to the sparse literature on the role and comprehension of the Supreme Court's law clerks, one that is all too frequently oversimplified and misinterpreted. Peppers evinces an admirable knowledge of the pertinent literature and has demonstrated a remarkable depth of research, much of it primary. His book merits close and sympathetic attention."

"Courtiers of the Marble Palace is a lively book about a significant subject."

"[Courtiers] exemplifies the scholarly benefits that come from applying the political scientist's tools to a legal institution." 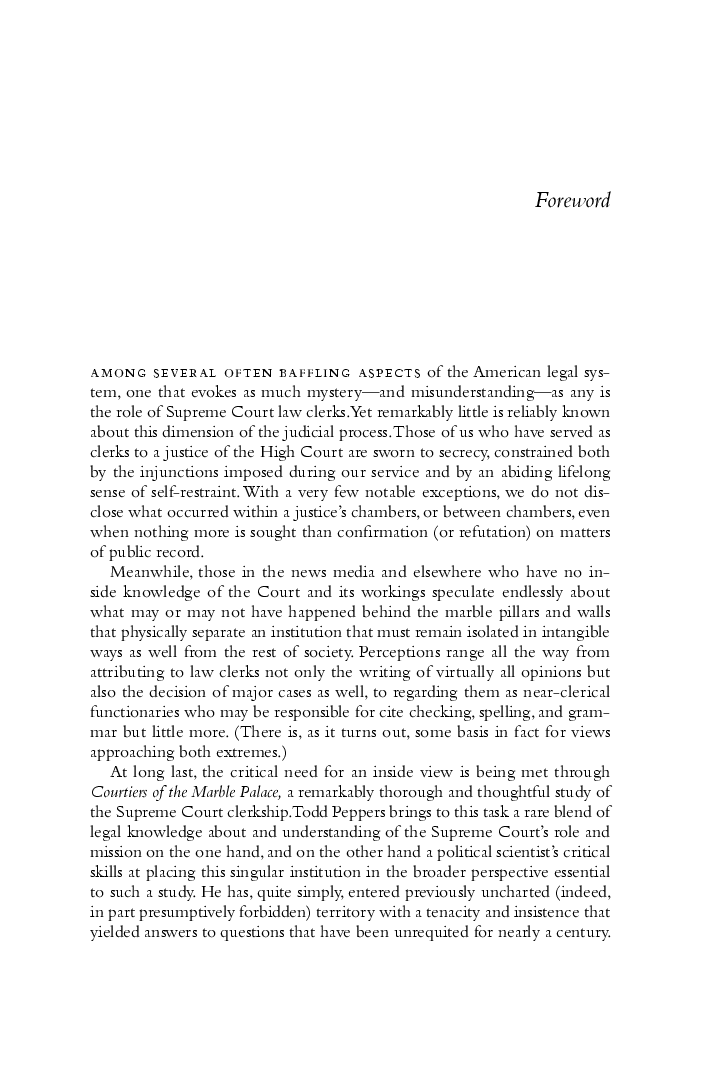 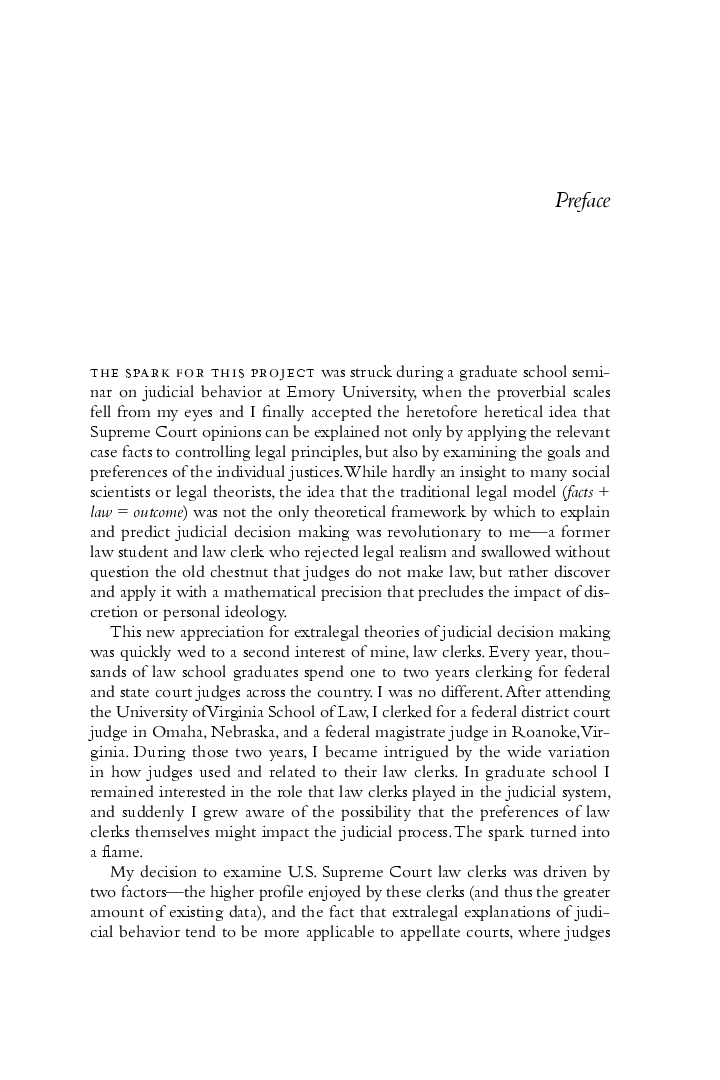 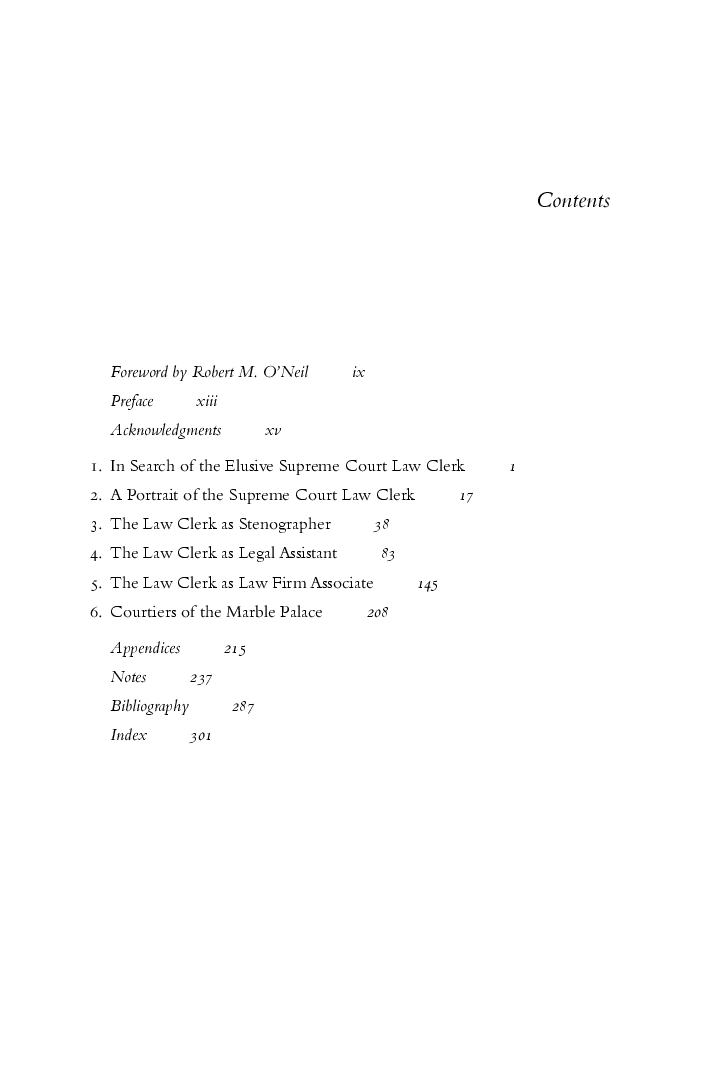