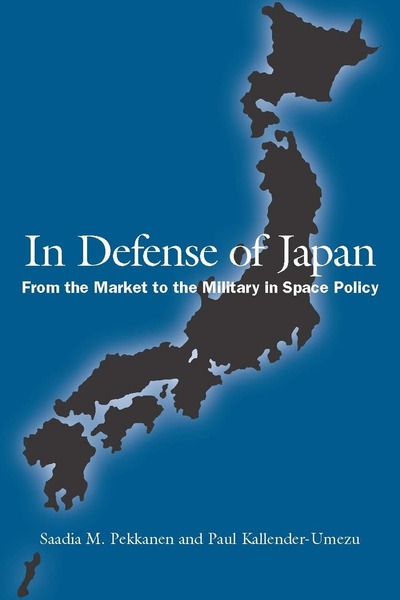 In Defense of Japan
From the Market to the Military in Space Policy
Saadia M. Pekkanen and Paul Kallender-Umezu

In Defense of Japan provides the first complete, up-to-date, English-language account of the history, politics, and policy of Japan's strategic space development. The dual-use nature of space technologies, meaning that they cut across both market and military applications, has had two important consequences for Japan. First, Japan has developed space technologies for the market in its civilian space program that have yet to be commercially competitive. Second, faced with rising geopolitical uncertainties and in the interest of their own economics, the makers of such technologies have been critical players in the shift from the market to the military in Japan's space capabilities and policy. This book shows how the sum total of market-to-military moves across space launch vehicles, satellites and spacecraft, and emerging related technologies, already mark Japan as an advanced military space power.

Saadia M. Pekkanen is Job and Gertrud Tamaki Professor at the Jackson School of International Studies, and Adjunct Professor of Law, at the University of Washington, Seattle.

Paul Kallender-Umezu is Japan Correspondent for Space News, and has been published widely in Japanese and domestic international media.

"In Defense of Japan remains an impressively well-researched and valuable book that makes a groundbreaking contribution to our understanding of Japan. — Thomas U. Berger, Journal of Japanese Studies

"There is an abundance of technical information here to satisfy readers with that particular interest, and the combination of Pekkanen's legal expertise coupled with Kallender-Uzemu's knowledge of Japan's space industry results in a richly detailed and insightful policy analysis that very few scholars in the field today could produce on their own. . . One hopes that policymakers in Washington, D.C. will take particular note of this publication and give it the careful and critical reading it deserves."

"[An] excellent case study on Japan's space policy . . . This book is a readable, cogent examination of the interaction of corporate interests with national security interests, and adds needed nuance to the emerging understanding of Japan as an important player in the field of international security."

"[V]ery ambitious and admirable. The book is based on very extensive research and it provides a good record of the path of Japanese space policy development. It is a good book to use as a concise data book of Japanese space history."

"In Defense of Japan draws substantively from an impressive number and variety of sources . . . [T]he authors siphon a wealth of factual detail to document the market-to-military trend . . . Anyone interested in reading a thoroughly researched, up-to-date, English-language treatise on the dual-use nature of Japan's evolving space activities need look no further than this particular volume, which might serve as a model for historically grounded analyses of other national space policies and programs."

"The subject of this book is highly technical . . . But the bottom line is clear enough: Japan's capabilities are widely underestimated, all the more so in space . . . The strategic logic for Japan's space program is obvious, with a growing naval, space, and nuclear power across the East China Sea and a second nuclear power even closer, on the Korean Peninsula . . . It is too soon to count Japan out in the arms race in Asia."

"What makes this book so useful and impressive is that it draws together extensive coverage of developments in Japan's space industry—both from the government and the corporate side—with a broad treatment of government reform and Japan's evolving security policy. In addition, it provides the most sustained argument I am aware of on the role of corporations in Japan's security policymaking." 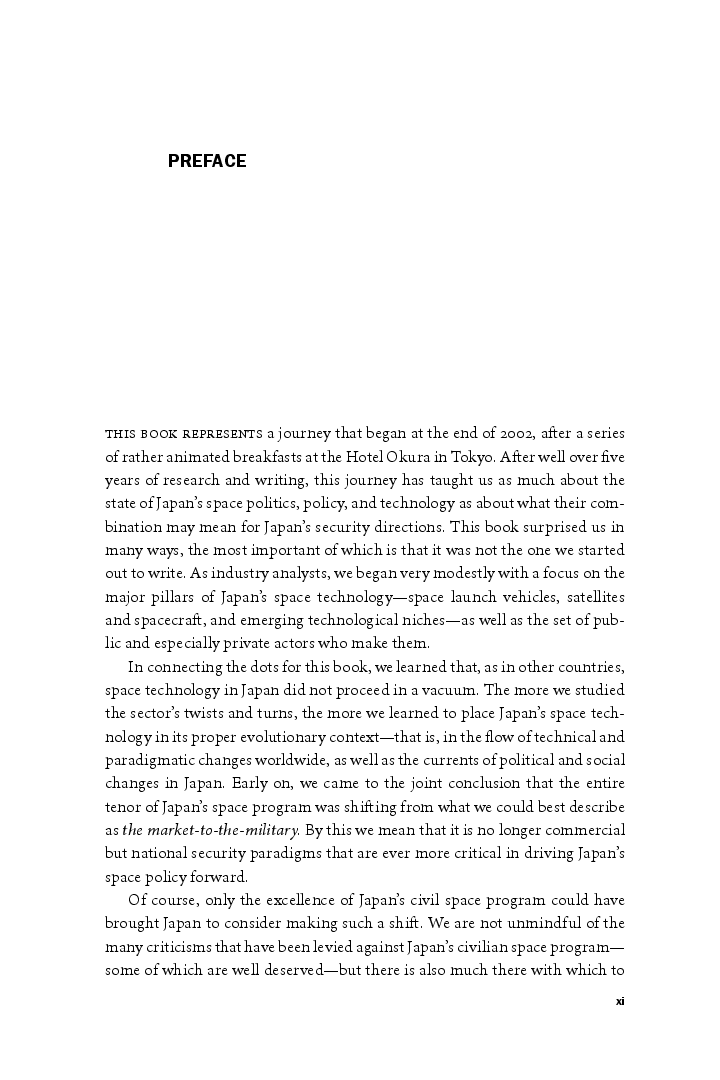 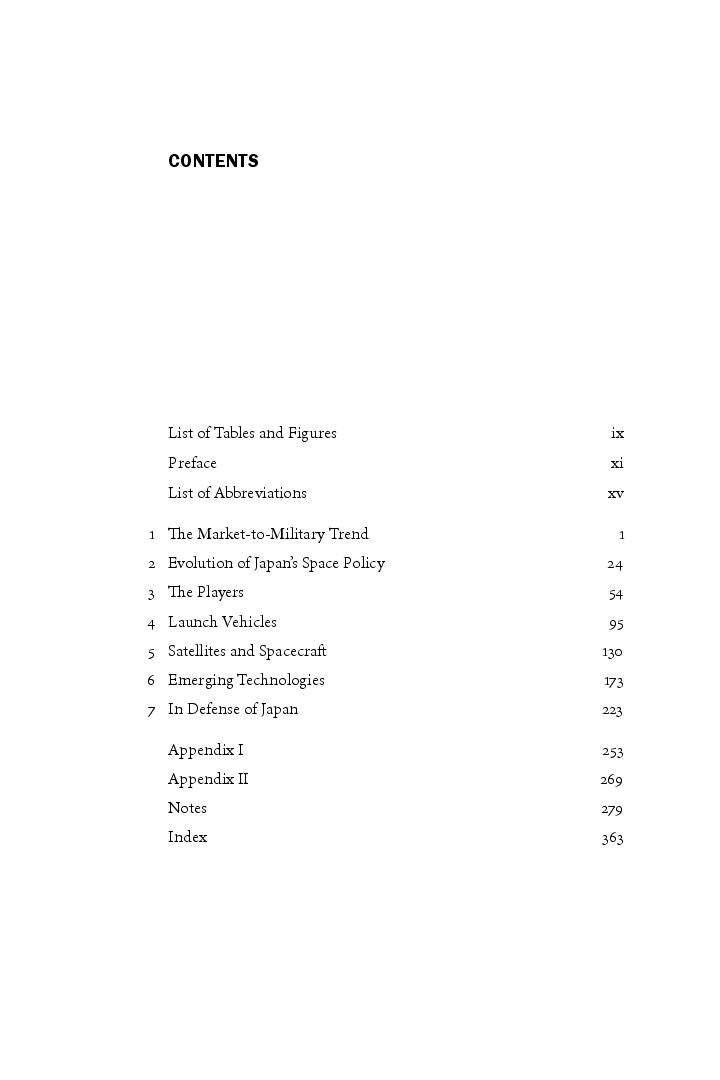 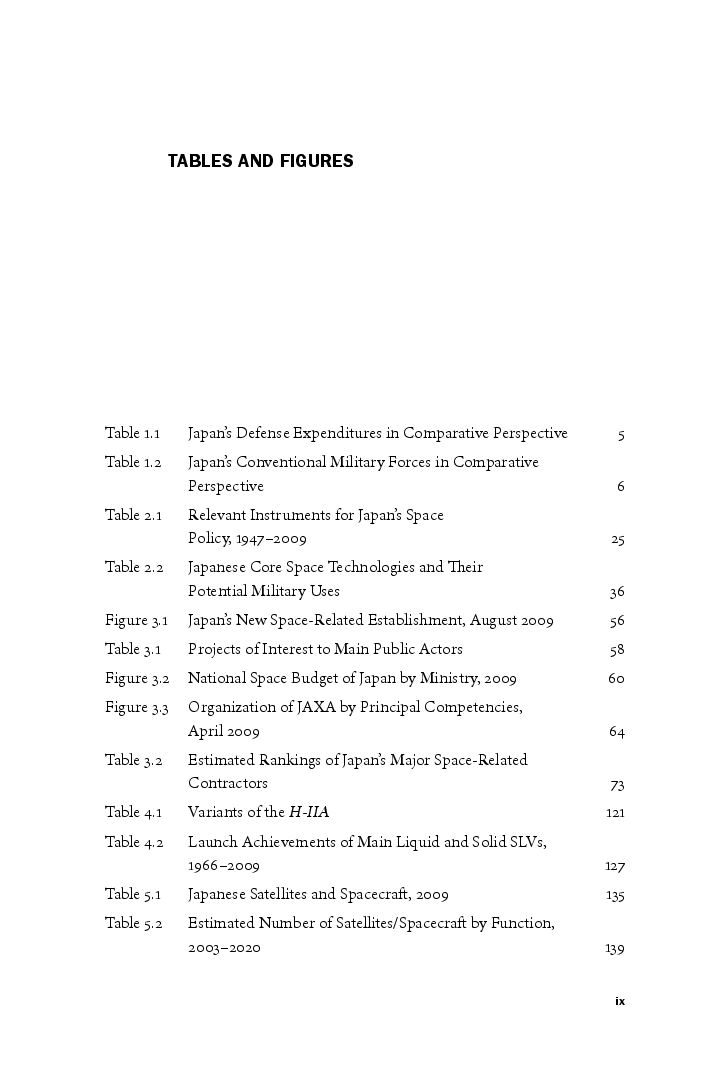