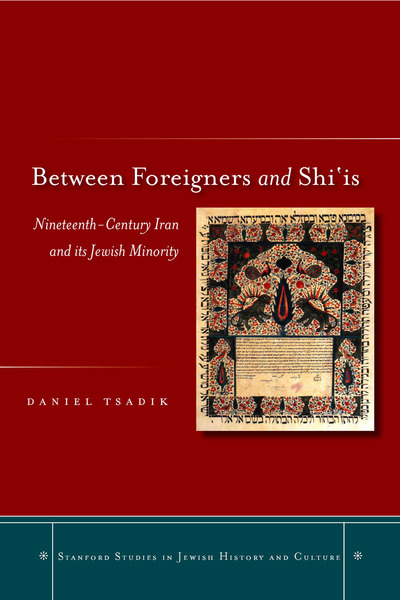 Between Foreigners and Shi‘is
Nineteenth-Century Iran and its Jewish Minority
Daniel Tsadik
SERIES: Stanford Studies in Jewish History and Culture

Based on archival and primary sources in Persian, Hebrew, Judeo-Persian, Arabic, and European languages, Between Foreigners and Shi'is examines the Jews' religious, social, and political status in nineteenth-century Iran. This book, which focuses on Nasir al-Din Shah's reign (1848-1896), is the first comprehensive scholarly attempt to weave all these threads into a single tapestry. This case study of the Jewish minority illuminates broader processes pertaining to other religious minorities and Iranian society in general, and the interaction among intervening foreigners, the Shi'i majority, and local Jews helps us understand Iranian dilemmas that have persisted well beyond the second half of the nineteenth century.

Daniel Tsadik researches the modern history of Iran, Shi'ah Islam, and Iran's religious minorities. A Fulbright scholar, he earned his Ph.D from the History Department at Yale University.

"Tsadik recaptures the history of their everyday life, along with that of the Muslim majority and other minority communities. This approach makes significant departure from the existing scholarship and is thus praiseworthy. Tsadik skillfully integrates a wide range of sources, written in Persian, English, Hebrew, and French."

"...Daniel Tsadik has written an excellent book, illuminating the complexities of the social dynamics of Iranian cities in the late nineteenth century."

"Tsadik weaves the story of Iranian Jews within the larger context of the vicissitudes of reform attempts in Iran, its widening and problematic ties with Europe, and within the broader Jewish story of the period. In providing this rich and multifaceted picture, Tsadik's book is a welcome addition to the field, and is highly recommended to anyone interested in the nineteenth century history of Iran, in the history of Middle Eastern Jewish communities and all Middle Eastern religious minorities."

"Between Foreigners and Shiis is an engagingly written and meticulously documented account of the dynamics of Jewish life in Qajar Iran. With linguistic skill, first-hand cultural familiarity, and impressive analytical acumen, Daniel Tsadik has mined a wide range of archival and printed sources in various Middle Eastern and European languages. The historical tableau that he has painted is carefully nuanced and shaded. He shows the complex interplay of different internal attitudes and trends, outside intervention by western Jewish elites and European governments, and the coping strategies of Iranian Jews themselves. Tsadik is careful to show the vicissitudes of Jewish life in a pre-modern, traditional Shiite state while always pointing out that attitudes of Muslim clerics and theologians were by no means monolithic. This book could not have appeared at a more opportune time. First, it fills in a major gap in the history of Jews in the Persian-speaking world. Second, it provides much needed background to understanding the theological and socio-legal framework of today's Islamic Republic of Iran which is home to the largest Jewish community remaining in the entire Islamic world. This is a major contribution to both Judaic and Islamic historical studies and will—I believe—remain the standard work on the subject for a long time to come."

"Daniel Tsadik's impressive study of the Iranian Jewry in the 19th century utilizes extensive archival and other Persian, Hebrew, and European sources to narrate the multifaceted story of Jewish community's interaction with the Qajar state, the Shii clerical establishment, the European powers and the Iranian society at large. This is an original and timely study that fills an important gap in historiography of modern Iran."

"Daniel Tsadik has effectively mined and assessed the sources in this readable book on the trials of the Jewish community in nineteenth century Iran and on the efforts of Iranian rulers, under Western pressure, to assure them better treatment. This is an important book for all interested in Jewish, Iranian, and Middle Eastern history."

"Daniel Tsadik's thorough, essential, and ground-breaking study enriches significantly our knowledge of Iran's Jewry in the nineteenth century. It sheds critical light on the tensions between the Shiite hierocracy and the secularizing pressures without which it is impossible to understand contemporary Iran."

"Focusing on the reign of Nasir al-Din Shah (1848-1896) in Iran, Daniel Tsadik examines developments in the position of Jews as a minority in Iran during the nineteenth century. This thorough study is an important contribution to our knowledge of Iranian Jews as well as for the study of Middle Eastern Jews, Iran, the Middle East, minorities, and relations between the Middle East and foreign powers, and should be in academic libraries with collections on these topics."

"Between Foreigners and Shi'is is an important addition to the library of those interested in Iranian or Jewish history. Hopefully, Tsadik will produce a sequel continuing his narrative through the twentieth century to the present day."

"Between Foreigners and Shi'is, a ground-breaking work that will henceforth prove indispensible to any researcher of modern Judeo-Persian studies, is a meticulous piece of scholarship that brings as much novelty to its own field as it does to modern Iranian historiography, Middle Eastern political studies, and Islamic studies."

"Daniel Tsadik's detailed and abundantly-sourced study certainly goes a long way to furthering knowledge in regard to the position of Iran's Jewish community in the mid-to-late nineteenth century.... Tsadik's excellent study... not only sheds light on the plight of the Jews in Qajar Iran, it also provides valuable insights into issues facing other religious minorities in the country, and into Qajar society in the Nasiri period as a whole."

"This is an important, pioneering historical study of the Jewish minority of Persia, using the canons of contemporary Western academic scholarship .... Highly recommended."

"Based on numerous sources... a thoroughly documented and original critical essay... up to this day, this is the most exhaustive research on the fate of Jews in Iran in the 19th century... a noteworthy work."

"Using an impressive range of archival, manuscript, and published primary and secondary sources, Tsadik describes the internal societal tensions and the mounting external pressures that contributed [. . .] to anti-Jewish reactions on the part of the Shi'ite clerical establishment and the populace [. . .] and to modest improvements in the Jews' civil status . . . [The book is a] major and timely contribution[] to Jewish, Iranian, and Middle Eastern studies." 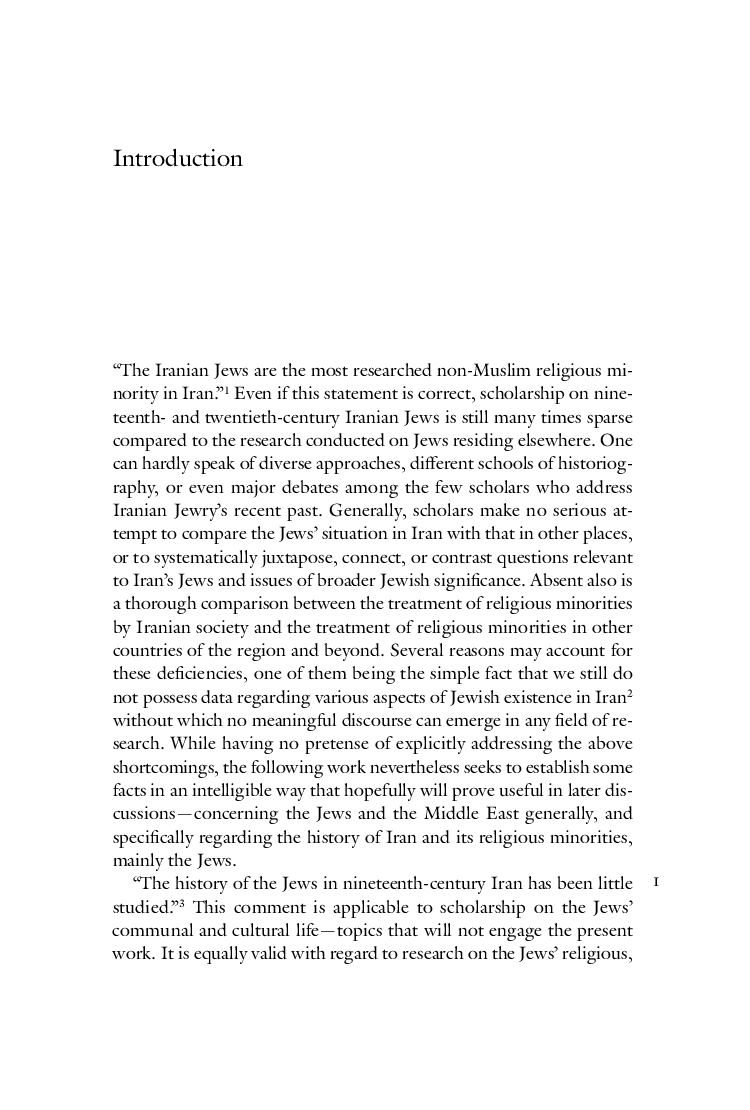 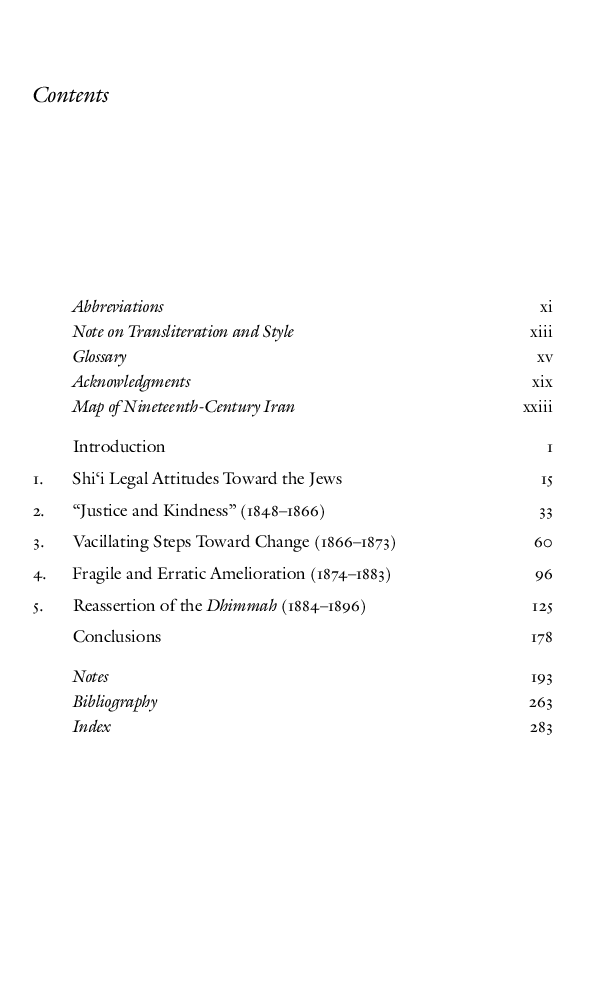