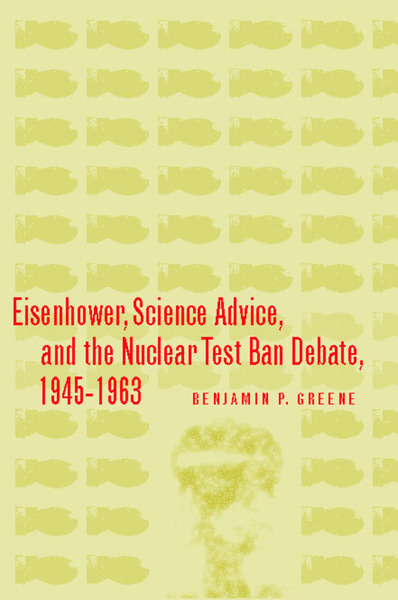 Based on extensive research in government archives and private papers, this book analyzes the secret debate within the Eisenhower administration over the pursuit of a nuclear test-ban agreement. In contrast to much recent scholarship, this study concludes that Eisenhower strongly desired to reach an accord with the Soviet Union and the United Kingdom to cease nuclear weapons testing. For Eisenhower, a test ban would ease Cold War tensions, slow the nuclear arms race, and build confidence toward disarmament; however, he faced continual resistance from his early scientific advisers, most notably Lewis L. Strauss and Edward Teller. Extensive research into previously unavailable government archival sources and collections of private manuscripts reveals the manipulative acts of test-ban opponents and other factors that inhibited Eisenhower's actions throughout his presidency. Meticulously analyzed, these sources underscore Eisenhower's dependence on the counsel of his science advisors, such as Strauss, James R. Killian, and George B. Kistiakowsky, to determine the course he pursued in regard to several components of his national security strategy. In addition to its comprehensive analysis of the test-ban debate, this book makes important contributions to the scholarly literature assessing Eisenhower's leadership and his approach to arms control.

"Greene offers an intriguing argument to explain why the president failed [to negotiate a comprehensive nuclear test-ban treaty with the USSR]. His book is carefully crafted, it is methodologically sound, and it makes a genuine contribution to scholarship on the politics of science and technology in the cold war. Greene's conclusions, however, are bound to be controversial because of what they say not only about science advice but about Eisenhower's control over his own administration."

"Greene's thoroughly researched and well-written book promotes a clear thesis: The scientists who advised Eisenhower played the 'pivotal role' in shaping his attitudes about the test ban and thus shaped the test-ban debate."

"This is a very valuable study, based on an exhaustive survey of the sources that have become available in the past four decades of what may, or may not, have been an important missed opportunity for a total ban on nuclear testing before 1961."

"Benjamin P. Greene's monograph is an exemplary study of the interaction of geopolitics, bureaucratic maneuvering, and scientific claims during the Dwight D. Eisenhower administration. The careful research and important arguments of Greene's monograph make it essential reading for historians interested in the Cold War, arms control, nuclear decision making, and the history of science policy."

"Greene's book is a valuable addition to the historical literature on US policy on nuclear weapons and on the role of presidential science advising in the early Cold War period. [Greene] succeeds in making a strong case that Eisenhower was disappointed that he did not achieve a nuclear test-ban treaty during his presidency."

"Greene provides a major and convincing new interpretation of Eisenhower's efforts, and shows that they were heavily influenced by the scientific advice he received . . . It is strongly recommended to those interested in the history of scientific-political interaction, nuclear research and diplomacy, and of the Eisenhower presidency."

"Other scholars have written about science advice in presidential administrations, but Benjamin P. Greene's account is the most thorough on the complicated role of scientists in the ongoing development of Eisenhower's test ban policies." 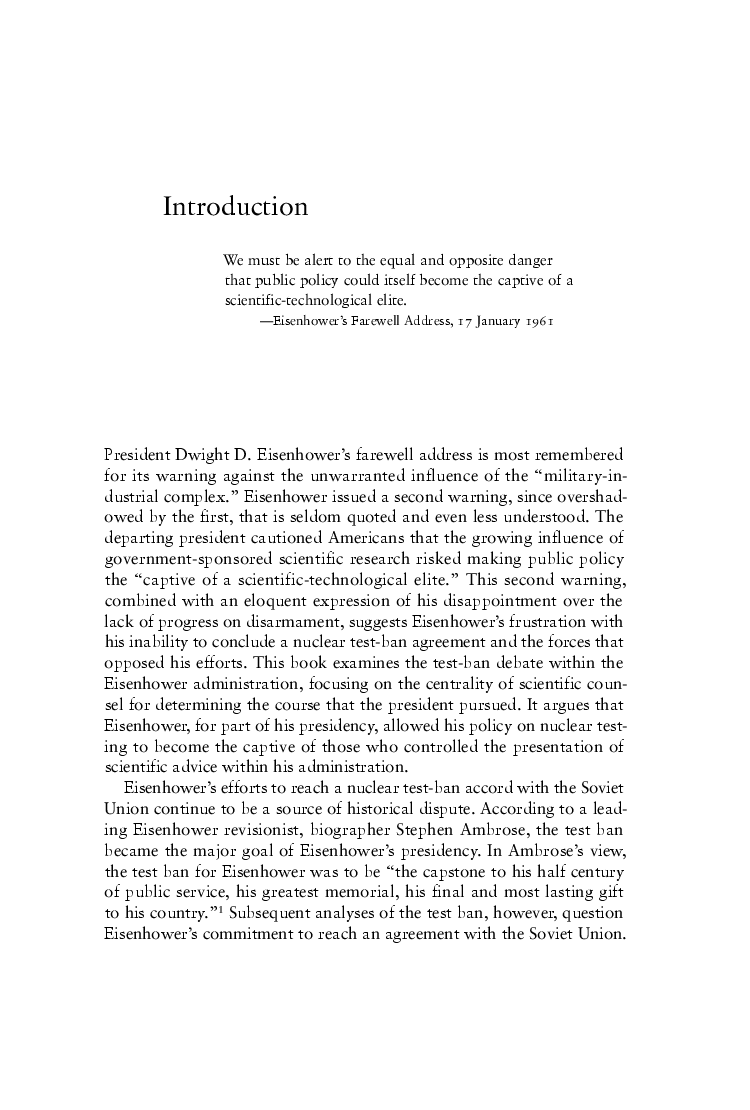 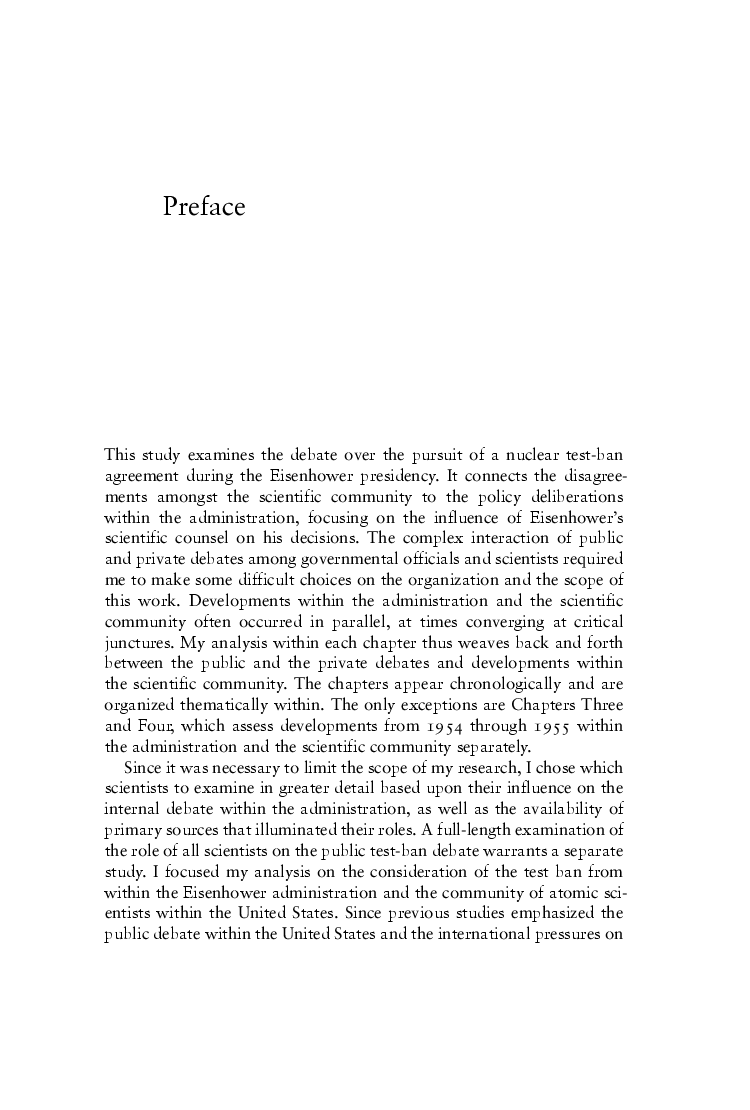 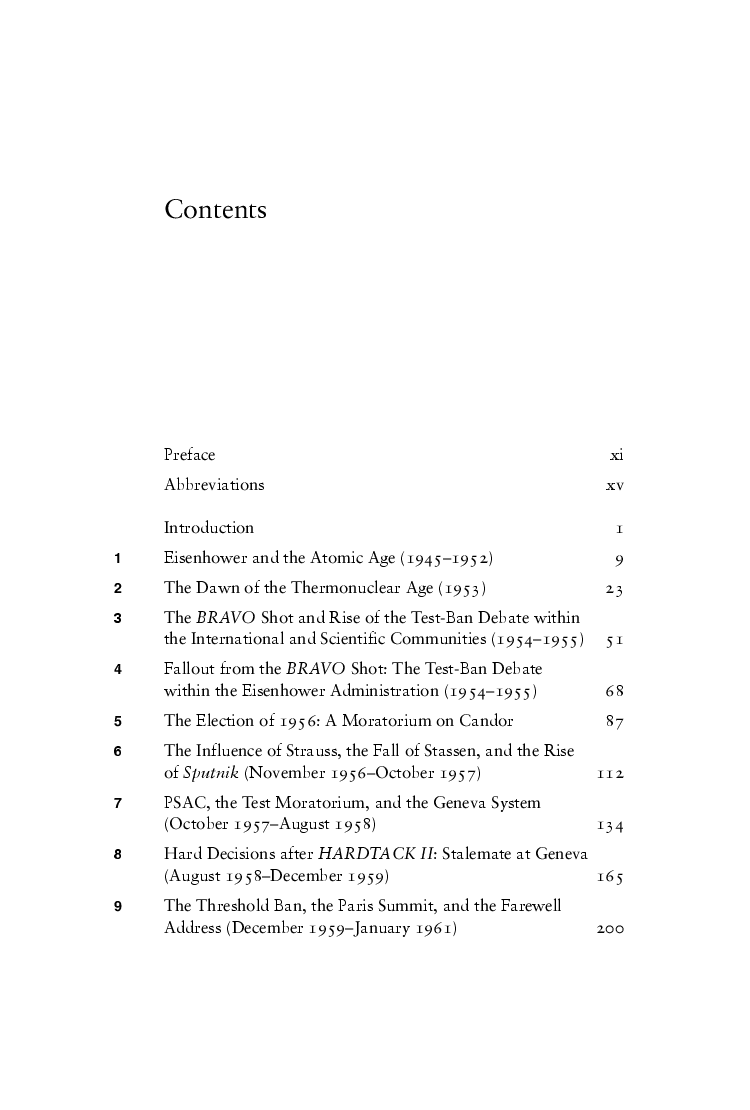