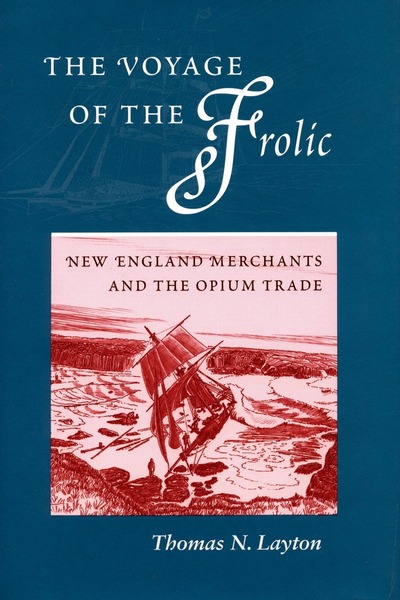 The Voyage of the ‘Frolic’
New England Merchants and the Opium Trade
Thomas N. Layton

In the late summer of 1984, the author and a group of his archaeology students excavated fragments of Chinese porcelain at the site of a Pomo Indian village a hundred miles north of San Francisco. How did these ceramics, which were more than a hundred years old, find their way to this remote area? And what could one make of local legend that told of Pomo women wearing Chinese silk shawls in the 1850's? The author determined to find the answers to these questions, never dreaming that his quest would eventually involve the lives of nineteenth-century Boston merchants, Baltimore shipbuilders, Bombay opium brokers, and newly rich businessmen in gold rush San Francisco.

The author soon learned that in 1850 the clipper Frolic, a sailing ship built specifically for the Asian opium trade, had wrecked on the Mendocino coast, a few miles from the Pomo village. He unearthed the business records of its owners, A. Heard & Co., which showed that respectable Bostonians had made their fortunes running opium from India to China. The family histories of the firm's two most influential partners are traced from the American Revolution to their joint decision to order a custom-built Baltimore clipper for the opium trade. In describing the design, construction, and outfitting of the Frolic, the author was aided by a stroke of luck—a slave named Fred Bailey, later known to the world as the abolitionist Frederick Douglass, worked in the Frolic's shipyard in 1836 and wrote detailed descriptions of the building of such ships.

The Frolic, under Captain Edward Faucon (who was depicted as the "good" captain in Richard Henry Dana's Two Years Before the Mast) plied the opium trade from Bombay to China from 1845 to 1850. The author describes the political, financial, and logistical aspects of the profitable enterprise before 1849, when the introduction of steam vessels into the opium trade made the Frolic obsolete as an opium clipper. However, the California gold rush created a lucrative market for Chinese goods, and the Heard firm dispatched the Frolic to San Francisco with a diverse cargo that included silks, porcelain, jewelry, and furniture. When the Frolic wrecked on the Mendocino coast, the Pomo Indians salvaged its cargo, and the vessel's history passed into folk tradition.

The subsequent lives of those intimately associated with the Frolic are profiled. The owners' families preferred to forget the source of their fortunes, and prior to her death in 1942, the daughter of the Frolic's captain burned her father's papers to preserve his reputation. She could not know that in 1965 sports divers would discover the remains of her father's opium clipper, and that 134 years after its wreck, the Frolic's story would inspire an archaeologist-anthropologist to pursue its colorful history.

"A business history focusing on one firm's involvement in a lucrative drug trade at the middle of the 19th century, Layton's work is extremely well conceived, well written, and exhaustively researched. Highly recommended."

"An exemplary text that brings together the fields of archaeology and history in stimulating and provocative ways."

"A fascinating glimpse at a piece of the American past that had been not merely forgotten but in some cases deliberately ignored. . . . An alluring and revealing story."

"A fascinating look at a little known slice of American history, filled with dozens of colorful anecdotes."

"Like a sleuth, Layton was able to uncover the mystery behind a ship that was wrecked off the coast of California in 1850 and the history that got her there. His research is intense, exact, and diligent."