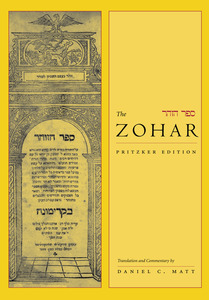 Ever since it emerged mysteriously in Castile, Spain toward the end of the 13th century, the Zohar has enthralled, confounded, challenged, and enraptured readers. Composed mostly in lyrical Aramaic, the Zohar is a mosaic of Bible, medieval homily, spiritual fantasy, and imaginative commentary, or midrash, on the Torah written in the form of a mystical novel. In it a group of rabbis wander through the hills of Galilee, discovering and sharing secrets of Torah: at times they interpret the actions of biblical figures, and at other times, they take center stage themselves through their adventures on the road and their encounters with various astonishing characters. The scope of the Zohar is far greater than a single book; it is virtually an entire body of literature, whose central theme is the intimacy between human beings and God. In this lies one of the Zohar's boldest propositions, the capacity of the human being to effect change in the divine realm. Awestruck by the profundity of its insights, symbolism, and dreamlike images, Jews in many lands over the centuries have come to accept the Zohar as revealed truth—no less sacred than the two other major texts of their religion, the Torah and the Talmud. And yet, until now, there has never been a fully reliable comprehensive, scholarly English translation of this revered work with line-by-line commentary.

In a monumental undertaking, Daniel C. Matt, one of the world's foremost authorities on Jewish mysticism, has spent 20 years creating a 12-volume, annotated English translation of the Zohar. This is the first translation ever made from a critical Aramaic text of the Zohar, which has been established by Professor Matt based on a wide range of original manuscripts. The extensive commentary, appearing at the bottom of each page, clarifies the kabbalistic symbolism and terminology, and cites sources and parallels from biblical, rabbinic, and kabbalistic texts. The translator's introduction is accompanied by a second introduction written by Arthur Green, discussing the origin and significance of the Zohar.

THE COMPLETE WORKS OF FRIEDRICH NIETZSCHE

CULTURAL MEMORY IN THE PRESENT

THE CULTURAL LIVES OF LAW

EMERGING FRONTIERS IN THE GLOBAL ECONOMY

INNOVATION AND TECHNOLOGY IN THE WORLD ECONOMY

SQUARE ONE: FIRST-ORDER QUESTIONS IN THE HUMANITIES

STANFORD STUDIES IN LAW AND POLITICS

STANFORD STUDIES IN MIDDLE EASTERN AND ISLAMIC SOCIETIES AND CULTURES