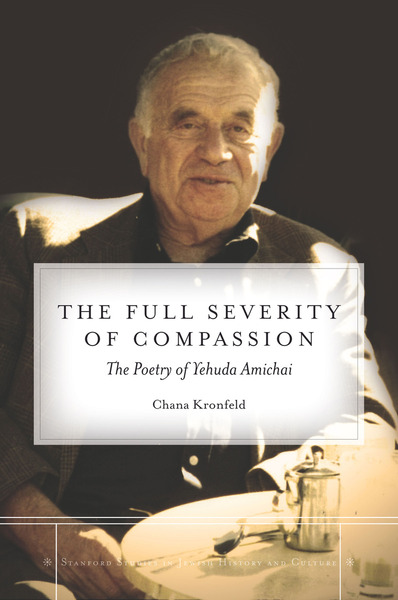 A biography of Yehuda Amichai and the arc of his life in poetry is interwoven with a discussion of autobiography and its role in lending Amichai's avant-garde lyric a deceptively simple impression.

This chapter traces Amichai's reception and appropriation as a "national poet" of official celebrations in Israel and as a poet of simple religiosity in the Jewish American synagogue. Arguing that revolutionary poetry is too "dangerous" to be left alone to do its work, the chapter interrogates these misreadings not as mistakes that should be corrected but as informative expressions of hegemonic processes of canon formation. By contrast, the chapter illustrates the wrath with which early critics received his work, labeling it revolutionary and heretical – all this in an attempt to restore our ability to perceive these features in Amichai's poetry even today, despite its massive cooptation. The chapter also critiques the over-emphasis on thematics in literary studies, theorizing from Amichai's work a model for the politics of poetic form.

2 "In the Narrow Between": Amichai's Poetic System
chapter abstract

Simplicity and accessibility are for Amichai serious ethical principles, guidelines for a poetic effect that are part of the fabric of everyday life, not just the mark of "a playful poet" writing "easy" verse who has "no worldview," as some scholars have argued, mistaking his egalitarian imperative for a lack of philosophical gravitas. Poetic philosophy is revealed in the process to be a feature of stylistics as of thematics. Chapter Two outlines the major principles that underlie Amichai's poetic philosophy, focusing on the state of "in-between-ness" as the privileged yet endangered site of the poetic subjects-cum-ordinary human beings. This sets the stage for an array of systematic correlations between liminality as the governing feature of Amichai's poetic worldview and many of his signature rhetorical practices discussed throughout the book, such as juxtaposition, intertextuality and metaphor, which map two domains together without ignoring their distinctness.

3 "I Want to Mix Up the Bible": Intertextuality, Agency, and the Poetics of Radical Allusion
chapter abstract

Famous for his iconoclastic allusions to sacred texts, Amichai is able to subject these sources to irreverent rewritings without producing a hermetic poetry. His intertextual collage co-exists with lucidity and readerly accessibility. The chapter retheorizes intertextuality through Amichai's rhetorical practice to call into question contemporary Western theories in the field. Using Amichai's unique combination of Jewish and matrilineal notions of literary tradition and (inter)textual exegesis, the chapter engages critically with Harold Bloom's model of "the anxiety of influence," and its bourgeois-individualist, male-Oedipal struggle between "strong poets;" it also critiques the poststructuralist view of intertextuality as "an anonymous tissue of citations" through Amichai's insistence on a historically inflected human agent as central to any process of recycling a culture's texts. This agency, though censored and limited, offers a possibility of resisting interpellation by the act of changing the words of its subjugating command, in Judith Butler's terms.

Amichai sees the work of translation as a model for the poet's own in-between-ness, as well as for the translator/poet's inescapable secondariness. That the poet, like the translator, plays an immanently mediational position is a source of comfort rather than anxiety. This view of the poet's role sheds new light on contemporary theories of translation as cultural negotiation and their focus on asymmetrical power relations between source and target language. Amichai's poems about translation are read as celebrating the imperfect "recycling of words," describing translation as the epitome of all intertextuality, and ultimately of the creative process itself. Through Amichai's ecology of language, the chapter interrogates the ideological blind spots behind the numerous mistranslations that Amichai has been subjected to, not in order to advocate some correct rendition, but rather to suggest the ways in which they express what Gayatri Spivak has termed "the politics of translation."

5 Living on the Hyphen: The Necessary Metaphor
chapter abstract

Metaphor embodies Amichai's principle of "in-between-ness" and has a significance within his poetic system that far exceeds the rhetorical. Chapter Five focuses on metaphor as the central marker of liminality, the hyphen of survival and resistance: it must never erase that hyphen, the marker of the disparate domains which it brings together (hence his preference for simile), even while it strives to make the gap between these domains productive of meaning. The ways Amichai's metaphors resist the erasure of difference critiques the vestiges of poststructuralist views, and offer an alternative model based on a historicized, context-sensitive reworking of prototype semantics. Amichai's images, while as novel and surprising as those of any 17th-century metaphysical poet, nevertheless strike us as completely "right," as visually and experientially familiar, because of their perceptually primary basis and the extensive and rigorous mapping they provide for the distant source and target domains.

Amichai extols the poet's freedom to oscillate between generational trends and poetic styles, while cherishing his outsider role and calling into question the underlying assumptions behind the generational model itself. His self-description as an inter-generational "double-agent" has presented a real problem for normative Hebrew literary historiography, with its teleological, unidirectional notions of a literary lineage, and has occasioned an impassioned debate. This literally subversive statement also articulates Amichai's post-Marxist critique of teleological historicism, his aversion to chronological order; and his preference for a simultaneous representation of personal and collective temporalities either as a fragmentary "archeology of the self" or as a fault-line geology. The chapter explores Amichai's resistance to the normative historiographic narrative of Hebrew literature, as well his refusal to reject his literary predecessors, a rejection prescribed in the manifestos of the self-proclaimed leader of the Statehood Generation, Natan Zach.