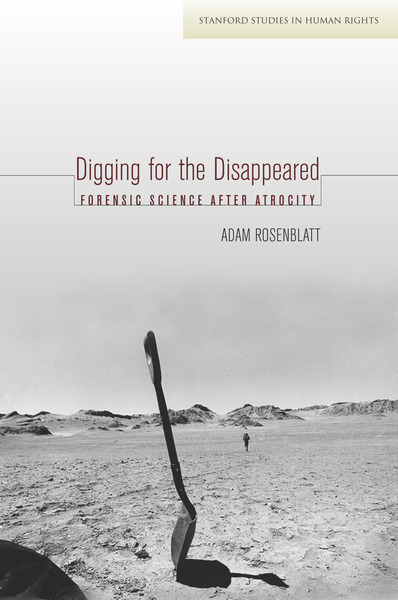 Digging for the Disappeared
Forensic Science after Atrocity
Adam Rosenblatt

This chapter analyzes the politics of mass graves through the lens of three major stakeholders: courts and war crimes tribunals, transitional governments, and families of the missing. It argues for the necessity of an international perspective based on common dynamics around mass gravesites, the global circulation of forensic experts, and the construction of ethics in the field. Mid-1990s exhumations in Bosnia and Kosovo are described as a "formative controversy" pitting the pressure to collect evidence quickly against the needs of families of the missing. The chapter also looks at two ways of framing the purposes of forensic investigations and the needs of stakeholders: creating a historical record backed by science and building capacity in post-conflict nations. The chapter concludes with a look at the process of identifying Chile's "disappeared," which illustrates how scientific and political realities can complicate simple narratives of collective memory and capacity-building.

2 The Politics of Grief
chapter abstract

An early and enduring objection to mass grave exhumation is that in offering "closure" to individuals, it undercuts political demands for justice. This perspective was voiced most famously by some of Argentina's famous human rights activists, the Madres de Plaza de Mayo, whose opposing views on exhumation eventually fueled a schism in their ranks. This chapter argues that the Madres' views must be understood within the context of Argentina's particular transitional justice history, as well as for their subsequent impact on families of the missing globally. In contrast to other scholarship, the chapter pays equal attention to the pro-exhumation perspective of the "Línea Fundadora" group of Madres, generally written off as more straightforward and less radical than their peers. Their stance, it argues, is founded on compelling views of the political impact of exhumations, duties to the children of the "disappeared," and the care of the dead.

3 Forensics of the Sacred
chapter abstract

This chapter examines another important reason some mass graves have not been exhumed: the belief that graves and dead bodies are sacred, and that to disturb them is a desecration. Using halted exhumations of Holocaust-era graves of Jews in Jedwabne, Poland and of massacred refugees in Congo as examples, it argues that the dynamics at these gravesites should not be viewed as clashes between international justice and "local culture" because the interests fueling religious objections are neither exclusively local nor solely religious. The chapter looks at recommendations that have been provided to forensic teams for handling these highly charged situations, and finds that they share a longstanding discomfort—present since the drafting of the Universal Declaration of Human Rights—with how the idea of the sacred interacts with the language and imperatives of human rights in both theory and practice.

The rights of the dead, rarely invoked by forensic experts, are a last frontier for a field that has already embraced new human rights to truth, knowledge, and even mourning. Yet this frontier of human rights is essential to understanding forensic teams as political communities, the ways their successes and failures are measured, and what role the dead themselves play in the global project of exhumation. This chapter argues that violence against the dead, unlike that directed towards the living, may render them permanently rightless—and that human rights are thus a poor way to understand what exhumation and identification do for the dead. The chapter begins a more modest, concrete description of the changes forensic experts make to dead bodies by detailing the three major types of violence inflicted upon the bodies in mass graves—destruction of identity, placement in an unchosen location, and deprivation of care.

5 Caring for the Dead
chapter abstract

This chapter offers a care perspective on international forensic investigations and a definition of care in the context of mass graves. It presents care ethics as a way of focusing on relationships and processes over abstract principles, and argues for their importance in describing the relationships between forensic experts, dead bodies, and mourners. Rather than a replacement for human rights or recipe for paternalism, care can also illuminate the dangers and delicate balances of forensic work. The chapter uses examples from memoirs and interviews to show how care and its absence are felt in the field—including in the relationships between forensic investigators. It ends with a call to combine the strands of science and humanism present in forensic investigation by seeing dead bodies as part of a wider landscape of "precious things" and of professions that have dedicated themselves to the repair and maintenance of those things.

This chapter provides a historical overview of how forensic science came to be used in the service of human rights causes, beginning with the Grandmothers of the Plaza de Mayo's request for help from American forensic experts to conduct scientific exhumations of Argentina's "disappeared" and aid in the search for their kidnapped grandchildren. It describes forensic investigations as an increasingly institutionalized part of the international response to conflict—a global project of unearthing the dead—which has challenged traditional notions of the purposes of forensic science and required significant adaptation to unforeseen conditions on the ground. The book introduces some of the disciplines involved in forensic investigation, and then outlines four ethical tenets shared by organizations that conduct these investigations through a human rights lens: science as a privileged form of truth, political autonomy, moral universalism, and a focus on the needs of victims and mourners.