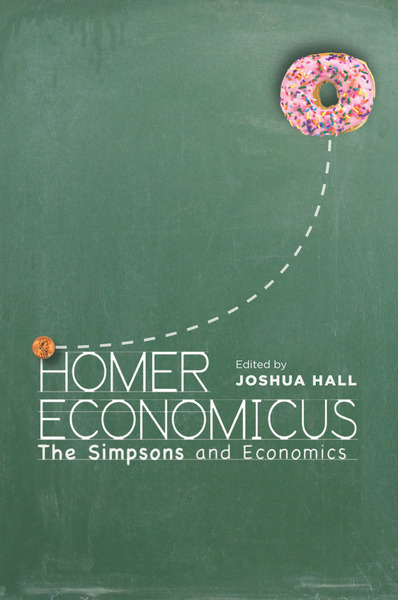 Homer Economicus
The Simpsons and Economics
Edited by Joshua Hall

I was living in a suburb of Columbus, Ohio, when I got my first taste of teaching economics. I was asked at the last second to fill in on a principles of economics section at a small university near my home called Capital University. Though I had been a teaching assistant for many classes while earning a masters degree in economics, I had never had complete control over the classroom. It seemed to me that there were two main questions I needed to answer: What did I want my students to learn? and Did I want to be a “guide on the side” or a “sage on the stage?”

Answering the first question was easy (and not just because I knew the name of the course!). Since my graduate school days, I had been concerned that we were going about teaching principles all wrong. Most people who take an economics course are never going to take another one in their lives. Knowing that, principles courses should not be focused on preparing students for advanced study of economics but instead giving them tools and insight that will help them at work, at home, and at the ballot box. My job as a teacher was to show them how economics explained the world around them, not just some lines on a chalkboard. The bigger question was how to do it.

While the first couple of days convinced me that I preferred to lecture, I also realized that a two-hour lecture was just too long if you didn’t break it up every thirty minutes or so. How could I break things up and show students that economics was everywhere? At first I would just stop the lecture and illustrate a topic with an example from that day’s newspaper or by discussing how a scene from a classic movie or television show illustrated a concept. I soon realized that most of my examples were coming from The Simpsons, and as luck would have it, the first couple of seasons of that program were just starting to come out on DVD. So I began to show brief snippets of episodes in class when appropriate. I quickly found that students loved to talk about The Simpsons and to learn by using examples from the show. Students began to come up to me and say things like, “Did you see in last night’s episode Homer’s fear about donating a kidney to his dad illustrated the trade-offs organ donors face?” In my mind, that was a clear sign that using The Simpsons was getting them to engage with the course material.

Nearly a decade later, I have taught thousands of students using The Simpsons, authored one article1 and coauthored another2 on how to use The Simpsons in the classroom, and edited the book you hold in your hands. The origins of this volume began with a conversation I had over dinner with two economists, Deirdre McCloskey and Bob Lawson. I told them I was writing an article on using The Simpsons in the economics classroom, and I planned on calling it “Homer Economicus,” a play on the Latin phrase homo economicus, which is often translated as “economic man.”3 McCloskey’s response was roughly, “A title like that deserves a book.”

So while I did originally ignore McCloskey’s advice, after running into dozens of economists over the years that were using The Simpsons in the classroom, I realized that she was right. A title like that did deserve a book, and the only question was how to get it done. After all, I could write it, but what fun would that be? Instead, I contacted dozens of excellent economics teachers and scholars who were also Simpsons fans and asked them if they would be willing to contribute to a volume explaining how the show illustrates homer economicus in action. The response was tremendous, as my inbox was flooded by essays using The Simpsons to illustrate concepts in economics from general ones such as money or unintended consequences to very specific areas of inquiry such as health economics or the economics of prohibition. Luckily for me everyone clearly understood that the book is about how The Simpsons reflects concepts or ideas from economics, not about how much money Matt Groening has made from the show!

The book is organized into three sections. Because The Simpsons is primarily about the Simpsons family and the other residents of Springfield, the book focuses primarily on microeconomics. Microeconomics is the study of human behavior in small units, such as individuals, families, or firms. The first three chapters constitute Part I, and they deal with “the economic way of thinking” and primarily focus on understanding individual behavior and decision making. I tell my students that studying economics is like putting on a pair of glasses that let you see the world in a different way. The basic economic lessons about individual behavior, the market process, and tracing out the effects of policies are all laid out in these three chapters.

Part II of the book comprises six chapters on “money, markets, and government,” and these essays primarily cover issues beyond isolated individual decision making and behavior. For example, in Chapter 4, West Virginia University’s Andrew Young details how money serves to facilitate exchange and then asks the important question of whether Milhouse can be said to be money. Other important topics covered in this section include how best to understand Homer’s serial entrepreneurship (Chapter 6) and the role of profits and losses (for Homer, mostly losses) in a market economy. Chapters 7 and 8 discuss situations when free markets might not lead to desirable outcomes, such as monopolies and externalities (think Springfield Nuclear Power Plant). The economic analysis of politics concludes this section, as John Considine explains how a television clown such as Sideshow Bob can become mayor. (Really, is it so different than Al Franken becoming senator?)

The third and final section of the book discusses topics in applied microeconomics. Basically, these are the tools of economics that were discussed in the first two parts applied to particular policy areas and topics. So we have explanations of the economics of immigration (Chapter 10), labor markets (Chapter 11), and health care (Chapter 12) as seen in The Simpsons. Mark Thornton, the author of The Economics of Prohibition, tells us in Chapter 13 how Springfield’s experience with prohibition in the episode “Homer vs. the Eighteenth Amendment” is similar to the United States’ experience in the 1920s and 1930s. The social costs of Marge’s gambling problem and other issues related to gambling are dealt with in Chapter 14. An overview of the relatively new field of behavioral economics is given in Chapter 15, and the book concludes with a thought-provoking chapter by Steven Horwitz and Stewart Dompe on how changes in the lifestyle of the Simpsons illustrate how the economic progress that has occurred over the past two decades is contrary to some economic statistics.

While this book is in not meant to be a comprehensive introduction to economics (after all, most economics textbooks run several hundred pages long), it does encompass the basic concepts covered in any principles textbook as well as provide a look at how economists think about topics such as health care and politics. While many popular economics books eschew foot- or endnotes, I encouraged my authors to provide notes to accessible articles and texts that curious readers can follow to learn more about a topic. Most important, however, I hope you find that this book lets you revisit your favorite Simpsons episodes while at the same time giving you a new perspective on them.

3. For an excellent overview of the evolution of the phrase homo economicus, see Persky (1995). McCloskey (1993) points out that while it has come to mean “economic man,” homo economicus is more appropriately translated as “economic human.”