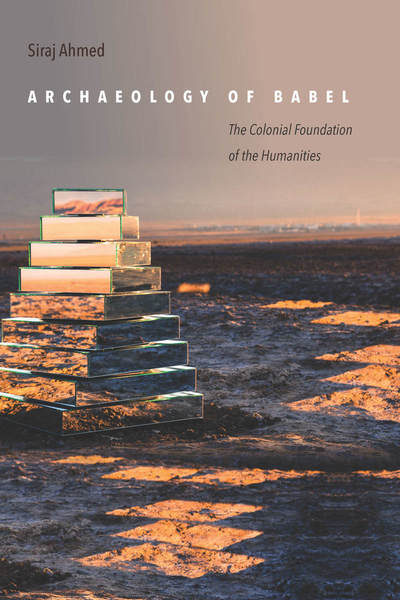 This chapter reconsiders Edward Said's call for a return to philology, the consequence of his career-long engagement with Erich Auerbach's work. It argues that Said and Auerbach privileged the new philology because they ignored its colonial matrix. On one hand, the new philology annulled the dream of recovering the divine language spoken before destruction of the Tower of Babel and preserved this dream in a higher form. The new philology was the science that would make sense of everything human, turning linguistic confusion into total knowledge—hence its attraction to Said, Auerbach, and countless other comparatists. But the new philology's original utility lay in its capacity to reconstruct South Asia's otherwise incommensurable legal and literary traditions and to make them legitimize colonial rule. This chapter places colonial philology at the origins of comparatism and "World Literature": both their materials and their need to be understood as colonial legacies.

This chapter excavates the colonial roots of comparative (or historical) grammar. East India Company scholars used this nascent discipline to reconstruct the languages and literatures they encountered in South Asia. Historical grammar helped produce the Romantic definition of literature to which we still cling: an aesthetic practice attuned to language's performative (or "literary") power. In fact, only after the advent of colonial rule—as European scholars began to re-interpret non-European verbal art according to this standard—could such a definition of literature appear universally valid. Our concept of literature must be understood, therefore, as the product of colonization. It has globalized new philological values while effacing the antithetical practices that helped constitute precolonial traditions. This chapter focuses on Sir William Jones's A Grammar of the Persian of Language and "A Persian Song of Hafiz," a translation of Hafiz's ghazal "The Shirazi Turk."

This chapter studies the origins of colonial law, which sought to define the immanent traditions of the East India Company's Muslim and Hindu subjects. Its premise was that such traditions could be found only in their canonical texts. The identification of a culture's canonical texts and its immanent principles eventually became as fundamental to the methods of literary history as it was to those of colonial rule. But the identification of authoritative texts and immanent traditions has only served to obscure—indeed turn inside out—their actual relationship. To the extent that sharia had been an immanent tradition, it turned not on the production of authoritative texts but rather on practices that defended communities from the dangers of textual authority. Focusing on William Jones's codification of sharia and his translation of the Muallaqāt, this chapter returns to the discursive practices colonial and postcolonial ideologies of the text have eclipsed.

William Jones's Indo-European hypothesis triggered a feverish quest throughout the nineteenth century to reconstruct every language's root words and hence map human development in its historical totality. The humanities are still shaped by the relationship Jones posited between the roots and evolution of languages on one hand and the origins and development of culture on the other. This chapter calls this model into question by studying its colonial history and logic. European philosophers, poets, and philologists identified the dharma texts Jones translated, The Laws of Manu and Śakuntalā, with humanity's original (non-violent or ecological) consciousness. An archaeological approach reveals that these texts were in fact deeply implicated in Indo-European violence: i.e., the burning of the forests, the dispossession and displacement of its inhabitants, and the erasure of their way of life. Ecological sensitivity can belong only to those forms of life that textual culture attempted to destroy.

This chapter argues that states of emergency, which define global politics now, were prefigured in colonial law and philology. In fact, the rule of law in colonial India devolved almost immediately into emergencies, which the East India Company imposed on native populations at its frontiers. The historical function of colonial law and philology was to circumscribe legal authority within the state. The transfer of such authority from the people to the executive is the very definition of emergency. But far from understanding the disturbing relationship between philology (the methodological foundation of the humanities) and the emergency (the global subversion of democracy taking place all around us today), leading theorists instead consider new philological concepts of language the very antithesis of extralegal sovereignty. To move beyond this methodological impasse, this chapter studies Benjamin's "On the Concept of History," which opposed historical method and emergency powers at the same time.