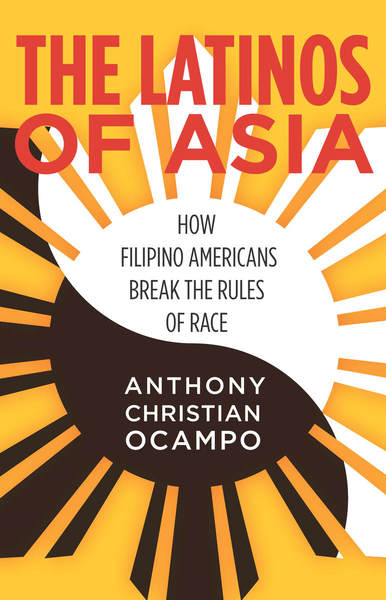 Though classified as Asian by the U.S. Census, Filipinos have Spanish last names, are predominantly Catholic, and frequently encounter racial miscategorization. In other words, Filipinos do not map onto the American racial landscape very neatly, which affects how they experience race in everyday life. This chapter introduces sociological theory relevant to the racial experience of second generation Filipino young adults, who are classified as Asian, but who are culturally linked to Latinos, the emerging new majority in both the city and the state overall. The narratives of Filipinos in Los Angeles illustrate important lessons about the changing dynamics of race relations in an increasingly multiethnic society, how racial barriers persist, and most importantly, how we can break barriers if we more deeply understand the rules of race in everyday life.

Historical colonialism in the Philippines catalyzed the mass migration of Filipinos to the United States at the start of the twentieth century. However, colonialism has had very different effects on how Filipinos adapt to life in the United States, depending on the racial system that they entered. In the early twentieth century, American colonial policies allowed only for the migration of Filipinos who could work in the agricultural industry and other low skilled labor sectors. Meanwhile, back in the Philippines, American colonial policies were rapidly transforming the Philippines' social, cultural, and institutional landscape. Given the cultural and socioeconomic advantages that Filipinos acquired due to American colonialism, they today are much different from their predecessors—they are middle class, they hold professional jobs, and they live in racially integrated neighborhood because they can speak English.

Filipinos do not live in ethnic enclaves. They do not have to. As the previous chapter notes, Filipinos come to this country with socioeconomic resources and a cultural proficiency with the United States that most other immigrants do not possess. Instead, their children grow up in neighborhoods that are middle class and multiethnic. In many ways, their neighborhoods are a preview into the United States of tomorrow. Given the class and racial composition of their neighborhoods, second generation Filipinos come into their ethnic identity differently from other Asians. Other Asians rely on the dense presence of ethnic institutions and homogenous social networks to learn about their ethnic culture. In contrast, Filipinos spend time learning about ethnicity in their families and church.

4 The Latinos of Asia
chapter abstract

Growing up in Los Angeles, Filipinos develop a keen awareness of the cultural traits they share with Latinos that can be traced back to Spanish colonialism, such as language, last names, and Catholic religion. This shared sense of peoplehood that Filipinos and Latinos develop emerges not through conscious political coalitions, but rather through mundane everyday interactions in the most intimate spaces of neighborhood life. Even though Filipinos are Asian, they do not all live with other Asians, which in turn affects their ability to identify with them panethnically—many Filipinos are openly ambivalent about pan-Asian identity.

5 Getting Schooled on Race
chapter abstract

Within public middle schools and high schools, which are more socioeconomically diverse and strongly enforce an academic tracking system, Filipinos become distant from their Latino peers due to the divergent ways that teachers and administrators racialize them. Within the educational context, to be Asian is to be a model minority (and vice versa). In the absence of other Asians within the district, Filipinos are more inclined to enroll in the honors and college preparatory tracks, given their socioeconomic advantages over Latinos and other minorities. Their tracking patterns lead to school experiences, which in turn facilitate a sense of Asian racial consciousness—one that is based on the model minority stereotype, rather than culture. For example, Filipinos receive preferential treatment and greater academic push from teachers, which in turn cultivate this Asian American consciousness. Within Catholic schools, the campus climate is intimate, and Filipinos develop deeper connections with their Latino peers.

6 "Filipinos Aren't Asian" and Other Lessons from College
chapter abstract

In college, Filipinos encounter new rules of race related to their underrepresentation, social activism, and educational politics that they generally do not deal with within neighborhoods and their earlier schooling. Because of their residential patterns of in Los Angeles—their tendency to live in neighborhoods with large numbers of Latinos, rather than other Asians—college is the first opportunity that many Filipinos have to interact more intimately with other Asian ethnicities. In addition, Filipinos' status shifts from high school to college dramatically. In college, Filipinos experience unusually high rates of attrition and, on some campuses, even have the designation of "targeted underrepresented minority." Their increased traffic with other Asians, along with the shift in racial context, prompt many Filipinos to socially distance themselves from other Asians and disidentify from the racial label. Their status and experiences as underrepresented minorities reinforce their connections with Latinos and other non-Asian minority students.

The rules of race not only vary by neighborhood and school context, but also by life stage. This chapter narrates the story of Eileen, a Filipina American woman from Carson who has "identity crises" and "identity epiphanies" through her experiences at a public middle school, a private high school, a public university, and most recently, in medical school. Eileen's narrative shows how one person consciously navigates the varying social constructions of both Asian American and Latino identity through different stages of her personal life and education. In her story, Eileen went from strongly identifying as Asian American (in high school) to actively disidentifying from other Asians (in college) to developing a panminority identity with her Latino undergraduate and graduate student peers (in college and medical school).

Filipinos admit feeling "in-between" Asians and Latinos, which makes it difficult for others to map them onto the American racial landscape. To complicate matters more, they seem to fluctuate between Asian and Latino racial identification differently between neighborhoods and schools, and between childhood and adulthood—this is because the rules of race change in these different contexts and life stages. Filipinos transgress racial boundaries on a regular basis. This chapter closes with discussions of how Filipinos' unique racial experiences may influence their political involvement, their labor market outcomes, and even their love lives.