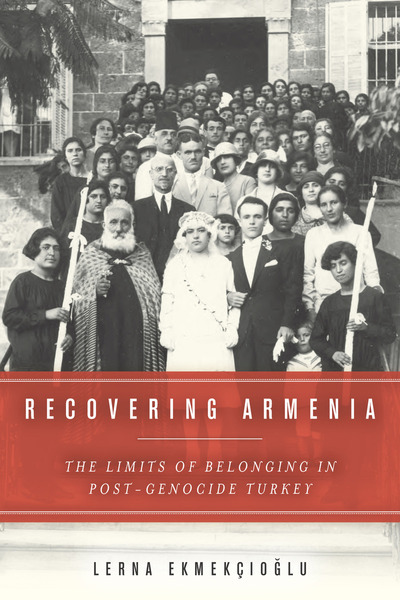 Contents
Excerpt from the Introduction
Preface
Contents and Abstracts
Introduction: Afterlife of Armenians in Post-Genocide Turkey, an Introduction
chapter abstract

The introduction introduces the protagonist of the story, Hayganush Mark, the Constantinopolitan Armenian woman who published the main primary source of the book, Hay Gin (Armenian Woman), a feminist biweekly, from 1919 to 1933 in Istanbul. The chapter clarifies the research questions that drove the writing of this book and explains what kind of a route was taken to answer them. The analytical core of the chapter revolves around the historical explanation of why and how a gendered way of organizing social relations was fundamental for Armenians as they adjusted to the multiple catastrophes that befell them from the World War I into the mid-1930s.

1 The Re-Birth of a Nation
chapter abstract

The story takes place in Allies' occupied Constantinople from late 1918 to late 1922. During this time Armenian leadership aimed to cede territory from the defeated Ottoman Empire and declare independence. Their goal was to unite the Eastern and Western parts of the Armenian ancestral lands. The chapter looks at the ways in which this goal was enmeshed with a broader agenda called National Revival or Restoration. Post-genocide Armenians mobilized to prove "the Turk" wrong and exist as a community, as a nation, and as a state. They have imagined these agendas in familial and gendered terms whereby children, most of them orphaned, represented the future.

Armenians of Constantinople experienced the war years different from their counterparts in other parts of the Empire. They were not massacred or deported en masse. Therefore in the aftermath of the war, they were the ones who helped the survivors through various relief organizations. Elite, intellectual women of the Ottoman capital were very active in these endeavors and they also contributed to all other kinds of National Revival-related causes, such as fundraising, lobbying, and propaganda. In return, they asked to have a say in the decision making bodies of their community. This chapter focuses on the ways in which feminists formulated their arguments for the inseparability of the women's cause from the national cause. They established a Women's Association and began publishing a feminist fortnightly called Hay Gin (Armenian Woman)

3 An Exodus and its Aftermath
chapter abstract

This chapter focuses on one single year, from late 1922 to late 1923 when it became obvious that Armenians failed in their territorial goals. As a result of the Turkish War of Independence which was led by Mustafa Kemal, Ottoman Muslims drew the occupation forces out and forced the Allies to renegotiate a peace treaty. In the fall of 1922, after the Symrna Catastrophe (Kemalist takeover of Western Anatolia from occupying Greeks), Armenians (and Greeks) in Constantinople fled the city in panic, in anticipation of Kemalist entry to the city which could unleash violence against Christians whom Kemalists and the Muslim majority accused of collaboration with the enemy. Most people that we encountered in the first and second chapters of the book leave the city during this time. The remaining become an officially recognized minority in Turkey according to the terms of the Treaty of Lausanne.

The chapter looks at the communal survival strategies that Turkish Armenians crafted in order to stay put and remain safe in a place where they were unwanted by the state and by the majority. Armenians performed loyalty to the state and in returned hoped to receive freedom of religion and traditions. This formulation was gendered. Because women represented and were seen as the transmitters of tradition, they were assigned the task of ensuring the continuation of Armenianness in Turkey. The ways in which Armenians adapted to the new Turkey's conditions rested on an age-old relationship between the Ottoman state and its non-Muslims (dhimmis). But Turkey was very different from the former Empire, especially after the secularization and westernization reforms that the Kemalist Republic passed in the 1920s and 30s. Armenians welcomed these developments. This new-but-old state-minority relationship is termed "secular dhimmitude," a consciously paradoxical term.

The ways in which the Turkish state discriminated against Armenians and the legacies of the recent, violent past, pushed the community into an enclave-like existence. As Armenians turned in on themselves they cherished domesticity, conservatism, and status quo. The chapter follows the Hay Gin journal to see how both the nationalist and feminist discourses changed in its pages. Because the editor of the journal, unlike most of her peers, did not leave Turkey, her case provides an emblematic case of what Armenians had to do in order to survive the new Turkey. Feminists were faced with a dilemma. On the one hand, they wanted to continue the Armenian tradition. On the other hand, their liberal progressive ideas that demanded gender equality required a change in the hierarchical order of the community. The chapter analyzes how Hayganush Mark, Hay Gin's editor tried to resolve these challenges.

The chapter summarizes main points of the book. It briefly discusses its interventions into the historiography. The last part narrates how young Armenian women in early 2000s Istanbul resurged an interest in the history of Turkish Armenian feminism.