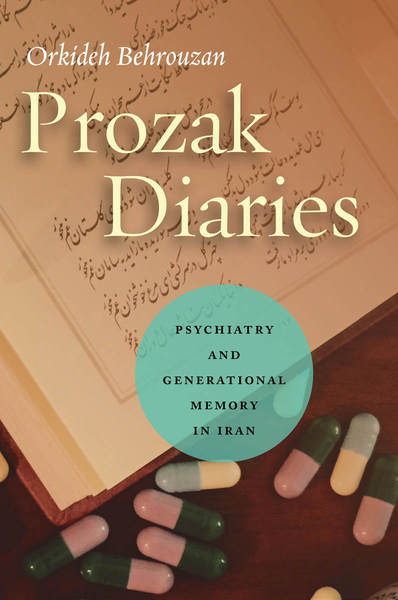 Excerpt from Chapter 1
Table of Contents
The Anthropologist

It all began with depreshen: how people were talking about it, online or offline, discussing it in casual daily talk along with other psychiatric metaphor and diagnostic or therapeutic terminology. What to think—I started asking ten years ago—of the growing circulation of varying epidemiological and clinical data and the seemingly casual usage of psychiatric vernacular in everyday life? Surely, not everyone related to psychiatric diagnoses nor to medication. But what was striking during the 1990s was how a clinical discourse was inserting itself in the way people spoke about life, how psychiatry had entered the common langauge and zeitgeist, and how life was at times expressed in new psychological and psychiatric terms. What was once articulated in the richly layered poetics of the Persian langauge was now becoming part of a clinical discourse on mood and affect.

At first glance, it would be too easy to take such clinical articulations at face value and to interpret the spread of psychiatric talk simply as an indication of a surge in (psychiatric) illness or other such generalizing conclusions about Iranian society. But a nuanced analysis of an emerging discourse should explore it, foremost, as a signifier of changing cultural interpretations. How and when did this change come about? What was happening in the language? How do clinical terms inject themselves in our daily lives? What cultural work do they perform? How would doctors explain this shift in articulation and interpretation? And how had psychiatry as a discipline emerged and evolved in its Iranian context in the first place?

Indeed, since the 1990s, depression has become less stigmatized; the use of antidepressants, Prozac included, has surged globally, with distinctive variations in different parts of the world in prescribing, in consumption, and in how patients talk about their medicalized reliance on psychopharmacological solutions. But each context has its own story, each language its own psychological grammar. How could this happen, one might ask, in a society where lively youth have made strides in realms from the sciences to sports and the arts? I thus turned to the narratives of psychiatrists and patients alike: How did Iranian psychiatry operate? And what were the stories behind terms such as depreshen?

Stories choose and change us by the ways in which they compel us to listen and the energy with which they keep returning. The stories that have been entrusted to me (of what psychiatry would call depression, ADHD, or PTSD) have, at different points, transformed, overwhelmed, and perplexed me. Above all, they have humbled me. Their narrators taught me much about storytelling. I set out to communicate and interpret (if such a task is even possible) the experience of young people who were diagnosed with depression or identified themselves as depress. I learned instead the languages and modes of thinking that they used to interpret and make life and its complexities intelligible. Psychiatry is now one of those languages, pathology one of those modes of thinking.

But what about hope? These were as much stories of hope as they were of depreshen, cycles of hope and despair merging with performative claims to dysphoria. How is one to write about depression in a way that would convey the compelling presence of dysphoria infused into the simple pleasures of daily life? How is one to talk about the desires and hopes behind clinical decisions and still walk the fine line between the white and the black? It is never easy to write about the gray.

Inevitably, these narratives of illness come from interviews with psychiatrists and individuals who performatively identify with psychiatric categories or medication; they are not meant to represent everyone. The accounts presented throughout the book also belong to a range of diverse ideological persuasions; my analysis specifically aims to look beyond them to discover what they share and reveal, psychologically, clinically, and culturally. Understanding medical subjectivities in their own cultural frames has for long been an urgent call in anthropology; but it is even more so today, not least because we have become habituated to partial and black-and-white representations of (Iranian) youth in the Western media that swing between extremes, from sensational accounts to sweeping generalizations, from tales of rebellion to narratives of subjugation. But there are many stories in between, where ordinary life happens. They are scattered in a multitude of fragmented scenes and ought to be investigated as such. I try to write of such fragments that are pieces of a larger puzzle other scholars’ work will complete. I turn to stories of the everyday, of illness and ordinary life, of doctors and patients, of the life of psychiatry itself, and of varied moments of joy and sorrow that compose most lives. I write in the belief that to write about psychological conditions does not take away the hope that still persists in likely and unlikely corners of life.

It all began with words, why we choose them, how we use them, and what cultural forms they generate. This book is an exploration of language as experience; in other words, an exploration of how clinical interpretations become part of ordinary life and discourses of affect. Since the time this research was conducted much has changed and much has evolved, both internally and externally, this brief note included: I started writing it during early fieldwork and ended it during the final revisions of the manuscript. It took years to rethink and refine, to write and rewrite. Over the years, the story of the evolution of Iranian psychiatry simultaneously started telling the story of new cultural formations and situated attempts at making life intelligible in a clinical language. Through the lens of psychiatry, this book tells the story of how stories are told. My hope for it is to challenge some of what we assume we know.