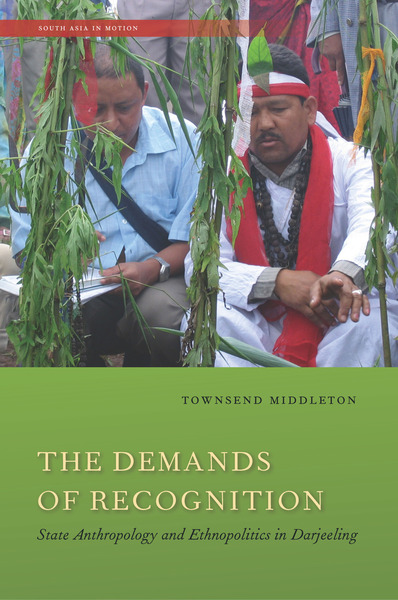 Contents
Excerpt from the Introduction
Contents and Abstracts
Introduction: Becoming 'Tribal' in Darjeeling: An Introduction to the Ethno-Contemporary
chapter abstract

This introduction lays out the book's designs for an anthropology of the ethno-contemporary. Calling on examples from the around the world, Middleton defines the ethno-contemporary as an arena of struggle—wherein communities, governments, NGO's, the United Nations, and others are putting ethnology to old and new uses to reshape the prospects of marginalized and indigenous communities at the global level. Within India, the introduction covers the rising politics of affirmative action that have attended economic liberalization since the 1990s. Examining these escalating demands, Middleton elucidates the quandaries of late liberalism. Turning to Darjeeling, he further explains how the tribal movements of the 1990s and 2000s emerged out of a violent history of subnationalist struggle. Situating Darjeeling's tribal turn at this conjuncture of global, national, and local dynamics, the introduction thereby establishes the book's analytic frames, while introducing the communities and government anthropologists who feature throughout its chapters.

Chapter 1 explores the shifting terms—and energies—of identity and its politics. Blending historical and ethnographic analysis, the discussion moves from the colonial period to the bleeding-edge of subnationalism today to trace the unsettling histories, anxieties, and desires that animate life and politics at India's margins. The analysis reveals the deep-seated anxieties over belonging—what Middleton calls anxious belongings—that fuel Darjeeling's movements for recognition and autonomy. Through time, these anxieties over being-in and being-of India have made for a categorically searching politics, where the terms change but the conditions of exclusion remain troublingly the same. Historicizing the recent shift from Gorkha to tribal politics, Chapter 1 unearths the conditions driving communities into such intermittently violent and ethnological relations with the state and themselves. Doing so, it develops the tribal turn as a case study of the ethno-contemporary's global contours and intensely local forms.

2 Durga and the Rock: A Colonial Category and its Discontents
chapter abstract

Chapter 2 examines the origins of ethnological governmentality in India, focusing on the colonial history of tribal recognition. It uses ethnographic material to launch an historical investigation of how particular ethno-logics—in this case, the binary of castes vs. tribes—become fixtures of state policy and the popular imagination. Middleton examines ethnology's checkered history in India to offer a new reading of 'colonialism and its forms of knowledge'. Despite the conspicuous coloniality of the category tribe, tribal recognition was seldom stable. Through archival readings, Middleton shows it was not epistemic hubris, but rather uncertainty that drove the know-and-rule rationalities of the British. Moving from history to the present-day, he illustrates how colonial knowledge and its uncertainties have come to shape the prospects of millions in postcolonial era—including the people of Darjeeling. This analysis consequently reveals the often-messy pasts that undergird the ethnologically affected present.

Chapter 3 argues tribal recognition to be a postcolonial problem demanding postcolonial answers. After independence, tribal classification assumed a form and certainty eclipsing its colonial antecedents. Turning attention to these dynamics of postcolonial knowledge, power, and policy, Middleton asks how a troubled colonial category became a centerpiece of postcolonial social justice. The analysis moves from B.R. Ambedkar and the Constituent Assembly Debates of the 1940s, through decolonization, and into the makings of India's multicultural democracy. It chronicles the development of a markedly Hindu-centric liberalism that continues to structure affirmative action and the management of diversity across the subcontinent. With one eye on the postcolonial state and the other on Darjeeling's aspiring tribes, Middleton documents the real-life impacts of these decidedly postcolonial forms of knowledge and power.

Chapter 4 offers an ethnography of state ethnography itself. The analysis graphically portrays an Ethnographic Survey in 2006, wherein the people of Darjeeling attempted to prove their tribal identity to the anthropologists of the Indian government. The narrative takes the reader into the 'emergency meetings' and eleventh-hour preparations of the communities under investigation, before shifting to the spectacular events of the survey itself. Revealing the competing ethnological tactics of anthropologists and communities alike, Middleton shows the survey to be an interface in every sense of the word. While the event extended a long history of ethnological governmentality, it also signaled new developments on the horizons of ethnic becoming. Framing the survey, then, as a signature moment of the ethno-contemporary, this chapter offers a fundamental rethinking of the proverbial encounter of 'anthropologists and tribes'.

Chapter 5 charts the inner-workings of today's ethnographic state. Through an anthropology of bureaucracy, the chapter follows government anthropologists as they produce and defend their soft science in the hard places of late liberal governance. Investigating affirmative action from the inside-out, Middleton exposes the impossible demands placed upon these civil servants. On the one hand are communities in need; on the other is an under-resourced affirmative action system, crosscut by contending political agendas and technocratic persuasions. Exploring the quandaries of government anthropologists and their knowledge, this chapter illustrates the hierarchies of expertise that constitute this form of 21st century governance. Middleton goes on to show how these politics within the state impact communities aspiring to the government's care. Chapter 5 provides a necessarily humanized understanding of the operations and operatives of ethnological governmentality today.

6 Reforming the Subject: The Effects and Affects of Recognition
chapter abstract

Chapter 6 examines the social, subjective, and affective dynamics of becoming a 21st century tribe. The ethnography focuses on the efforts of ethnic associations, political parties, and everyday citizens to remake the tribal subject. Buoyed by the prospects of affirmative action and autonomy, Darjeeling's tribal movements induced sweeping sensations of ethnic rebirth, but also considerable controversy, confusion, and division. Sorting through these intended and unintended outcomes, Middleton explores how the logics of tribal becoming do and do not make their way into the body and body politic. This chapter's phenomenological analyses offer a balanced look at the positive and darker sides of indigeneity. The vignettes provide intimate portrayals of the hopes, tensions, and ambivalences that marked the tribal turn in Darjeeling. These findings consequently raise pressing (and uncomfortable) questions about how ethnology is being used within contemporary social movements—indigenous, tribal, and otherwise.

7 Perpetuated Paradigms: At the Limits of Ethno-Intelligibility
chapter abstract

Asking what happened after the tribal turn, Chapter 7 covers a shocking series of events by which a television show, Indian Idol, sparked a violent political upheaval. With the birth of a new Gorkhaland Movement in 2007, the terms of mobilization suddenly shifted from tribal back to Gorkha. Like its tribal predecessors, Darjeeling's latest Liberation Front mobilized idioms of indigeneity to render identity anew. Also like its tribal predecessors, the movement failed. Transferring the onus of failure from communities and to the state, Middleton uses these developments to expose the strictures and changing conditions of late liberalism in India. Asking what is old, what is new, and what alternatives exist for minorities amid the state's blinkered grids of ethno-intelligibility, he advocates for a deeper, more historical reading of the ethno-contemporary—one agile enough to track its fluctuating forms, while grounded enough to reveal its enduring exclusions and affects.

The epilogue steps back to consider what this book's findings mean for communities, governments, and the human sciences. Written in dialogue with postcolonial theory, it addresses the benefits and dangers of ethnographic critique amid the emerging 'lives' of ethnology in the world today. Middleton frames the ethno-contemporary as an intellectual problem and opportunity. The book concludes by offering thoughts on how the 21st century ethnographer might navigate its protean contours and work with its various 'tribes' (anthropologists included) to develop new modes of recognition—and new ways of being—that can better serve us all. Amidst this ethnologically affected present, thinking beyond our current systems of recognition promises to be vital for forging an alternative future.