STANFORD
UNIVERSITY PRESS
Souffles-Anfas
A Critical Anthology from the Moroccan Journal of Culture and Politics
Edited by Olivia C. Harrison and Teresa Villa-Ignacio 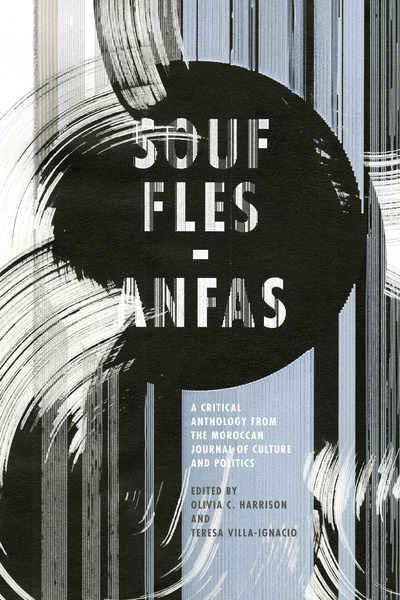 The introduction presents the history of the journal from 1966, when it was founded, to 1972, the year it was banned, a period that coincides with the beginning of the "years of lead," as the oppressive regime of Hassan II is known in Morocco, and discusses its evolution from Francophone poetry review to French and Arabic tribune of the radical left. The editors situate the journal's founding mission of "cultural decolonization" in relation to the seminal writings of postcolonial theorist Frantz Fanon and Maghrebi writers of the previous generation, such as Kateb Yacine, Malek Haddad, and Albert Memmi. After a brief explanation of the selection and translation of texts included in the anthology, the introduction ends by assessing the journal's enduring legacy in Morocco, the Maghreb, and the decolonizing world, and presents it as a precursor to the recent pro-democracy protests across North Africa and the Middle East.

This section begins with the incendiary manifesto-prologue of the founding issue of Souffles, which breaks with previous attempts to imitate French poetry and announces a new era of aesthetic innovation. In addition to poetry by Abdellatif Laâbi, Mohammed Khaïr-Eddine, and Abdelkebir Khatibi, this section includes a long essay on popular Moroccan poetry by Ahmed Bouanani, a scathing critique by Abdallah Stouky of the 1966 World Festival of Negro Arts held in Dakar, and of the philosophy of Negritude that subtends it, and an essay on Maghrebi novel by Khatibi.

This section is book-ended by two important editorials by Abdellatif Laâbi on the decolonization of Moroccan culture, a double process involving a sustained critique of Orientalism and the elaboration of non-derivative literary forms. Laâbi's defense of a novel by the Moroccan writer Driss Chraïbi as well as his fascinating interview with Chraïbi and a short autobiographical text by the Tunisian writer Albert Memmi are also included in this section, which is heavily focused on literary and artistic expression. The final essay, by the art critic Toni Maraini, presents the artwork of the "Casablanca group," as the graphic artists involved in the creation of Souffles are known. Alongside works by Souffles-Anfas artistic directors Mohamed Chebaa and Mohamed Melehi, this section includes reproductions of artwork by Jilali Gharbaoui, Ahmed Cherkaoui, and other pioneers of modern Moroccan art.

This section includes three bilingual issues featuring French-language poems by Mostafa Nissabouri, Mohammed Ismaïl Abdoun, Tahar Ben Jelloun, and Adbellatif Laâbi, and Arabic-language poems by Mohamed Zafzaf and Ahmed al-Madini, introduced by the noted critic and writer Mohammed Berrada. The journal sharpened its critique of Orientalism and racism during this period with a condemnation by the Haitian writer René Depestre of François Duvalier's oppressive regime—informed, according to him, by an essentialist version of Negritude—a biting critique of Albert Camus by founding member Bernard Jakobiak, and a sympathetic interview with the French anticolonial theater director Jean-Marie Serreau that nevertheless warns against the danger of appropriated Third World theater for European consumption.

This section begins with the fifteenth issue of Souffles, devoted entirely to the Palestinian question, and ends with a poem by the Sudanese poet Muhammad al-Fayturi published in the last issue of Anfas, the companion Arabic-language journal launched in 1971 and banned alongside Souffles in 1972. This final period of the journal is marked by a clear engagement for Palestine, as evidenced in its special issue and subsequent editorials, as well as for other anticolonial and leftist causes, most notably the struggles for independence from Portugal in Africa and the plight of Vietnam. Adopting a more accessible format and tone and an overtly Marxist-Leninist editorial line, Souffles-Anfas became the tribune of the Moroccan radical left in the closing years of the 1960s, and one of the first victims of the clampdown on freedom of expression and opinion in Morocco.